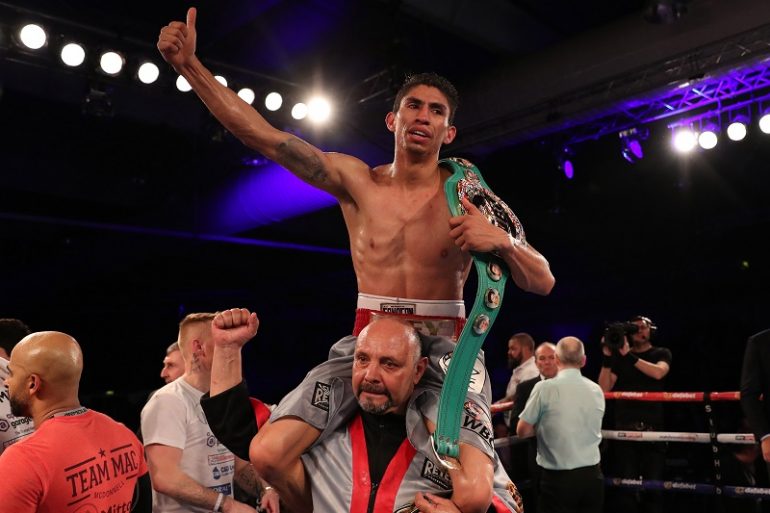 Rey Vargas is hoping to get back on top. Photo by Lawrence Lustig
05
Apr
by Mike Coppinger

Rey Vargas is preparing for yet another title defense on HBO.

Since the Mexican signed with Golden Boy Promotions last year, Oscar De La Hoya has kept him busy in prime slots. On both occasions, Vargas was paired with future hall of famer Miguel Cotto on HBO. The lanky 27-year-old topped Ronny Rios and then Oscar Negrete in December, and he’ll once again comepte on the network.

Vargas (31-0, 22 knockouts) will defend his junior featherweight strap against Avat Hovhannisyan on May 12 in Verona, New York, it was announced Thursday. The fight will provide support to the junior middleweight title bout between Sadam Ali and Liam Smith.

“I’m ready to make the third defense of my world title in what will be the next step of a historic career,” said Vargas, THE RING’s No. 3 junior featherweight. “I’ve faced the best contenders since becoming world champion, and May 12 will not be the exception.

“Hovhannisyan is explosive and fast, but I will be prepared to win in exciting fashion to show that I’m the best super bantamweight in the world.”

Hovhannisyan (14-2, 11 KOs) is a rough-and-tumble Armendian who stamped his ticket to a title opportunity with a sixth-round knockout of Rios last month. The 29-year-old is stepping up to another level with this assignment, but he’s confident he can spring the upset.

“This is the most important fight of my career,” said Hovhannisyan, who lost his pro debut. “I’ve prepared for this fight my entire life. Vargas is a great champion and this will be a hard fight, but I will do anything it takes to win this title.”

With Hovhannisyan’s non-stop pressure style, the matchup figures to provide plenty of fireworks, even if Vargas will be a decided favorite.