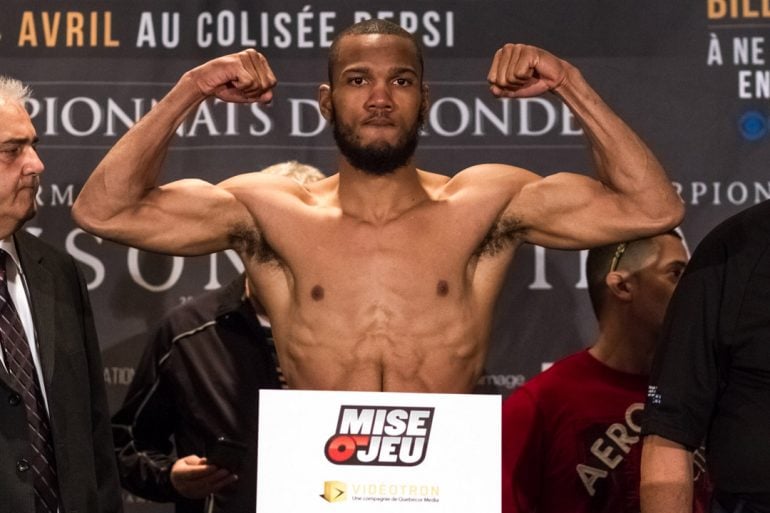 When RingTV asked Julian Williams what was the one thing he needed to correct after suffering the only loss of his career — a fifth-round knockout to Jermall Charlo in 2016 — the junior middleweight contender replied:

Williams (24-1-1, 15 knockouts) didn’t care to elaborate on his one-word answer, but perhaps he meant taking his time with the Charlo fight? Prior to the bout, Williams was extremely vocal about how easily he would dispatch of the defending IBF 154-pound titleholder and even badgered Charlo when ringside for one of his fights. And then, in five rounds, Willams rushed in and was smashed by a highlight-reel uppercut that ended his night. Could that be the patience he was speaking of? 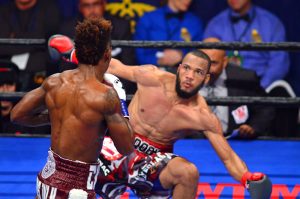 An overconfident “J-Rock” got a taste of Jermell Charlo’s power in December 2016. Photo by German Villasenor

Maybe he meant that he needed to demonstrate more patience before rushing into a fight. He talked so much before his first title shot that it could have had him underestimating Charlo as an opponent. Either way, that loss has changed the fighter known as “J-Rock.”

Since the loss, Williams has bounced back with a knockout of Joshua Conley and a hard-fought unanimous decision win over Ishe Smith. But Williams hasn’t mouthed off like he did against Charlo. And heading into Saturday’s Showtime-televised fight with Nathaniel Gallimore (20-1-1, 17 KOs) at the Hard Rock Hotel and Casino in Las Vegas, it’s Williams who is on the receiving end of the trash talk this time around.

“I haven’t been doing interviews nor have I been on social media as much. I’m focused on this fight,” Williams said.

Gallimore is doing exactly what Williams did before his fight with Charlo. He’s trashed Williams in a number of interviews and re-branded him as “J-Pebbles” because he considers him “soft.” But Williams is unimpressed in what Gallimore has to offer verbally and in the ring.

“He’s backing himself into a corner,” Williams said of the one-way trash talk. “He has to back up those words he’s saying. Overall I think he’s a solid fighter, a good test and it should be an entertaining fight.”

Gallimore has been rolling as of late, with seven straight finishes since dropping a decision to Virgilijus Stapulionis back in 2016. But Williams isn’t impressed at all with what Gallimore has accomplished over the past year.

“I think Gallimore has performed decently against the competition he’s had,” Williams said with a smirk, obviously taking note of the opposition that his opponent has faced up to this point in his career. “He got beat by a journeyman and had a draw with another journeyman. I’m not underestimating anybody but he seems to have gotten hot at the right time, but we’ll see if he brings it on Saturday night.”

A younger Williams might have engaged in the verbal sparring but this 27-year-old version prefers to let his fists do the talking. He’s aware that the knock on him is that he doesn’t have a chin. However, Williams will contend that is certainly not the case and his opponent is in for a world of hurt. But Gallimore’s bold claim that he’ll knock him out only draws laughter from J-Rock.

“He said he’s going to knock me out, but that’s really the only way he could possibly win,” he said. “One lucky punch. He can’t outclass me so that’s all he’s banking on. He saw one glimpse of vulnerability and now he thinks I don’t have a chin. But he’s been knocked down four times in his career.”

Williams refuses to underestimate Gallimore but it’s clear that he’s enjoying watching his opponent dig his own proverbial grave. All the Philly fighter is doing is laying in wait until the first bell rings.

With the 154-pound division brimming with talent, Williams sees himself in the mix. But as much as he wants to rush back in there with the best, he realizes that it’s one step at a time.

That certainly has to be the patience that Williams is talking about. We’ll just have to see if it pays off on April 7.