Caleb Truax and the lessons of loss 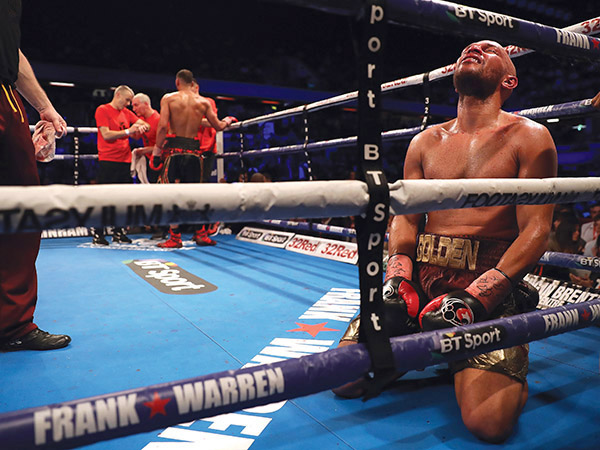 It used to be that coming back from a loss was part of the graduate education of a serious professional boxer. “Money” and Marciano aside, all the greats had nights when they had to suffer the gut punch of having to watch their opponent’s hand raised.

However, perhaps because of the money undefeated Floyd Mayweather raked in, many fighters today are afflicted with a phobia about losing. They either pad their records with veritable pillow fighters or, when they lose, there goes their all-important swagger and confidence.

Recently crowned super middleweight titleholder  Caleb “Golden” Truax (29-3-2, 18 knockouts) has never feared testing himself against the best. A former pigskin and baseball star, Truax started boxing after he suffered a knee injury on the gridiron. As a 19-year-old student at the University of Minnesota, Truax entered a couple of Toughman Contests and soon found out that exchanging punches could replace the pleasure of making tackles.

After a short amateur career, Truax made his pro debut in 2007. Instead of feeding the young lion a bunch of easy meals, promoter Tony Grygelko and manager Ron Lyke resolved that Caleb would get his fistic upbringing with a steady and diverse diet of gritty and talented fighters – boxers, punchers, southpaws, righties … you name it. 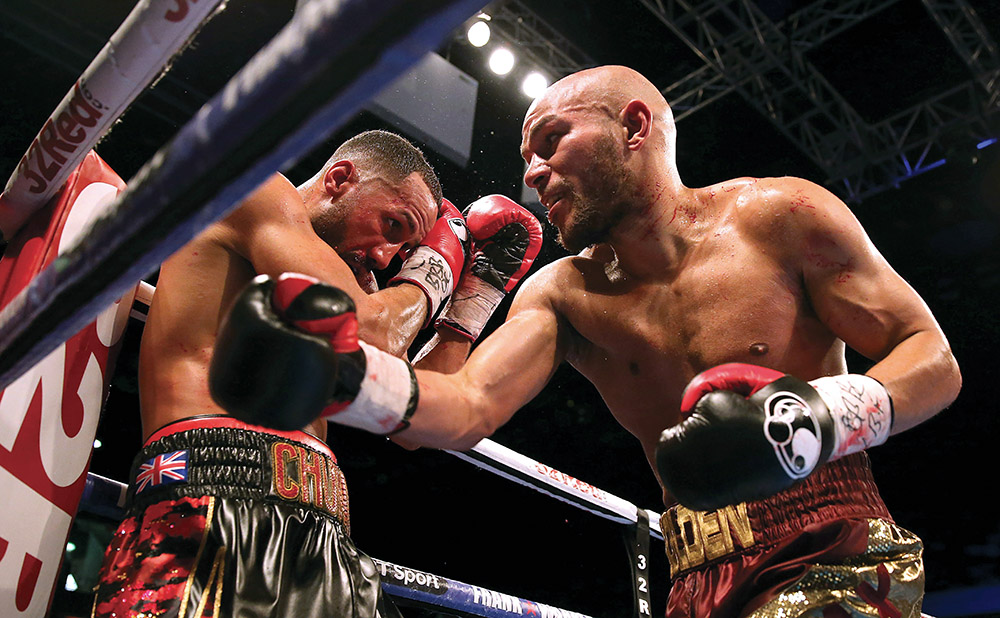 A native of Osseo, Minnesota, Truax copped the IBF 168-pound belt in December with a majority decision over James DeGale (23-2-1, 14 knockouts). Considered a tune-up opponent, the underdog traveled to England and whupped DeGale in his own backyard.

On the way to becoming only the second Minnesotan in modern times to win a world title (St. Paul native Will Grigsby earned 108-pound titles in the 1990s and 2000s), Truax had endured defeat at the gloved paws of former champ Jermain Taylor, a draw with veteran Ossie Duran and, with some victories mixed in, knockout losses to Daniel Jacobs and Anthony Dirrell.

After the first-round stoppage to Dirrell in April 2016, Truax admitted, “I was very close to quitting.” But as a graduate with a major in sociology and a minor in African-American Studies, Truax took a lesson from those drubbings, saying, “From the fights with Jacobs and Dirrell, I learned that to be at that elite level you have to pour your heart and soul into it. You have to be mentally ready, physically ready. Everything, man. That’s what I was able to be and prepare myself for this last fight.” Recalling his triumph, Golden said that by the time of the DeGale fight, “I was just ready to roll. I took ten and a half years of experience and wrapped it into a couple of right hands.”

Truax fought brilliantly against DeGale. According to his longtime trainer, Tom Halstad, “Caleb’s punch output was higher than it has ever been. He was strong. His jab was working.”

An amiable and wise master of mayhem, Truax explained that his gridiron background helped him win the title. Maybe because they don’t want to spike their nerves, a lot of boxers leave watching film to their trainers. Not Truax. He explained, “Coming from a football background, I was used to watching film.” He noted, “I must have watched his (DeGale’s) fight with Badou Jack 30 times. Our whole team would watch film, and then we would get together, compare notes and come up with a fight plan.”

‘I took ten and a half years of experience and wrapped it into a couple of right hands.’  – Caleb Truax

The clips revealed that the 2008 Olympic gold medalist was slick, that Truax couldn’t outbox him in the center of the ring, but that DeGale didn’t appreciate getting pressured and liked to lay squared-up on the ropes.

Truax and company concluded, “I had to make it a dogfight.” And he did, overpowering his southpaw opponent with punishing bodywork, double jab-right hand combinations and the Duran/Tyson special: right hook to the body, uppercut to the chin.

According to Lyke and Halstad, Truax’s ability to keep his weight centered and not fall in as he attacked was a key to his surmounting the super middleweight peak. 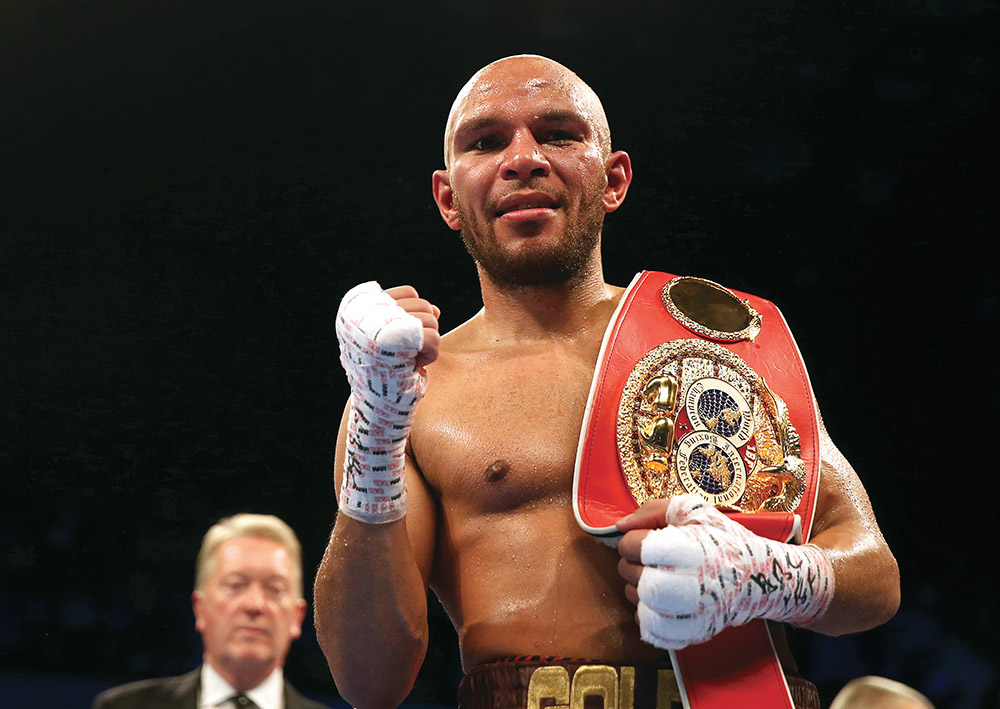 Asked about the moniker “Golden,” Grygelko explained that he came up with it because Caleb was a “Golden Gopher” (University of Minnesota). But Lyke added, “No, it is because Caleb is perfect. He eats right, trains hard. He listens.”

Perfect? Lyke grinned and corrected, “Well, near perfect. He could stop dropping his left hand and jab a little more.”

It would have been remiss not to ask the obvious: What did it feel like to win the title? Shaking his head as though the big night were yesterday, Truax responded, “Fantastic. It’s every fighter’s dream … I still can’t find the words to describe it.”

Like Mayweather, Wladimir Klitschko and a few others, Truax never gets out of condition, which is to say, he never has to get “back in shape” – a big plus in the world of the ring. But more than anything, Truax has heavyweight resilience. His explanation is simple: “Right from the day one, I learned always to get up when you have been knocked down.” He could have added that if you want to be a world champion, don’t quit after a knockout loss.

The afternoon THE RING paid Truax a visit, he was sparring with junior middleweight gatekeeper Carson Jones. After the workout, he was pressed, “Who’s next?”

The new champ replied, “Well, we are negotiating with DeGale for a rematch either here in Minnesota, Vegas, or England. If that does not work out, I would love another fight with Dirrell. Whoever it is, I want to keep busy and fight two or three times a year. After all, I’m 34 and as much as I love boxing, I don’t plan on doing this forever.”