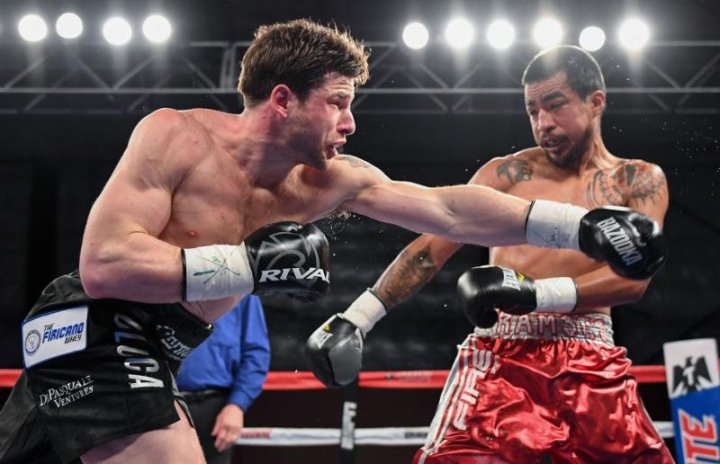 Agaton, who moved up from welterweight to replace original opponent Michael Moore, took the fight to his opponent early. However, DeLuca (21-0, 13 knockouts), a southpaw who served in the U.S. Marines, was more effective and landed the more-telling blows.

DeLuca scored a knockdown in Round 2, although it appeared that Agaton had slipped. The action was sloppy at times and there were several infringements and warnings issued. Agaton, who resides in the Mexico City area, was deducted two points for low blows. DeLuca was deducted a point in the sixth for hitting on the break.

However, it was Agaton who was fading and a barrage of punches with a minute left in Round 7 forced him to go down in a corner. Agaton beat the count, but the bout was stopped at 2:16.

“I knew of him (Agaton) and the opponents he has faced,” said DeLuca after the fight. “He has been stopped once. He was a game guy. When you’re fighting a guy from Mexico, you have to be in shape and you have to be ready. They don’t come easy.”

“I had to be patient. I saw a lot of openings. I knew he was tough, but I didn’t want to get caught with anything. He was willing to exchange so I continued to be patient. That was the toughest thing I had to do tonight.”

In his first fight in just over a year, middleweight Jason Quigley (14-0, 11 KOs) stopped Daniel Rosario in the sixth round.

Quigley, who took time out to recover from an injury to a tendon in his right hand, dropped Rosario (11-4, 10 KOs) twice in Round 6 with left hooks to the body. After the second knockdown, the fight was stopped at 2:51.

Middleweight Yamaguchi Falcao overcame a knockdown in the opening round to win an eight-round unanimous decision over Richar Gutierrez.

Towards the end of the fifth round, the southpaw Falcao dropped Gutierrez (30-18-2 1 NC, 19 KOs) with a right-left combination to the head.