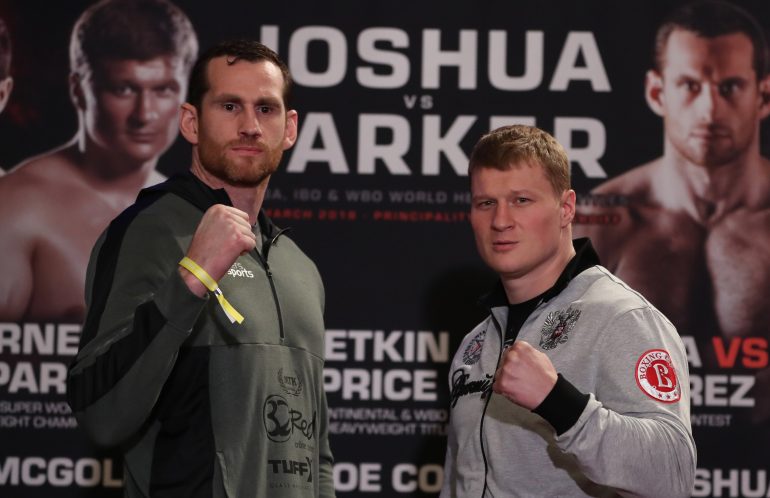 It looked like David Price finally had a chance to rewrite his career after all the disappointment.

The Olympic bronze medalist had already been stopped four time as a pro and was nothing more than an afterthought in the heavyweight landscape, so when his fight with Alexander Povetkin was announced, Price was installed as 10-1 underdog.

After all, Povetkin is THE RING’s No. 4 heavyweight and a dangerous puncher. Price (22-5, 18 knockouts) promised he would put on the fight of his life on Saturday in Cardiff, WAles, and he did.

He survived a Round 3 knockdown and managed to score a knockdown of his own at the bell to end the round, but it wasn’t enough.

Eventually, Povetkin (34-1, 24 KOs) caught up to him, and after he landed a devastating right hand in Round 5, Price was out on his feet, frozen by the shot, and the Russian brutally ended the fight with a loaded-up left hook that Price couldn’t even get his hands up to defend.

Referee Howard Foster didn’t both administering a count as Price lay flat on his back, and now, Povetkin is well-positioned for another crack at a heavyweight title following two positive tests for performance-enhancing substances.

Before the finish in Round 5, Price was boxing well. He seemed to buzz Povetkin with a left hook in Round 1 and he was getting off with combinations on the shorter Povetkin, an Olympic gold medalist.

But then, Povetkin, 38, opened up a deep gash over Price’s left eye with a looping overhand right in Round 3, and followed up later with a leaping left hook that sent his opponent crashing to the canvas.

Price, 34, steadied himself and managed to land a left hand that sent Povetkin wobbling into the ropes, which held him up, for the knockdown.

Povetkin won as expected, even if it was tougher than many believed it would be, and with the fight slated as the co-feature to Anthony Joshua-Joseph Parker, Povetkin looms as a future foe for the winner.