Jason Quigley: ‘I’m here to become a world champion. Now is my time.’ 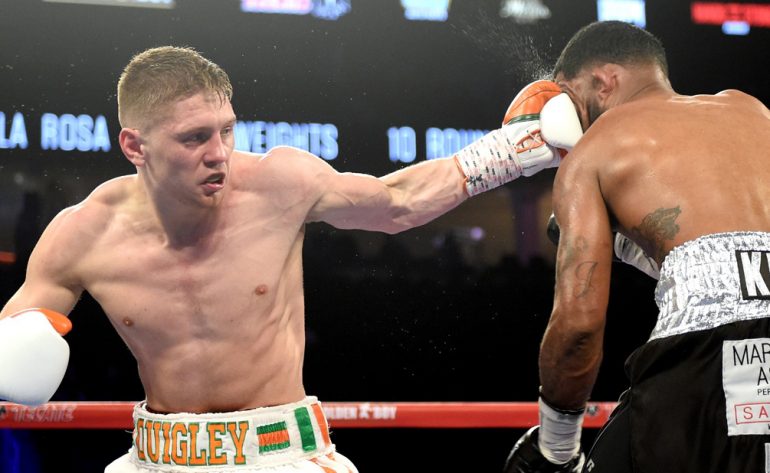 Jason Quigley (L) lands hook to James De La Rosa en route to a 10-round decision on the Canelo-Khan undercard in May 2016. Photo by Naoki Fukuda
31
Mar
by Francisco Salazar

Jason Quigley is hoping to pick up where he left off before an injury sidelined him for over a year.

The unbeaten middleweight returns to action Saturday night against Daniel Rosario at the Marina Bay SportsPlex in Quincy, Massachusetts. The eight-round bout will precede the main event between junior middleweight Mark DeLuca and late-substitute Ramses Agaton.

Quigley (13-0, 10 knockouts) has not fought since March of last year, when he won a 10-round unanimous decision over Glen Tapia. During that fight, Quigley tore a ligament in his right hand and was sidelined for several weeks.

Quigley, who is originally from Laghy, Ireland, had a breakthrough year in 2016, scoring impressive victories over James De La Rosa and Jorge Melendez.

“I’m excited to be back in the ring and especially to be back in Boston,” said Quigley, who is promoted by Golden Boy Promotions. “Daniel Rosario is a great fighter and is going to give it everything on fight night, but it doesn’t matter what he brings. No man is stopping me now.”

Several young fighters from Ireland, including unbeaten prospect Michael Conlan, have garnered lots of attention in recent months. Quigley believes bigger fights await him and his countrymen at a time when the sport is on a serious upswing.

“Irish boxing is booming right now,” said the 26-year-old boxer-puncher. “It’s great because our fans and the people of the country deserve something to get excited about. We’re giving them big fights and bigger fights are to come. It’s an honor to represent my country every time I step in that ring.”

Rosario, who has lost his last two fights, is still a dangerous puncher. Quigley will be wary because all three of his opponent’s losses have come via split or majority decision. A victory could see the Irishman back out in the summer, and he is eyeing something very significant towards the end of 2018.

“At the end of this year, or early next year, I plan to have myself right up there (in the rankings),” said Quigley. “I’m ready for my shot at the title. I’m here to become a world champion.

“2018 is going to be a massive year for me and this fight is the first steppingstone to a massive year. I’m 110 percent ready for this fight. I’m ready to go in and put on a clinical performance. Now is my time.”