Anthony Joshua: If Joseph Parker wants a war, that’s what he’ll get 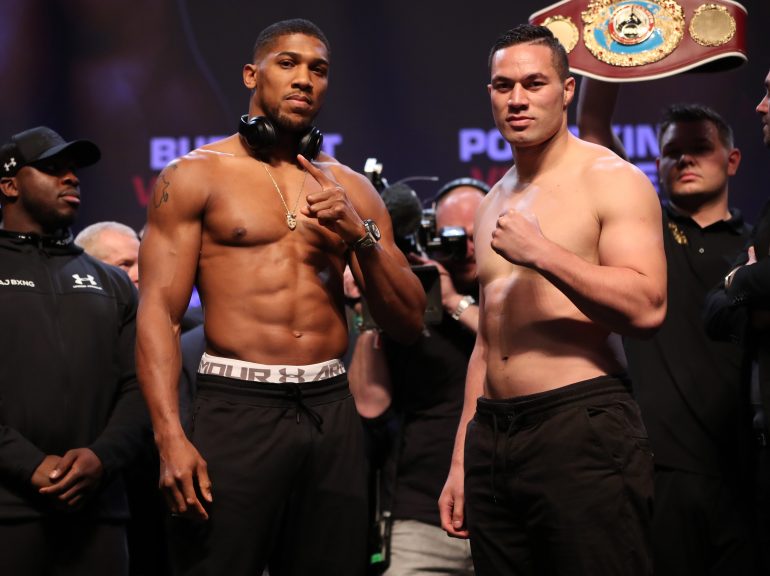 Now it’s up to two other big men to deliver and kind fashion.

Anthony Joshua and Joseph Parker will meet Saturday in Cardiff, Wales (2 p.m. ET, Showtime) in a heavyweight title unification fight and both boxers are promising a back-and-forth brawl.

Neither man has ever tasted defeat, and no opponent has ever lasted the distance with Joshua, THE RING’s No. 1 heavyweight and a prohibitive favorite.

“I’m not worried about a decision,” Parker said Friday after weighing 236 1/2 pounds. “We’ve done everything we can in training to prepare. The biggest thing for me is the challenge of fighting someone like Joshua. If it goes into a dark place, how long will I stay there for? How fast can I come back?

Parker (24-0, 18 knockouts) hasn’t been involved in any memorable fights since he won the the heavyweight title against Andy Ruiz in 2016, which was a solid bout.

The 26-year-old since defended his titles in two dreary affairs, bouts against Razvan Cojanu and then Hughie Fury in September. Each of those three fights lasted 12 rounds, and the Fury fight in particular was downright boring, though it was mostly due to the Brit’s propensity for staying on the outside.

Joshua, of course, is no stranger to action fights. His meeting with Wladimir Klitschko last year was a bona fide heavyweight classic and netted honors as THE RING’s fight of the year. The 28-year-old’s fight with Dillian Whyte in 2015 was also a memorable bout, so if it’s a grueling fight Parker fancies, Joshua isn’t going to back down.

“It’s good news that he wants a war. In boxing, all you need is a good chin and a right hand but I’ve been working on finesse, technique, counter punching,” said Joshua (20-0, 20 KOs). “I hope Joseph Parker falls into my booby traps because I’m going to set him up with some power shots as well.

“Yeah, I’ll be up for a war. I’ll hopefully be up for some blood, sweat, and cheers from my corner.”