Is Canelo-GGG 2 really in jeopardy? Nah, boxing is a business and the show must go on 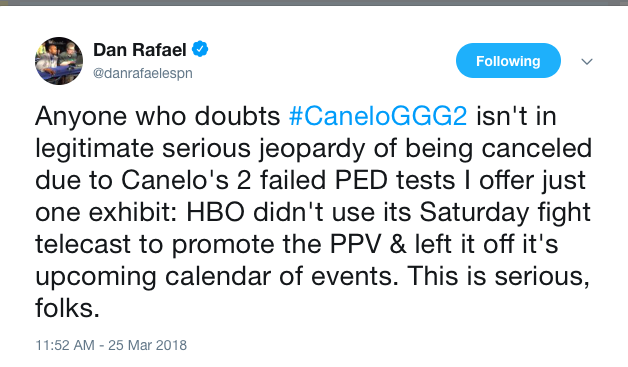 No, I do not believe that the Nevada Athletic Commission (NAC) will pull the plug on Canelo Alvarez’ participation in the May 5 rematch against Gennady Golovkin after that April 10 hearing, the one to help them delve into the Mexican middleweights’ explanation for the chemical being in his system twice, from samples taken days apart.

Why? Because I think in this nation, in this business in most all business, the show must go on. It’s money that matters most, and the continuation of business as usual most often takes precedence over stands on principle which are made to, ostensibly, make an endeavor or competition more “fair.”

It is wise of course to look at the history, to see if there is precedent, to help us determine what the commission will rule. Well, the history isn’t a lengthy one, being that most positives occur after the fact, samples show up dirty after competition. That’s because the more extensive testing, a protocol done for a solid spell leading in to a fight, is portrayed as cost prohibitive, and, indeed, in a capitalistic system, people look for every area they can to trim costs and make more pure profit.

One quite high profile occurrence of the plug being pulled occurred in 2012. Lamont Peterson was supposed to fight Amir Khan in Las Vegas, but a Peterson sample came pack positive, for synthetic testosterone, and after much debate among all entities, the fight set for May 19, 2012, was cancelled. The cancellation was announced on May 10, nine days before the bout. The card was scrapped and all the fights on the card were either cancelled or moved to other dates. The world kept turning and the people at Mandalay Bay, where the card was to be held, survived.

But this event, this is a bigger deal. That fight was anticipated, sure, but this one, the sequel to the face-off from last year, which came after a couple years of begging, pleading, lobbying and negotiating, this one will maybe be the biggest boxing event of the year, unless Floyd Mayweather un-retires in 2018. To pull the plug on this event, or to remove Canelo from the card, because that is probably what would happen, and try to salvage the night, that would be a big damn deal. And when I first learned of the April 10 hearing, my response was not in line with Dan’s. But guess what? Dan is more tied in to the players involved, has more off the record and on background chats with the parties involved, I’m betting, and may very well be situated to have an inside track on what will result from this April 10 hearing.

But to be sure, I was and am still quite surprised at the industry leaders’ public stance, that the GGG v Canelo sequel is in “legitimate serious jeopardy of being cancelled.” My inclination is the same as I dare say a majority of the public’s, that there is a track record in show business—and yes, boxing is show business, of a sort, it is sports entertainment, an event being packaged to sell to the masses for their entertainment—for having a “the show must go mentality.”

There is also a track record in damn near the whole sports world of relative toothlessness in responding to PED usage. Sure, there is the occasional crackdown, a hammer being dropped. But typically in the boxing sphere and beyond, even guys that have more than one strike against them can continue to soldier on. The sanctioning bodies and the commissions sort of make it up as they go along, because there isn’t much in the way of set guidelines on how to handle these situations. Like Luis Ortiz’ case; you saw that he did get popped, again, after a 2014 positive, and he was punished, for a 2017 recurrence…but he was able to, after being suspended, get his turn at bat, and fight Deontay Wilder. But, yes, the Cuban heavyweight was pulled from a November tango against Wilder, in a title challenge for Wilders’ WBC belt. That fight was to take place in New York, not Las Vegas, and indeed, the show did go on, with Bermane Stiverne subbing in for Ortiz. We learned on October 5th that Stiverne would sub in for Ortiz on November 4, for the record. A crowd of 10,924 saw Wilder steamroll a flabby Stiverne. Compare that number to the 14,069 announced for the re-set Wilder v Ortiz fight, which unspooled March 3, and enjoyed a higher profile than Wilder-Stiverne, because Ortiz was seen as a division bogeyman. The show must go on, that is the main takeaway…but will a leading man get subbed in? Or will the full cast stay together, from the smash hit first one to the sequel?

I asked one industry bigwig their thoughts on whether or not Nevada will restrict Canelo from fighting May 5.

“It’s unlikely, but possible,” the big player told me, positing that in his circles, people think Canelo was. “The Clen beef problem is a Mexico City thing, not Guadalajara. It’s virtually never in beef consumed by wealthy Mexicans, forget about a red haired privileged multimillionaire. If he’s going to be made to show how, when, where, could be a big problem. Also, have to eat A LOT of tainted beef to have it show up at all. GGG is right. Other athletes pay the price in other sports. Know where your meat came from. Period. Order Omaha steaks, U.S. meat, organic Mexican beef…Zero tolerance.” That individual doesn’t have a dog in the hunt May 5, by the way.

Those that do have been pretty tight lipped. Yes, GGG has been active in his thoughts on the matter. But organizers are not so inclined to muddy the waters further with splashy statements. They seem to be in a “let’s wait and see” mode.

But of course all are trying behind the scenes to get a handle on how the commissioners in Nevada are likely to rule.

One thing we know, Nevada is not compelling Canelo to appear in front of the committee. That I find curious. Would it not make most sense to hear directly from the man? Will a lawyer do his talking for him? Or will he decide his best play is to show up, face that music?

My three cents: As of today, I’m inclined to think we see Canelo fighting GGG on May 5. GGG wants it, and Canelo does too. Most fans polled do too. I guess we’d have to give huge credit to the commission if they decided after that hearing that they want to show the world they take a hard line against using PEDs and won’t let commerce overshadow a desire to see clean competition play out. Talk to me, readers; will Canelo fight May 5?