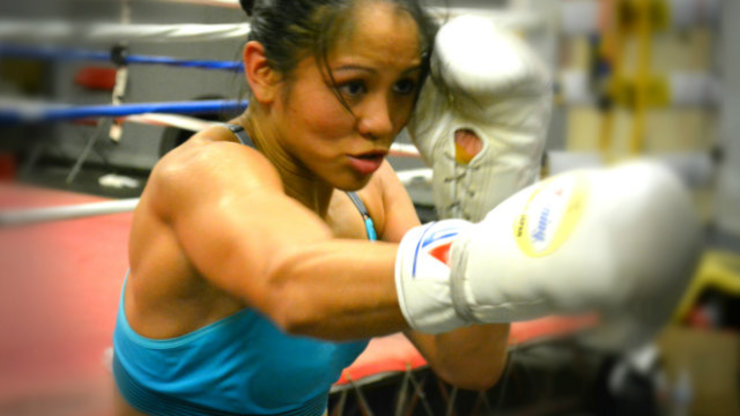 Just a month before she was set to return to the boxing ring, Ana Julaton has announced her retirement after 11 years as a pro, saying it was “time for me to move on from fighting.”

Julaton broke the news through her Instagram account on Wednesday night, thanking her promoter/adviser Allan Tremblay, plus Bellator president Scott Coker, in whose mixed martial arts promotion she most recently fought. She also thanked Heather Hardy, her final opponent in MMA, to whom she lost a decision at Bellator 194 on February 16 and was expected to face again on April 21, in a boxing match, and Hardy’s promoter Lou DiBella.

“Moving forward to my next journey, I am officially retiring from professional fighting. Thank you everyone. I’m truly humbled and deeply honored for you all allowing me into your lives and hearts. I’m forever grateful,” said the 37-year-old Julaton, who retires with a 15-4-2 (2 knockouts) record in boxing, and a 2-4 MMA record.

Julaton, a Filipina-American from California’s Bay Area, first trained in martial arts as a child, winning taekwondo championships before moving to boxing, where she won the San Francisco Golden Gloves and California State PAL Championships in 2006, earning a No. 2 ranking in the country. She had dreamed of competing at the 2008 Olympics, and pushed for its inclusion in Beijing, but the sport didn’t debut until four years later in London.

Earlier today, I spoke to my long time promoter/advisor Mr. Allan Tremblay who has been a father, a friend and mentor throughout my entire professional sports journey. I told him it was time for me to move on from fighting. After that very deep and emotional conversation, I spoke to Mr. Scott Coker next and thanked him for allowing me to be a part of @BellatorMMA. I'd like to thank Mr. @LouDibella and his Team @DibellaEnt for all their efforts to putting together a boxing match for me. I'd like to thank @HeatherTheHeat for sharing the cage with me and I wish her all the very best in her combat sports career both boxing and MMA. As a competitor inside the ring and cage, I'm confident in leaving combat sports fully knowing there are so many wonderful, passionate and hardworking women continuing to carry the torch as a guiding light for the bright future of our arena. For all who have been positive and continue to create a stage for all my sisters in the arts, all the organizations I have fought for…Thank you. I consider myself fortunate to have had my Orion Sports Management family giving me the global stage and opportunities I received to compete at the highest level of Boxing and MMA. So many memories flash through my mind as I write this. Moving forward to my next journey, I am officially retiring from professional fighting. Thank you everyone. I'm truly humbled and deeply honored for you all allowing me into your lives and hearts. I'm forever grateful. Sincerely, Ana "You can't connect the dots looking forward; you can only connect them looking backwards. So you have to trust that the dots will somehow connect in your future. You have to trust in something – your gut, destiny, life, karma, whatever. This approach has never let me down, and it has made all the difference in my life." – Steve Jobs

Julaton turned pro in 2007 and won her first big fight against women’s pioneer Kelsey Jeffries in 2009. She then became the first ever WBO female junior featherweight titleholder in her eighth bout with a decision win over Donna Biggers, in San Jose, and, in her biggest fight, traveled to Argentina to face then-unbeaten Yesica Marcos in 2012, dropping her with a picturesque left hook early in the fight before losing on points.

She fought eight of her last nine boxing fights in Mexico, where the women’s sport had greater development and TV exposure.

Julaton was never defeated inside the distance in boxing or in MMA and displayed her resilience most profoundly in her 2014 MMA debut against Aya Saber at ONE FC 23 in Manila, surviving for nearly a minute in a guillotine choke before extricating herself and finishing her opponent in a rain of ground-and-pound strikes the following round.

Though she never fought in the Philippines as a boxer, she gained a popular following in her ancestral homeland, with her fights being featured on the GMA television network. She had also been a fixture at Manny Pacquiao’s fights in the U.S. and had trained alongside him at the Wild Card Boxing Club in Los Angeles, from 2007-2011.

Julaton was one of just two female boxers Freddie Roach had trained from pro debut to a world title, alongside Lucia Rijker, Julaton’s boxing/MMA trainer Angelo Reyes said. Julaton had also been the one who gave Rijker’s induction speech at the Nevada Boxing Hall of Fame in 2017. Julaton also trained with Roger Mayweather for her 2013 fight against Perla Hernandez, whom she beat by majority decision.

“I’m so sorry to hear that such a great champion and human being leaves the sport,” said Rijker of Julaton’s retirement. “However I trust that whatever she will do in this world after combat sport will be of great value.”

Her final boxing match took place on March 25 in 2017, against Maria Nunez, which Julaton won by decision but is incorrectly listed as a draw on BoxRec, Reyes said.

Among those who paid tribute to her was Hardy, who called Julaton one of her “heroes.”

“One of the unrecognized in an era where women’s boxing, and all its epic fights, went under the radar, unnoticed, and unappreciated. A time when women weren’t allowed to box in the Olympics, and were fighting for a single spot on the undercard of a fight card, once a year. A time when women were flying around the country and doing 10-round title fights for less than $1000. A time when it was hard to walk into a gym and get a coach to take a female fighter seriously, knowing that the rest of the world didn’t. A time less than 10 years ago,” said Hardy.

“Thank you @anajulaton for lighting the way. For giving me a cause to fight for.”

Reyes, who trained her since her days as a white belt in karate, called her a “a trailblazer, leader and legend in our sport.”

“It brings me joy to know that Ana always understood the importance of staying true to herself and has represented both sports with class, grace and dignity, through the ups and downs of this very male-dominated industry,” added Reyes.

Julaton takes comfort in leaving the sport a better place than when she first started.

“As a competitor inside the ring and cage, I’m confident in leaving combat sports fully knowing there are so many wonderful, passionate and hard-working women continuing to carry the torch as a guiding light for the bright future of our arena,” said Julaton.

“For all who have been positive and continue to create a stage for all my sisters in the arts, all the organizations I have fought for…Thank you.”