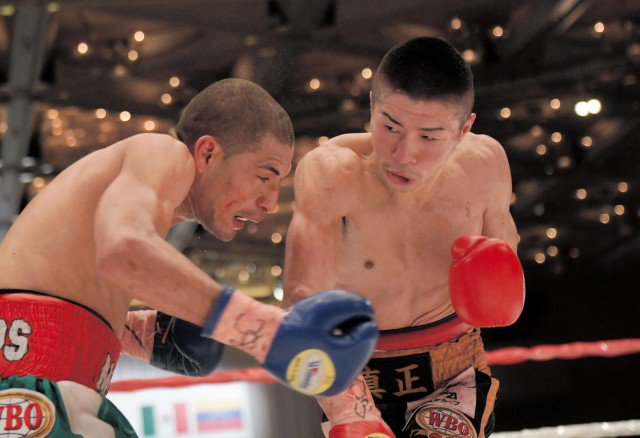 Ryuya Yamanaka successfully defended his WBO strawweight title with an eighth-round stoppage over Moises Calleros at the Portopia Hotel in Kobe, Japan, on Sunday.

Yamanaka, who is ranked No. 6 by THE RING at 105 pounds, was making the first defense of the title he won from Tatsuya Fukuhara by 12-round unanimous decision on Aug. 27.

After an even first couple of rounds, Yamanaka (16-2, 5 knockouts) began asserting himself, outboxing and scoring at will against his opponent who hails from Monterrey, Nuevo Leon, Mexico.

Calleros (28-8, 16 KOs), who lost by split decision to Fukuhara on Feb. 26 of last year, could never get any offense going and, as the rounds progressed, boxed more and more defensively.

In the middle rounds, Yamanaka thrilled the hometown fans by scoring repeatedly with overhand right hands or uppercuts. His best round, however, was the eighth, where he battered the challenger around the ring. Calleros did not answer the bell to begin the ninth.

In the co-feature, junior flyweight Carlos Canizales of Venezuela, who is ranked No. 3 by THE RING at 108 pounds, defeated Reiya Konishi by 12-round unanimous decision.