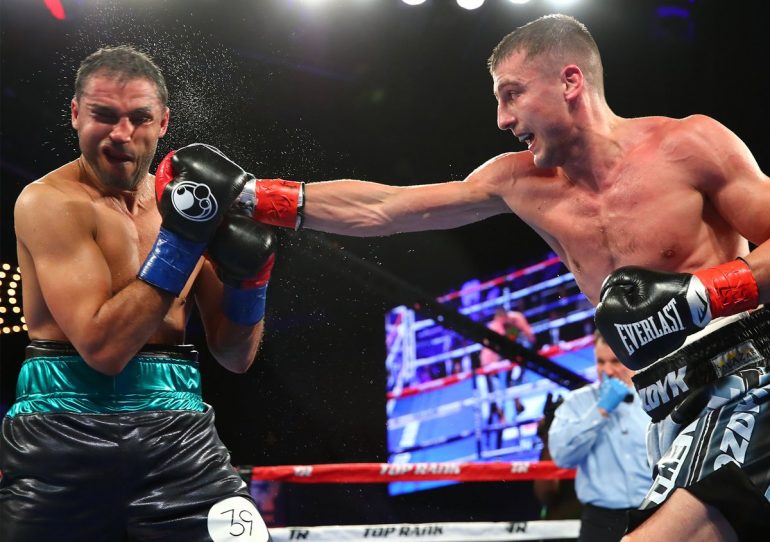 Mehdi Amar didn’t look over his head in Round 1 against Oleksandr Gvozdyk, but watchers had to know that Oleksandr’s nickname is “The Nail,” and had to wonder when a straight shot, hammered home, would spell the end for the Frenchman.

But as the rounds  dragged on at the Madison Square Garden Theater, and it became apparent that Amar was OK with the power reservoir of the Ukrainian.

So the rounds piled up and the action was constant, but the bout never achieved liftoff. The 12th came, and we’d seen all the rounds look pretty damn similar. Would Gvozdyk seek to give the masses a climax? Or, wait a second, would Amar land a crackerjack left hook and bring his peeps to their feet, their hope morphing into optimistic glee? No. The round played out with both men working hard in a tight frame.

The victor now owns the interim WBC belt, for the record. He said after that Amar was more “evasive” than he though he’d be.

Coming in, the expectation was that Gvozdyk would go to 15-0, with 13 KOs. He’d get rounds in, he’d stay sharp and keep the rust at bay. Well, he did indeed get rounds, even more than most thought he would. And no, to be frank, he didn’t raise his profile into that “A” tier of 175-pounders. But, to be sure, he is real solid, and can win crowns and have longevity. But to get to a higher earning tier, he will maybe want to use that fourth gear, and seek KOs a tad more.

In Round 1, Nail showed a height advantage and his volume was better than the man who came in 34-5-2, but against the anti creme de la creme. “Tout suite,” we heard as a suggestion form Amar rooters in press row.

In the second, Nail closed the distance. He ripped hooks, doubled up, got sweeter angles. Irish rooters started a chant, maybe adopting Olek for a few minutes. Amar threw a counter left hook that landed, but didn’t impress the 14-0 boxer.

In the third, we saw Gvozdyk crack the jab, use it to blunt Amar jumping in, using it to set the table for power combos. The combos were not all smokin’ — some were there to soften up the Frenchman. French instruction (my college courses didn’t pay dividends to tell me what was said) was offered to the underdog. His jab was often short, as Gvozdyk slid backward to avoid launches. The Frenchman’s feet were slower, would he soon be found immobile and would one of those combos spell his doom?

In the fourth, left hooks piled up on Amar. Head shots, then to the body. Right hooks, then a setup jab, and a straight right. The Ukrainian was in total control.

In the fifth, Amar was hanging tough. To the sixth, would Gvozdyk show us another gear? Amar even scored with a right late and this fight was not tight, but not a runaway. Amar went to his corner after the seventh and breathed real deep. Would his stamina hold?

In Round 8, Amar didn’t mind the distance closing. Was The Nail’s power waning? The left hook to the body, it looked solid for The Nail. Amar would slip, jab, put up a guard, roll right; he was fighting a smart and solid fight. To Round 9, more solid work, unspectacular but commendable for Gvozdyk. He touched Amar with slowed down combos, saving his sharper stuff for later, maybe. In the tenth, more solid work from Gvozdyk. There was grumbling in press row and on Twitter that people wanted MORE from the WBC No. 2. I had to ask what round it was, 10 or 11, and was told 11 … Amar had for many rounds now disrespected the power and was unafraid to hang tight in against the Ukrainian. Would Gvozdyk give the punters something to hoot about, close the show with a session of flurrying? Nope. The final bell was heard, and the punters would have to wait to explode their lungs.

Manager Egis Klimas sat next to his ultra A-side charge, Vasyl Lomachenko, and watched. He said that after a win, Gvozdyk would be in against the winner of the Adonis Stevenson versus Badou Jack fight. Would you favor Gvozdyk against either?