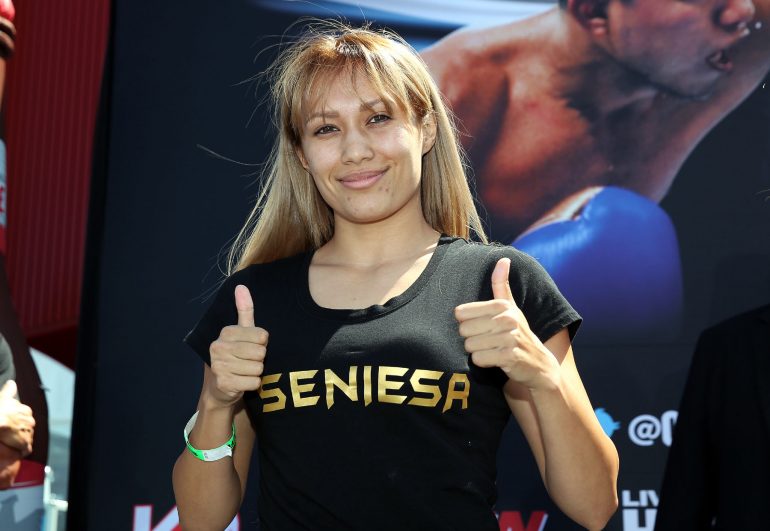 Seniesa Estrada makes it look easy with each passing fight.

The junior flyweight remained unbeaten Friday night, dominating every round during her eight round decision victory over Sonia Osorio at the Belasco Theatre in Los Angeles.

Estrada landed the more telling and effective punches throughout the fight. Osorio (10-6-1, 1 KO), who hails from Mexico City, attempted to mount an offense, but Estrada would either counter with either counter right crosses or left hooks to the head.

The 25-year-old Estrada could have pressed to score at leas a knockdown, but was content to outbox Osorio during the second half of the fight.

All three judges scored the bout 80-72 in favor of Estrada, who improves to 12-0, 2 KOs. Osorio has not lost four of her last five bouts.

“It’s an honor to be the first woman to headline a Golden Boy Promotions event,” said Estrada, who resides in nearby East Los Angeles. “I hope this is the first of better and even bigger events. I had a bit of ring rust because I hadn’t fought since September, so I look forward to getting back in the gym and coming back soon.”

In the co-feature bout, lightweight Oscar Duarte knocked out Jorge Rodriguez in the fifth round.

Duarte (13-0-1, 9 KOs) dropped Rodriguez midway through the fourth round with a right cross to the head. Rodriguez was able to beat the count, but the inevitable was near.

In round five, Duarte landed a left hook to the body of Rodriguez, dropping him to one knee. Referee Wayne Hedgpeth counted Rodriguez out at 1:53.

“We knew we had a tough opponent,” said Duarte, who resides in Parral, Chihuahua, Mexico. “We had to work off the jab to get inside. Once we accomplished that, I was able to punish and finish him with shots to the body. “Coach Joel and Antonio (Diaz) guided me to victory the entire way. I know I have a long road ahead of me, but I’m improving each fight and getting closer to a world title opportunity.”

“Seeing all these prospects go the distance against Jose Martinez really made me want to make a statement,” said Gonzalez. “I wanted to show that I’m on a different level. I wanted to establish myself in the division.”

Junior welterweights Blair Cobbs (7-0-1, 5 KOs) and Mario Esparza (4-0-2, 1 KO) fought to a four round technical draw when an accidental clash of heads over a cut over Esparza.

Tonight’s clash was the first of six planned Golden Boy Promotions card to be held at the Belasco Theatre.