Donnie Nietes says he’s moving up to 115, but promoter says no decision yet 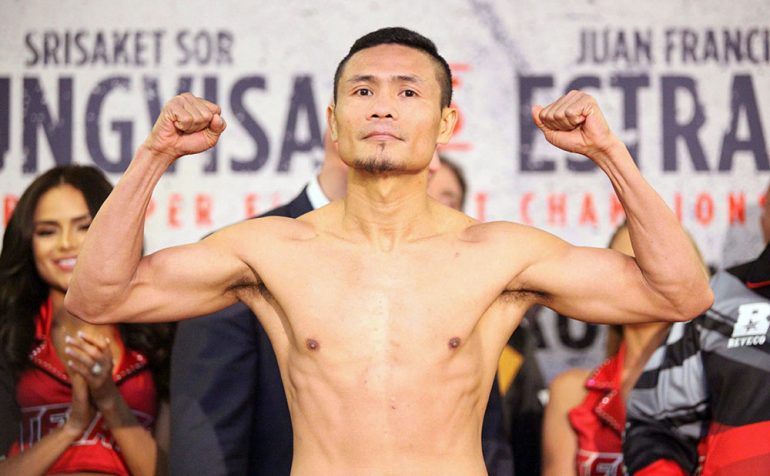 Will Donnie Nietes stay at 112 pounds, or will he move up to 115 pounds to get in on the “superfly” fun?

It’s a question that Nietes’ team has been pondering since his breakout performance in the U.S. last month, when he knocked out mandatory challenger Juan Carlos Reveco in seven rounds in his HBO debut.

Nietes told reporters at a press conference in the Philippines that he has already made up his mind to move up in weight, saying in a story on Rappler.com: “I am decided already. There are no doubts, I want to move up to 115.”

Promoter Michael Aldeguer of ALA Promotions said a decision on which division the 35 year old from Negros Occidental in the Philippines will be made as a team, however.

“He wants to (move up) but we have not decided as a team yet. We have to talk to Nietes’ conditioning coach (Nick Curson) to see what’s for Nietes: to stay at 112 or move up to 115,” Aldeguer told THE RING.

One recent observer who has appreciated how Nietes looked in his last fight was Freddie Roach. Nietes finished up camp at Roach’s Wild Card Boxing Club for the Reveco fight, and Roach was in attendance at the SuperFly 2 card at the StubHub Center and liked what he saw.

“He’s a great puncher. I love little guys that can punch because that’s what most people say, that little guys can’t punch,” said Roach.

One of the fights that could lure Nietes to 115 is against Roman “Chocolatito” Gonzalez, the former pound-for-pound champ from Nicaragua. Nietes, who had held the WBO’s title at 105 and 108 pounds, could be given consideration for a shot at the WBO 115-pound belt (that Naoya Inoue is vacating as he moves to bantamweight) against Gonzalez.

“Chocolatito, he called me, and I hope I see him soon,” said Roach, hinting that he may train Gonzalez for those fights.

The most attractive fight for Nietes should he stay at 112 pounds would be against WBC flyweight titleholder Daigo Higa, the undefeated fighter from Japan who is rated no. 2 by THE RING in the division, one spot below Nietes. A fight between the two would establish a new lineage with the vacant RING title.

Roach says he spent two days observing Higa at the Wild Card, saying he’s “real strong,” but figures Nietes would be too much in the end.