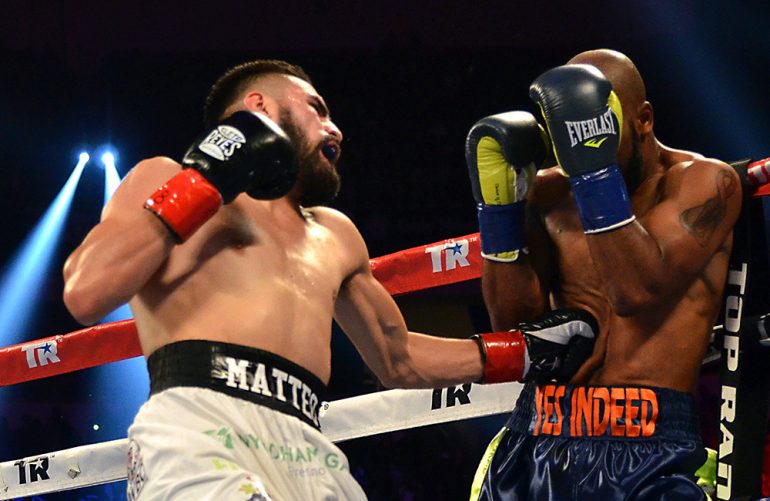 Jose Ramirez (left) chops into Mike Reed's midsection on his way to a second-round stoppage in November 2017. (Photo by German Villasenor)
15
Mar
by Ryan Songalia

If the chants coming from Amir Imam’s camp as they walked past the ring bothered Jose Ramirez as he shadowboxed, he didn’t let on at all.

The 25-year-old from Avenal, California, is locked in for what should be the first serious test of his young career, when he faces the once-beaten Imam for the vacant WBC junior welterweight title, this Saturday, March 17, at The Theater at Madison Square Garden, in New York City. (ESPN, 8 p.m. ET/5 p.m. PT)

“Amir Imam is a very fundamental, technical fighter and I know he’s ready,” said Ramirez (21-0, 16 knockouts). “He had a step back in his career right before fighting for the world title and his opportunity came again. It didn’t take long for him to be back in the number one rating and I expect him to bring the best so I can showcase my talent to my highest potential.”

If he’s yet to show his highest potential inside the ring, he’s already hinted at it outside of it.

Ramirez, who was raised by a family of migrant farm workers, has not forgotten where he comes from. He’s used his fame to champion the farming community’s fight for water rights, in particular with the proposed Temperance Flat Dam, which is being opposed by some over environmental concerns but would provide farmers with water for their crops.

“Having that reservoir, we’re going to be able to source the water properly and manufacture the water all over California and just move it around properly, the communities and the farms. It’s giving us a better future in California because agriculture is very important,” said Ramirez, who has lobbied for this cause in the state’s capital of Sacramento.

“What makes it difficult is that politics, the people with power, they want to know who’s gonna take control of that water because it’s all about power. In California, you best believe that water is worth like oil because the supply is so low and the demand is so high.”

He’s also helping the children of migrant farm workers in his town by setting up a scholarship fund to Fresno State University, where he had attended until he put his education on hold to prepare for the Olympics. When he turned professional immediately after, he befriended the school’s president Joseph Castro, who helped him set up the fund through the school’s alumni association. Castro gave the fund its first donation and, in less than two years, the fund has raised approximately $58,000 from his purses and other donations.

“Avenal’s a very small community, so I know that giving a $1,000, $2,000 scholarship, it takes them a long way,” says Ramirez, who expects to give out the first scholarship by the fall.

All of this has served to make Ramirez a significant attraction in Central California, where he’s sold out the venue 10 straight times when he fought in the region, including 14,800 attendance for his second round knockout win over Mike Reed in Fresno, last November, according to his manager Rick Mirigian. He adds that about 200 people will be flying in for the fight against Imam, which will be televised live on ESPN and co-promoted by Ramirez’s promoter Top Rank and Imam’s promoter Don King Productions.

Imam, 27, also has a lot to fight for. The Albany, New York, resident has won three straight since his lone career defeat, an eighth round stoppage to Adrian Granados in 2015. He had a much smaller crowd around his ring at the other side of Mendez Boxing Gym than Ramirez and finds motivation in being overlooked.

“It gave me some time to think and mature as a boxer…and as a man, period,” said Imam of the Granados fight.

“It taught me to stay strong, even when you come down, because I was winning all the way up until I lost. You catch a loss, you kinda be like, ‘Man, damn,’ but my team kept me strong and we’re going back at it now.

Trainer Freddie Roach says they had worked on a “really great game plan,” and thanked his often-rival Robert Garcia for sending “two of his best guys” to spar with Ramirez four times a week at the Wild Card Boxing Club in Los Angeles. Roach is making it no secret that part of their plan is to not give Imam a moment to think.

“He will get hard, steady pressure on him and if he holds up, he holds up,” said Roach. “That fight (against Granados), (Imam) folded; hopefully he learned something. I do feel we’ll break him down and we will stop him in the late rounds.”

Ramirez believes that becoming a champion would enable him to amplify his message and further inspire those in his community. His promoter Bob Arum has said that Ramirez, should he win, could become a candidate to face Manny Pacquiao, who says he’s adamant about fighting this June in Malaysia.

Questions remain about how that would work, given that Ramirez trains with Roach, and so has Pacquiao, from 2001 up until at least his most recent fight, last July, in Australia. There’s been chatter about whether Pacquiao would continue to work with Roach for future fights and Roach had said recently that his attempts to contact him have been ignored.

Ramirez had sparred with Pacquiao in Manila when Pacquiao prepared to fight Jessie Vargas in 2016, and maintains a great deal of respect for the eight-division champion.

“Right now I’m focused on this fight coming up,” he said, before adding, “It’d be a great opportunity to fight someone like Manny Pacquiao.”

None of that matters until Ramirez handles the business in front of him this Saturday, Roach asserts.