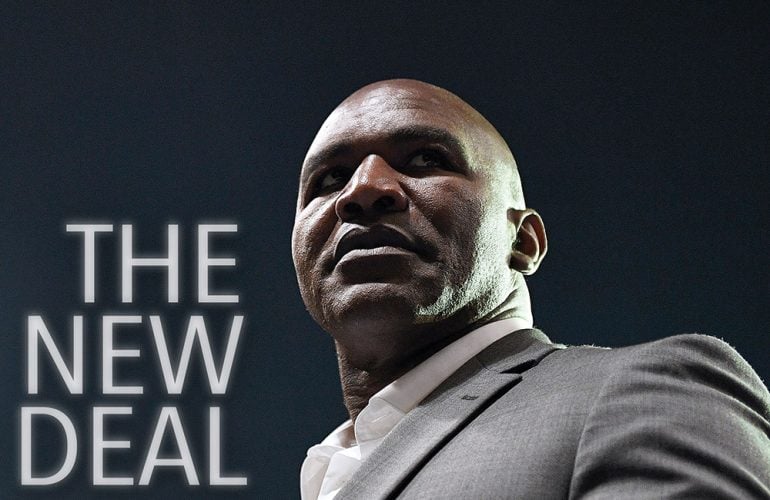 In the long history of boxing, only a handful of fighters have earned the right to be called a legendary heavyweight champion. Evander Holyfield is one of them.

No athlete pushes himself as hard as a fighter who’s getting beaten up and is still trying to win. Time and again, Holyfield did just that. And not only did he keep trying to win, he won.

If every fighter was like Evander, boxing would be the world’s most popular sport.

Fight nights are different now for Holyfield. He’s a promoter.

In May 2017, Evander announced the formation of Real Deal Sports & Entertainment. Real Deal Boxing (a corporate subsidiary) is a promotional entity. Holyfield (who’s contributing his name and sweat equity to the venture) and Sal Musumeci are equal partners. Several investors own a small percentage of the company. COO Eric Bentley, aided by Kevin O’Sullivan, does most of the nuts and bolts work. 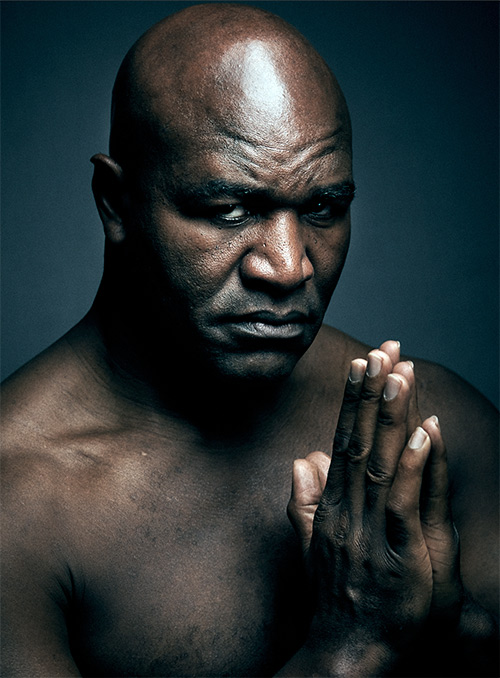 But Evander is more than a figurehead. Longtime Holyfield attorney Jim Thomas says, “Evander is doing much more here than simply lending his name to the company and showing up at fights. He has a good eye for talent and has significant input into which fighters the company signs to promotional contracts. He and Sal talk every day about a variety of company matters.”

Kings Theatre opened in 1929 in an era when movies were at the core of American entertainment and television didn’t exist. In major cities, feature films were often paired with live music in ornate theaters known as movie palaces. Kings Theatre was one five original “Loew’s Wonder Theatres.” In the closing decades of the twentieth century, it fell into disrepair and disuse. But a $95 million renovation completed in 2015 modernized the 3,250-seat facility and restored much of its original splendor.

The theater is more evocative of a spectacular European opera house than a setting for club fights. Think elaborate statuary, marble stairs, an ornate 70-foot-high ceiling, chandeliers, and a burgundy-and-gold color scheme. The chairs are comfortable. The sightlines are good, Clad in a tuxedo that would have done Michael Buffer proud, fight-night ring announcer David Diamante fit nicely with the elegant surroundings.

But for the fighters, all that mattered was what happened on a small square of illuminated canvas.

Dressed in a blue suit and white dress shirt open at the collar, Holyfield arrived at Kings Theatre at 6:30 PM. Soon after, he went to the dressing rooms to visit each fighter. There were handshakes and words of encouragement.

“When I started boxing,” Evander counseled, “I was told I could be something I wanted to be . . . The best thing about being a fighter is that it’s all on you. You can control your own situation.. . . You got to fight every fight like it’s the biggest fight of your life . . . Courage is trying as hard as you can. One of the reasons I was good was I wanted to win so bad.”

Most fighters live on dreams that never come true. Some of the fighters who listened as Evander spoke are prospects with a future in boxing. Others have no realistic chance of becoming more than an opponent. The hot young prospects know they’re good. The question is how good. After each loss, the opponents tell themselves, “The next one will be different. I can make adjustments.” But the next fight comes and it’s just like the one before.

“They wouldn’t be doing this if they didn’t believe,” Evander said as he left the last dressing room. “I can’t make any of these guys a champion. But I can give them the opportunity to make themselves a champion.”

Real Deal Boxing has a “showcase” series and a “championship” series. This was a showcase card. The promotion was hurt when two big ticket-sellers who’d been scheduled to perform on March 10 were scratched. New York super-middleweight Edgar Berlanga underwent an emergency appendectomy. Then, on Tuesday of fight week, Brooklyn super-bantamweight Khalid Twaiti came down with pneumonia.

That left eight fights. As the evening progressed, one bout flowed into the next with no long intervals in between.

History will note that the first fight ever contested at Kings Theatre was won by a woman when Natalie Gonzalez outpointed Judit Hachbold over six rounds. None of the remaining bouts went the distance.

Joseph Elmore, a former MMA fighter making his boxing debut against local favorite Justin Biggs, got up from a body shot that Arturo Gatti in his prime would have had trouble getting up from. Then, much to Elmore’s dismay, his corner stopped the bout.

Two former Olympians from Uzbekistan – Murodjon Akhmadaliev (bronze) and Shakhram Glyasov (silver) – made their professional debuts with first-round knockouts respectively over David Michel Paz and Nicolas Atillo Valazquez. Valazquez was floored by a hook to the body in the first flurry of the fight and counted out at the 15-second mark.

Holyfield sat in the front row and watched each fight intently. The ring had been erected on the theater stage with VIP seating around it. There was only a one-foot drop from the ring apron to the floor, so Evander was close enough to reach out and touch the combatants. He entered the ring before each bout to greet the fighters and again when the result was announced.

From time to time, he reminisced with those sitting around him.

“My greatest moment in boxing was when I made the United States Olympic team. The last fight at the Olympic trials was over. We were standing in the ring. Then I heard the announcer say, ‘Ladies and gentlemen; representing the United States in the light-heavyweight division, from Atlanta, Georgia . . .”

There were thoughts on his first loss as a pro in an epic battle against Riddick Bowe.

“I sparred with Riddick when I was twenty-two and he was seventeen. He gave me hard work even then. I remember his telling me at the time, ‘A good big man is better than a good little man.’ Then, when we were getting ready to fight for the first time, Riddick told me, ‘You know, I’m not that young kid anymore.’ And he wasn’t. But there was real respect between us. Through all three fights, we respected each other.”

There was humor: “You only get hit if you make a mistake. I guess I made a lot of mistakes because, every fight I fought, I got hit.”

And insight: “A fighter has to love fighting to be great.”

As for the future; Real Deal Boxing plans to promote a dozen fight cards in the twelve month-period that began on March 1. This includes four more cards at Kings Theatre on April 21, June 9, September 8, and December 1.

Meanwhile, on April 27, Real Deal Boxing will inaugurate an eight-man single-elimination welterweight tournament in Louisville under the auspices of the World Boxing Council. The “Jose Sulaiman World Invitational” will unfold over the course of three dates and, with the approval of the Kentucky State Athletic Commission, will feature open scoring, five judges instead of three, a draw-breaker round, and bonus payments for the winner of each fight.

It’s not uncommon for fighters to form their own promotional company. In that regard, Oscar De La Hoya, Roy Jones, Lennox Lewis, and Floyd Mayweather come quickly to mind. But these ventures work best when the fighter in question can leverage his own ring appearances into network television dates. They become problematic when he’s no longer an active fighter. Ray Leonard and Mike Tyson were each part of a promotional company after their days as an active fighter ended. Neither venture lasted long. It’s hard to turn a profit as a boxing promoter in today’s environment.

Real Deal Boxing’s initial press release declared, “The company has an agreement with CBS Sports Net and plans to air its Real Deal Championship Boxing series on the network on a monthly basis.” But the March 10 fight card was streamed live for free by CBS Sports Digital on SportsLive, an over-the-top Internet channel.

“Distribution of content is changing every day,” Jim Thomas says. “That’s the world we live in, and that will be the key here. But Evander is offering more than his name. He’s working hard to build this from the ground up.”

There’s reason for optimism and reason for skepticism. Sort of like when Holyfield fought Mike Tyson.

Thomas puts matters in perspective when he observes, “Evander has a deep emotional attachment to this. At the end of his career as a fighter and after he retired, he was drifting. He was looking for his place. And he feels now as though he has found it. Evander believes in his heart that Real Deal Boxing can become the biggest promotional company in the world. If you shoot that high and get halfway there, you’re doing well.”