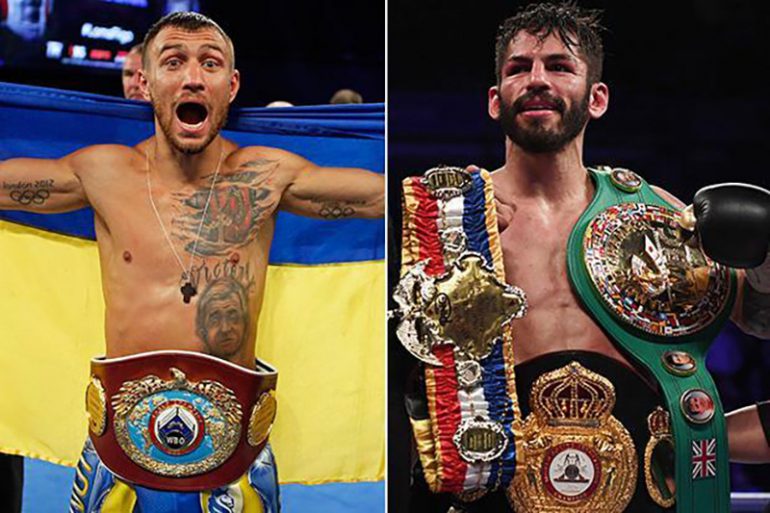 Not to be the “rain on your parade” guy, but anyone who saw this Tweet from the L.A. Times’ chief boxing scribe Lance Pugmaire yesterday… 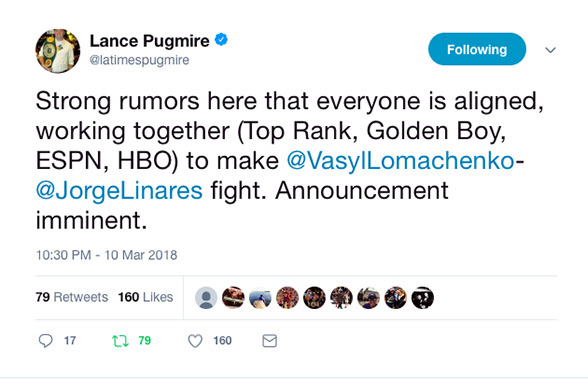 …was maybe getting into a celebratory mode, and I’m here to ask you to walk that euphoria back.

A Vasyl Lomachenko (WBO 13o-pound titleholder; RING/BWAA 2017 Fighter of the Year) v Jorge Linares (RING/WBA 135-pound champ) fight has been desired and discussed and discounted… and now seems to be back in a makeable place.

“Announcement imminent,” insider news that was echoed by RingTV.com’s Mike Coppinger, is quite an upbeat assessment and indicator of where that proposed faceoff stands, but I had to adjust my mood regarding the Loma-Linares fracas after I touched base with Eric Gomez, the Golden Boy Promotions president.

GBP promotes Linares, in concert with Akihiko Honda, the Japanese fixture whose been aligned with the 32-year-old Venezuelan since he turned pro in 2002.

Yes, Gomez continued, GBP is open to a Linares vs Loma fight. Yes, the May 12 date that had been discussed, and a clash at Madison Square Garden, screening on ESPN, is in play. But “imminent,” no, not so…

“His promoter has to reach out to us,” said Gomez. That means Top Rank’s Bob Arum, or Todd DuBoef, would need to talk turkey with Gomez, and get into nitty gritty. That’s because, Gomez said, the proposed meeting would play out on a Top Rank show, on their turf. If the turf was Golden Boy’s, Gomez said, he’d take the lead in the back and forth. But he hasn’t of late heard from Bob or Todd, so he’s not at all on board with characterizing Loma vs Linares as “imminent.”

Regarding that rain, I think you should consider it more like some drizzle, which could disappear and be replaced by blue skies and sunshine-y vibes at any time. But for now, deal with the drizzle.