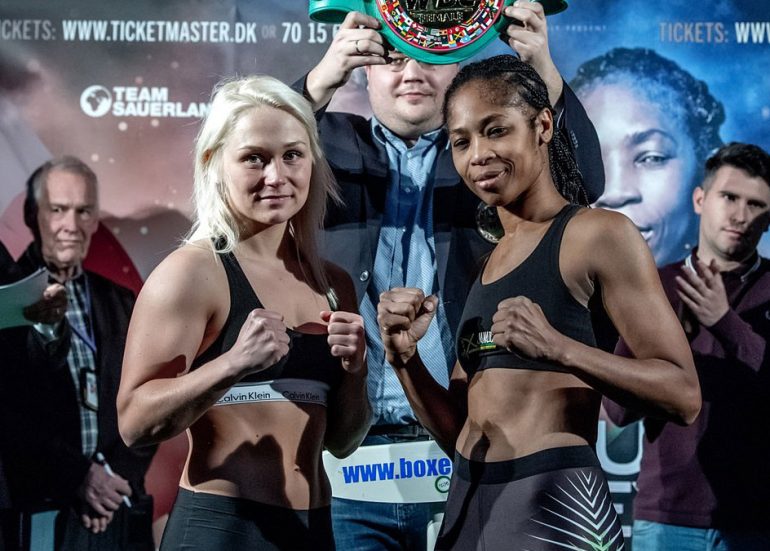 Alicia Ashley (right) and Dina Thorslund weigh in for their March 10 fight in Denmark. (Photo via Twitter)
11
Mar
by Ryan Songalia

The scores were close, with two cards marking it 96-94 while the third had it 97-93 for the hometown fighter, Thorslund, who is 26 years the junior of the 50-year-old Ashley. Thorslund rises to an 11-0 (6 knockouts) record and will likely be the next in line to face titleholder Fatuma Zarika.

The loss drops Ashley to 24-12-1 (4 KOs) over the course of a 19-year pro career, but the Jamaica-born Brooklyn resident says she has no plans of stopping her career.

“I’m of course disappointed in the result of the fight. I started off too slow and started to get into a groove as the fight unfolded. I feel really good about my performance but saddened that I fell short of my goal,” said Ashley, who became the Guinness World Record holder for the oldest female boxing champion after she won the WBC junior featherweight belt for a second time at age 48.

“This fight just made me a little bit hungrier. There is no way anyone watching this fight will say ‘because she’s 50, she lost.’ The fact that I wore her down is a testament to my shape and desire to win. You haven’t seen the last of me yet.”

Ashley had been hoping to set up a rematch with Zarika to avenge a split-decision loss to the Namibian fighter in 2016, which cost her the belt.

The show was promoted by Sauerland Promotion.