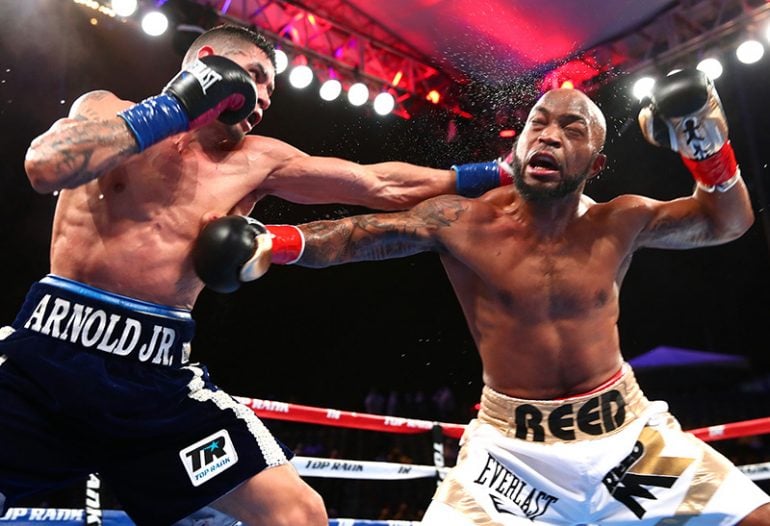 Arnold Barboza Jr. lands left to the jaw of Mike Reed during their 10-round bout. Photo by Mikey Williams-TOP RANK
10
Mar
by Mike Coppinger

The fight was the final undercard bout before the Oscar Valdez-Scott Quigg ESPN telecast started at StubHub Center.

“I thought that I could look much better,” said Barboza, a Los Angeles resident. “It wasn’t my best performance, but I’ll take the win.”

Barboza (18-0, 6 knockouts) is now ready for a bigger test after taking care of Reed, who was now lost two consecutive fights.

Reed was knocked out in Round 2 of a 140-pound title eliminator in November by Jose Ramirez.

“Going into the last two rounds, my coach told me it was a close fight and the judges were going to side with him because we’re in his hometown,” said Reed (23-2, 12 KOs). “I thought I let him get off to an early start, kind of broke him down at the end, but that’s how it goes. I left it in the judges’ hands.”

Junior welterweight contender Alex Saucedo survived an early scare against journeyman Abner Lopez, but rallied to stop the Mexican at 1:17 of Round 7.

In his first fight since coming up just short in a title fight vs. Joseph Parker, Andy Ruiz scored a first-round knockout of Devin Vargas.