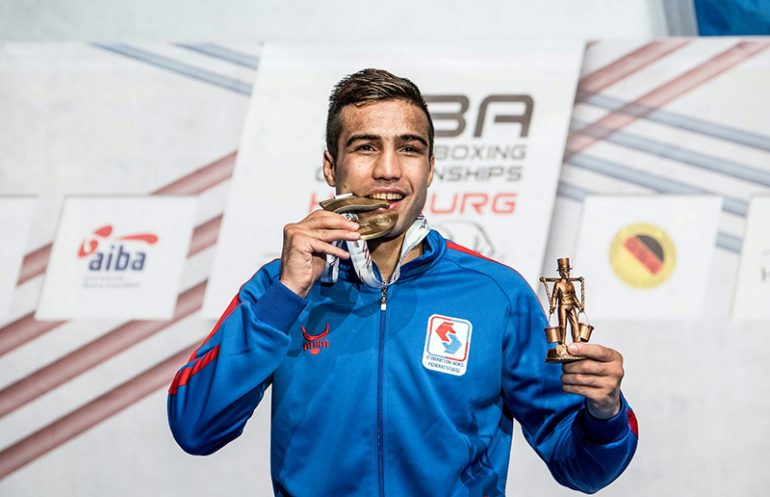 They were in the ring a combined time of 1:23 before the 2016 Olympic medalists from Uzbekistan got the job done in Brooklyn.

Shakhram Giyasov and Murodjon Akhmadaliev finished off their respective opponents early to win their pro debuts Saturday at Kings Theatre.

Giyasov, the welterweight silver medalist in Rio de Janeiro and gold medalist at last year’s AIBA World Championships, knocked down Nicolas Velazquez (10-3, 3 KOs) less than ten seconds into the fight on a body shot. It wasn’t initially called a knockdown, but the fight was waived off at the 15-second mark after the Argentinian refused to get back up from the initial volley.

Akhmadaliev, who earned bantamweight bronze at the same Games, had to fight a bit longer, pounding David Paz (4-5-1) in the corner before he went down for the count on a delayed reaction to a body shot. The official time was 1:08.

2016 Olympic bronze medalist Murodjon Akhmadaliev of Uzbekistan knocks out David Paz in a minute to win his pro debut in Brooklyn #boxing pic.twitter.com/ip5flDhQoL

Both are promoted by Andrey Ryabinsky’s World of Boxing, which also handles Dmitriy Bivol and Alexander Povetkin, and are trained by Joel Diaz in Indio, Calif. They also share a manager in Vadim Kornilov.

The six-round scheduled bouts were part of the Real Deal Sports and Entertainment card headlined by Brooklyn native Julian Sosa (11-0-1, 4 KOs), who stopped overmatched Dominican fighter Wilmer Rodriguez (9-2, 7 KOs) at the 59-second mark of the third round.

Rodriguez, a former bantamweight who has fought just once since a decade-long layoff, brought a flabby body to the junior welterweight fight, and the girth around his midsection made for an inviting target for Sosa’s left hook to the body.

Sosa, a 22-year-old music technology student at the College of Staten Island, finished the fight with a pair of body shots. Rodriguez rose up but didn’t seem interested in continuing.

In the co-featured bout, Josue Vargas (10-1, 6 KOs) of The Bronx, N.Y. dropped Zack Ramsey (8-3, 4 KOs) with a sweeping right hook in the fifth round, and stopped him with an unanswered volley of blows at 2:55 of that round in their eight-round junior welterweight bout.

Vargas, 19, has now won four straight since his lone defeat, a third-round disqualification against Samuel Santana in a wild 2016 bout which saw both men hit the canvas and Vargas DQ’ed for hitting Santana as he turned away from a knockdown.