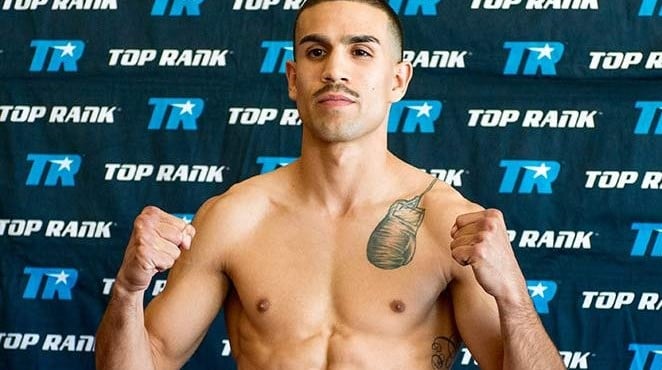 Vences has another opportunity Saturday night, where a victory would catapult him toward contender status.

Vences will face Erick De Leon in a battle of unbeaten junior lightweights at the StubHub Center in Carson, California. The 10-round bout will precede the 12-round main event between WBO featherweight titleholder Oscar Valdez and Scott Quigg.

The 26-year-old Vences (20-0, 12 knockouts) has built an unbeaten record facing and defeating modest opposition. In his last bout on November 11, Vences knocked out Jairo Ochoa in the second round.

The clash between Vences and De Leon (17-0, 10 KOs) is a compelling matchup between two fighters who have been brought up through the matchmaking of Top Rank, often fighting on ‘Solo Boxeo’ broadcasts on UniMas.

This will be the first time both have fought on a major network. The winner will likely receive another high-profile fight later this year or in 2019.

Vences envisioned a fight with De Leon as early as last year.

“I had a feeling Erick and I were going to fight after we appeared on the Aug. 5 (Vasyl) Lomachenko card in Los Angeles,” Vences told RingTV.com over the phone Tuesday. “I saw this happening. I was already preparing to fight him when the fight was officially announced. I was sparring southpaws and I believe I’m 10 steps ahead of him.”

“To the casual boxing fan, this looks like a 50-50 fight. But when you look at the backgrounds of each one of us, who has made the most progress? I’ve developed the most since turning pro. I’m sure Erick and his team (including trainer Robert Garcia) have studied film of my fights, but what they don’t take into account is how much I have evolved as a fighter. I always add something new with each fight or training session. Has he developed as a fighter? That’s the question.”

Vences resides in the San Jose area, about an hour south of San Francisco. Despite the lack of fight cards on a regular basis, Vences has made a name for himself in the Bay Area of California.

“Boxing may have died out over the years, but people know who I am in the area and they follow my career.”

Like many fighters, Vences has utilized boxing as a means to support himself and his family, which mean more to him than any world title belts.

That can be traced back to Vences’ humble roots while growing up in California’s rural areas.

“I’ve always had the mentality to work hard for what you want,” said Vences, who was born in the Northern California farming town of Watsonville. “Nothing will satisfy me more than to provide for my family the same way it was done for me when I was growing up. I don’t box for belts. Instead, I fight for financial stability.”

Vences is grateful for the opportunities that have been put in front of him thus far, including those from Top Rank. Vences was managed by Herb Stone, but Stone passed away last spring.

Vences admitted he fights on with a heavy heart without having Stone in his corner, but he battles on in his memory. Saturday night marks the one-year anniversary Vences fought Angel Hernandez, which was Stone’s final appearance in Vences’ corner before his death.

“I just turned what happened into a positive. A year ago from my fight with Erick and it was the last time Herb’s last fight in my corner. I think it’s more than a coincidence. I made it a point to dedicate each fight to Herb Stone. He took a chance on me when he signed me and I don’t take it for granted. I’m grateful he helped me out.”

Vences anticipates a difficult start to the fight, when De Leon is most dangerous. Vences believes he has too many intangibles to fall short against De Leon.

With the spotlight on the Vences-De Leon fight prior to the fireworks that Valdez-Quigg could be, Vences is eager to make a statement.

“I’ve never prepared mentally and physically the way I have for this fight. I’m on weight and I can’t wait for Saturday. I don’t only envision outboxing Eric, I know I will win on Saturday.”