Ronny Rios: ‘You will see the best Ronny Rios tonight versus Azat Hovhannisyan’ 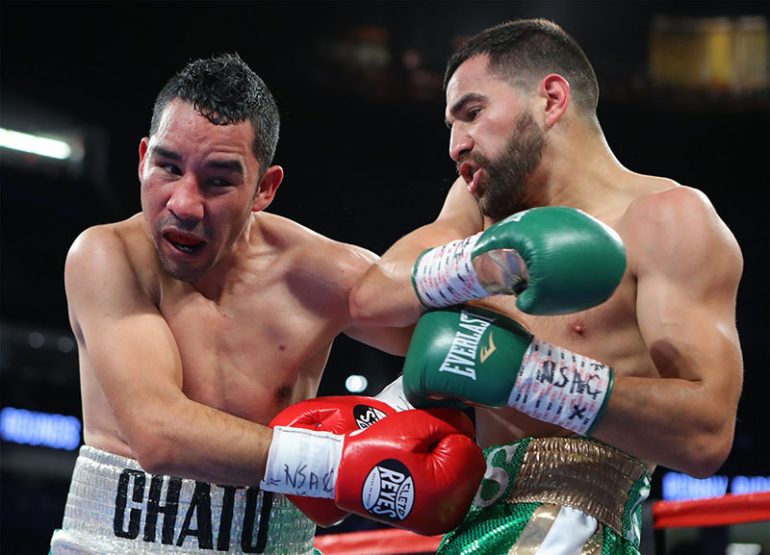 After logging frequent flyer miles or traveling on congested Southern California freeways for a fight, Ronny Rios is glad to finally have a “home game.”

Rios will face Azat Hovhannisyan in a junior featherweight crossroads bout at The Hangar at the OC Fair and Events Center, in Costa Mesa, California.

Unlike Hovhannisyan, Rios is very familiar with the area around the venue.

“On a good day with little traffic, it’s a five-minute drive from my house,” said Rios.

Preceding the Hovhannisyan-Rios fight, Alexis Rocha will square off against Miguel Dumas in an eight-round welterweight bout. Rocha is Rios’ younger brother.

At Thursday’s weigh-in, Rios weighed in at 121.8 pounds, the lightest he has ever weighed as a pro. Hovhannisyan tipped the scale at 121.2 pounds.

Rios (29-2, 13 knockouts) is coming off a 10-round unanimous decision victory over Deivi Julio Bassa in his most recent bout on December 2. The fight against Bassa was three months after his unanimous decision loss to WBC junior featherweight titleholder Rey Vargas.

“I wanted to return to the ring as soon as possible after the Vargas fight,” Rios told RingTV.com in a phone interview. “I’m not one to sit around and do nothing. I was back in the gym immediately after the fight.”

Rios will face a formidable foe in Hovhannisyan, who has won his last seven fights, including five by knockout. In his most recent bout on September 23, Hovhannisyan, who is originally from Armenia and currently resides in the Los Angeles area, scored a one-sided 10-round decision over Sergio Frias.

The 28-year-old Rios may be the betting favorite but he is not overlooking Hovhannisyan, who is a year older.

Rios is currently ranked No. 4 by the WBC and No. 10 by the WBO. A fight against Hovhannisyan is risky, as he has everything to lose, should he not emerge victorious.

A win over Hovhannisyan (13-2, 10 KOs) puts Rios in line for another opportunity for a world title belt. Despite not currently holding one, Rios believes he is among the elite fighters at 122 pounds.

“I know I’m amongst the best fighters at 122 pounds. I learned a lot from the Vargas fight. There isn’t a fighter that I believe can beat me on my best day.

“I really put a lot of work in for this fight. I’ve never felt this confident going into a fight the way I do against Hovhannisyan. My preparation for this fight was the best and I believe I will not only secure a victory but can do so impressively. You will see the best Ronny Rios (tonight).”