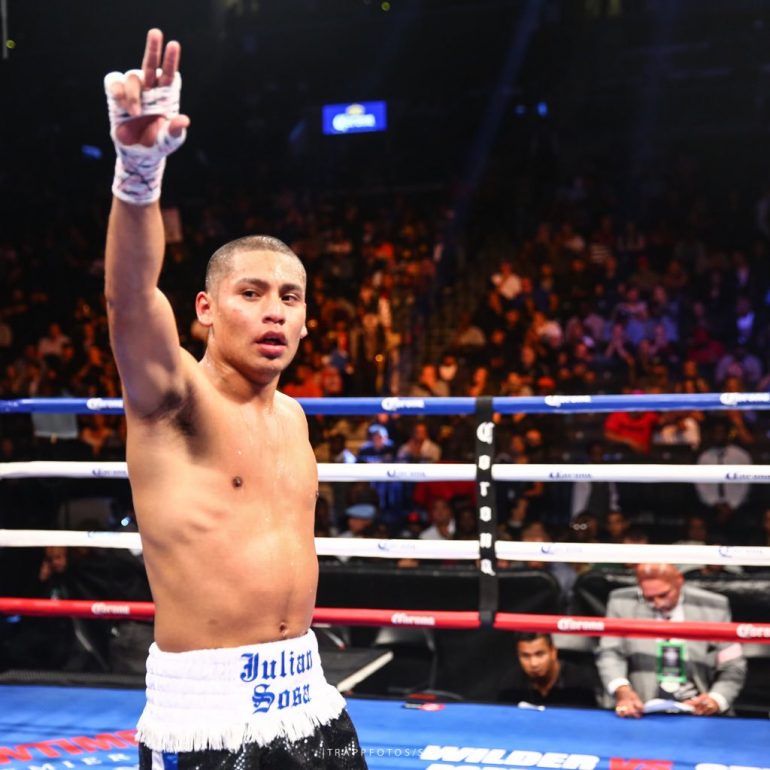 NEW YORK — Julian Sosa lives a busy life. He’s a full-time student at College of Staten Island, in his junior year studying music technology. He’s also an undefeated welterweight prospect with a 10-0-1 (3 knockouts) record. It’s a lot for a 22-year-old to have on his plate, and he finds himself stretched between the scholastic life he always assumed he’d follow and the boxing life he suddenly realized he was built to thrive in.

“I didn’t expect it to go this far,” said Sosa, who will fight at Kings Theatre in his native Brooklyn against Wilmer Rodriguez (9-1, 7 KOs) this Saturday. “I knew that I was very talented at this sport, but I always saw myself going the school route. Now I see how good I am in the professional ranks and how far I’m actually going and what I’m achieving.

“You could say that it took me two years to notice that I could do this as a living if I put my mind to it.”

His manager, Felipe Gomez, understands how tough it can be for a young man trying to decide on a life path. He was a two-time New York Golden Gloves champion himself, and had grown accustomed to supporters telling him he’d make a fine pro. Instead he opted for a more stable career with the New York Police Department, and he encourages young boxers to have a backup plan in case fighting doesn’t work out.

Splitting time between two worlds means Sosa can’t commit his full attention to boxing, with additional conditioning work to unlock his full potential. It’s the reason why Gomez had turned down appearances on “ShoBox: The New Generation” and has matched his fighter carefully. It also means that Sosa still has a lot of room for improvement after he finally hangs his degree on the wall.

“For him to be 100 percent, it’s kinda tough,” said Gomez. “He’s not focused 100 percent in boxing, but it goes to show the talent that he has, because he goes to school full-time and then he goes to the gym. So it’s not like he really has a full day where he can go to conditioning and then go to the gym later on.”

Sosa hopes one day to be a music engineer, sitting behind a soundboard hitting buttons in the studio. But he loves boxing too, and has since the first day he followed his father, Aureliano, a pro with a 4-2-1 record and a former top amateur in Mexico, to the gym at age 6 or 7. He says something “clicked” the moment he walked inside, and after watching for a time he asked to train as well.

He found himself in every national tournament for his age group, winning Junior Olympic Regionals, making it to the semis of the Ringside World Championships and competing in the PAL Nationals.

His father still trains him at the Atlas Cops and Kids Gym in East Flatbush, Brooklyn. The gym is his other classroom — where he learns to turn his punches over better, where he thinks about how to deal with the headbutts, shoulders and other dirty tactics he now encounters in the world without headgear.

His competition hasn’t been stiff yet, but there’ve been a few cool moments early on, like when Floyd Mayweather Jr. just happened to stroll into the locker room to watch him warm up before a fight at Barclays Center.

“I was just warming up and out of nowhere Floyd Mayweather, he comes into the room and he’s just looking at me. He doesn’t say nothing, he just looks at me, he does a little smile, he shrugs his head and he walks out. It just happened so fast, I couldn’t really soak in that Floyd was watching me warm up,” said Sosa, who cites Vasyl Lomachenko and Salvador Sanchez as fighters he looks up to.

His fight this Saturday will be his first 8-round assignment, but isn’t likely to be his acid test. Rodriguez has fought just once outside of the Dominican Republic, losing by fourth-round stoppage to Abner Mares all the way back in 2006 as a bantamweight, after which he didn’t fight for a decade. He’s fought just once since, in January of 2017, stopping a fighter with no wins.

The upside to Sosa is that he can fight; he’s a left-hook puncher with solid bodywork who knows his way around the ring. He’s also a ticket-seller, which means promoters will want to book him on the undercard to fill out the stands on big shows. Gomez says he took 350 tickets for Saturday’s fight, which headlines a card promoted by Evander Holyfield’s Real Deal Sports & Entertainment, and had moved $30,000 in tickets for the Barclays shows.

Gomez is sure his patience will pay off with Sosa, comparing him to another fighter who turned pro young, then had a few hiccups and uneven performances before blossoming into a champion.

“Right now he’s still a baby, he hasn’t really grown and matured,” said Gomez. “I look at him like he’s the next Canelo (Alvarez). When the time comes that he’s mature, he’s gonna be a lot stronger, a lot better. He’s gonna have all the experience. He’s gonna be a young veteran.”