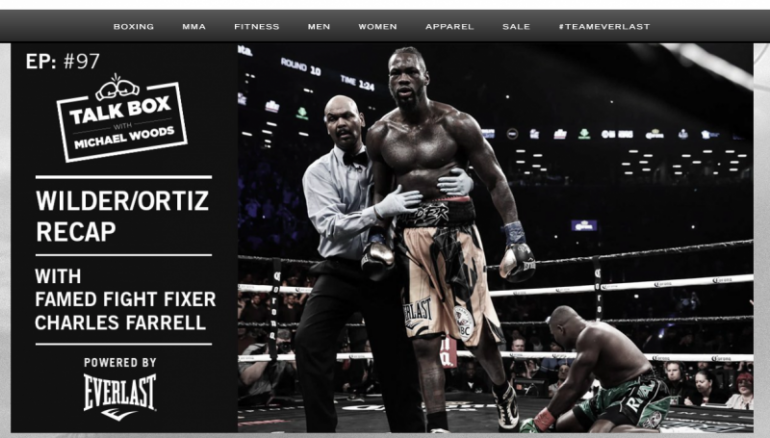 Former fight fixer Charles Farrell blew up the boxing internet the day before WBC heavyweight titlist Deontay Wilder battled Luis Ortiz at Barclays Center on Showtime, last Saturday, with his bold effort for Deadspin titled, “Boxing is going to get Deontay Wilder-Anthony Joshua if it has to fix the entire heavyweight division.”

Farrell came on the Everlast “Talkbox” podcast to talk about the story and how he looks at the heavyweight face-off now, as he was present at Barclays Center, and was able to see up close that Wilder isn’t as wretched as he’d previously believed.

Farrell explained where he came from and how he got into the boxing sphere. “I grew up in Boston, and there was good local boxing there,” he said, noting he saw late-issue Sugar Ray Robinson live. He played music and was working in clubs, where he came across “savory” types, gangsters. Some of them asked about what he knew about fighters, in the context of them wanting info on how to handle a bet. He then segued into managing fighters, “I went from being a big boxing fan to being enamored of the business itself, which the more you learn about, the more compelling, the more byzantine it becomes, the stranger it becomes, the richer it becomes.”

So, did the “dirty” side attract or repel Farrell or was there a mix? He said he was initially bummed that some of the dynamics that applied to especially older guys on the downside were present. And was there a point he recalls in which he stepped over the line, decided to go there, fix a fight? “I stepped over very consciously,” he said, offering that he thinks what some might see as an “underbelly” atmosphere is not that. He thinks that many of the operators are disenfranchised and so they deserve to get a better deal, through a fix situation, than they’d otherwise receive.

He went on to note that he wouldn’t offer details on fights he’d fixed because, frankly, it could be counterproductive to him to do so. Some of the people involved would not be pleased to have that info divulged. He said two heavyweight championship fights were fixed and he had a hand in those efforts. He said he was friendly with one ex-champ and that guy had a “high-profile fight out of the country,” for which he admitted he wasn’t in great shape. He and Farrell then conspired to get on the same page, so both the fighter and Farrell made extra money by having the fight play out in a set way. In the second occasion, Farrell said, “his fighter” was in over his head, he thought, and he didn’t want him to get hurt, so Farrell approached the other side, to try and insure his guy wouldn’t get too hurt. He is, by the way, finishing a book which should get into more depth on those scenarios.

On Talkbox, Farrell admitted he was keen to fix fights for Leon Spinks and he’s willing to go on the record on that. But he won’t name names on people who did him favors and the like…

We discussed an acquaintance in common, Vin Vecchione, who masterfully managed Peter McNeeley to a juicy payday against Mike Tyson in 1995. Farrell told listeners he got a cut from Vecchione’s “extra” earnings from the Tyson-McNeeley fight, which came about, Farrell says, because Vecchione deliberately ended the fight early and abruptly, in order to make money betting on the “under.” Farrell further explained how he got involved in that Vecchione plot and said his participation was “ancillary.”

We then jumped into the Wilder-Ortiz piece and Farrell told us that he was “about 80 percent” certain that the fight would play out with Wilder winning a “fixed fight” quickly, with Ortiz crumbling early on. “The fight didn’t go at all the way I thought it would,” he acknowledged. Basically Farrell thought Ortiz could easily dispose of Wilder if he was really trying because, essentially, he didn’t think highly of Wilder’s arsenal.

And does Farrell feel bad for Ortiz, for speculating that he’d likely be looking for a soft place to lie down? He said he was working on a follow-up, which, in fact, posted to Deadspin after our podcast chat. Read it here.

Farrell admitted also that Wilder’s right hand is a real deal weapon and his heart is also top-grade. In his eyes, Ortiz looked very diminished and Farrell didn’t nail his deterioration, while crafting his “A fix is likely” storyline.

I told Farrell that I thought Deadspin could have served him and readers better by adding an opener clearly outlining that Farrell was engaging very much in informed speculation in the initial piece.

And looking ahead…does Wilder have a chance to beat IBF/WBA titleholder Anthony Joshua when that match gets made? Farrell does not think Wilder has a chance to beat Joshua and, “To me, this is a bridge too far for Deontay Wilder. I just can’t see it.”

My three cents: Farrell is a complex cat and a fascinating study. He traffics in the gray area, the nuanced section, so I will be certain to order that book when it comes out. I appreciated him standing tall and facing questions, after his bold assertion played out in the other direction.