At age 50, Alicia Ashley has more world records in sight 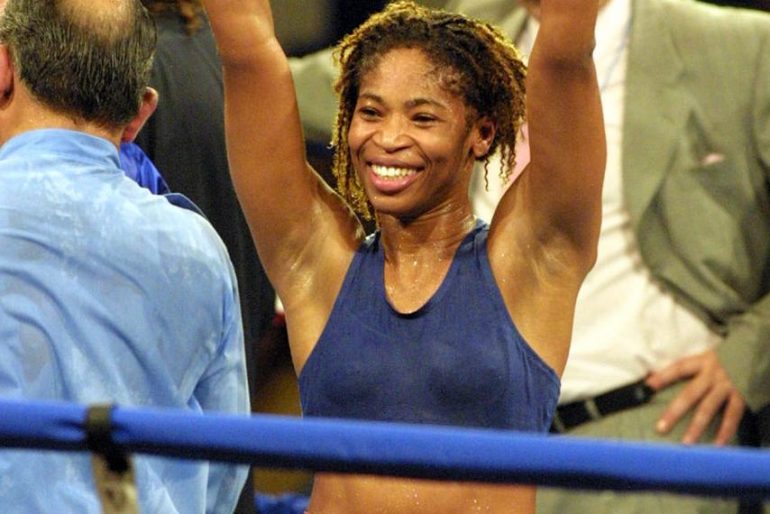 Alicia Ashley will be 50 years and seven months old by the time she steps into the ring, this Saturday, in Denmark. Few notable boxers, male or female, are still fighting past 40, and virtually none over 50. It’s a fascinating statistic but one she doesn’t think about when she’s in the ring, or really ever until someone else brings it up.

“I feel good. That’s one of the reasons I’m still fighting,” said Ashley (24-11-1, 4 knockouts), a Brooklyn, New York, resident who came to America from Jamaica when she was 11. “Not just that but the fact that I still love the sport and I actually don’t feel like I’ve done a lot of fighting.”

There are few secrets to her longevity. She’s taken care of her body, rarely venturing more than a few pounds over her fighting weight. She has a measured, defense-first fighting style that doesn’t allow her to take more punches than is absolutely necessary. She also started late, having not picked up the sport until she was 28.

After 19 years as a pro boxer, she says she’s nearly done. Not because she’s feeling her age or has taken too much punishment, it’s more out of a sense of frustration with a fickle business which offers few opportunities to women, particularly those who enter the sport at an advanced age.

“Some people might say there isn’t ring rust but there is and it takes a bit longer to get back into the swing of it, which is another reason why I don’t see myself fighting for much longer because to only fight once a year won’t cut it,” Ashley says.

There’s still more business for her left to accomplish, beginning with her 10-round bout with Dina Thorslund (10-0, 6 KOs) at the Struer Energi Park, with the vacant interim WBC junior featherweight title at stake. A win would put her in line for a second fight with Fatuma Zarika, the woman to whom she lost her 122-pound title by a split decision in 2016.

It would also cement her not only as the oldest female boxing champion, a distinction with which she was already recognized by Guinness World Records in 2016, but as the oldest champion, period.

“A lot of people, they keep saying the oldest female world champion but I am the oldest champion, not just female, because I did beat out Bernard Hopkins by about two months. People don’t equate it they just think of me as the oldest female champion and, at age 50, there’s nothing you can say about it,” said Ashley, who is managed by Luigi Olcese and trained by Luis Guzman at Gleason’s Gym and former champion Ada Velez in Florida.

Her father, a dance choreographer, first introduced her to dancing at the age of six. She earned scholarships to the famed Alvin Ailey and Martha Graham dance schools and dreamed of touring the world with a company as a prima ballerina. That was, until she tore her meniscus at age 19 and had to hang up her tutu.

She started practicing karate at the suggestion of her brother Devon as a means to stay in shape, and then competed as a kickboxer. Boxing became something she did to improve her hand skills, but it eventually took over as her primary discipline. She turned pro in 1999 but there few opportunities for a woman making her pro debut at age 32.

“When I started out, I just took whatever fights came to me, which is why I ended up on the road so much. In that sense, because there was no working the career along, I had losses because there are some fights a promoter wouldn’t have made me to fight,” said Ashley.

Having a promoter would have kept her from taking fights she shouldn’t have, like when she was outweighed by nearly 10 pounds against a junior welterweight in her sixth fight, but, otherwise, she would have done it all over again.

“My record wouldn’t be what it was. That’s the only sense I regret it in. Others, no because every fight I went to, even though I was a major underdog, I enjoyed it,” said Ashley.

Ashley fought everyone and anyone, from pioneers to champions like Chevelle Hallback, Layla McCarter, Marcela Acuna (three times), Elena Reid, Lisa Brown and Jackie Nava and competed in 12 different countries. There seemed no place she wouldn’t travel to for a fight, including, most improbably, North Korea, where she fought Myung Ok Ryu for the WBC junior bantamweight title in 2005.

“That was scary,” Ashley said laughing, almost in relief. “That’s the first thing that comes to mind is ‘scary’ because that was actually I think the first time they were letting in Americans and I wish I had my Jamaican passport so I could say, ‘No no, I’m not American!’

There’s a certain comfort to fighting abroad for Ashley. She is more recognized in other countries where she’s fought than she is at home, in part because women’s boxing is rarely – if ever – televised in the U.S. and gets treated better by networks in other countries.

Usually her trips are in-and-out of the country to fight but, a few times, she’s been able to enjoy herself. Like when she went to Mexico two weeks early to acclimate to the altitude and toured Mexico City. Or after one fight in Argentina when the promoter invited her to a beach barbecue after the fight. Or even in Germany, when her luggage got lost.

“I ended up shopping every day so that was fun,” Ashley says.

Asked whether she feels it’s gotten better for women from when she first started, her answer was yes, but only if you have a medal around your neck.

“Yes, they’re showcasing the women that just came out of the Olympics but I still don’t see it. They’re not really showcasing female boxing. You had Christy Martin; you had Laila Ali, and I kind of still feel they’re doing the same thing. They’re centering it around one or two people and that’s not gonna sustain the sport for females,” said Ashley.

“If you’re still just showcasing one person and that one person only fights every four, five or six months, you’re losing the interest that you would have. This is why so many female fighters are jumping into the sport of MMA. Because every show that you see on television, there’s at least one female fighter showcased on it.”

The lack of television coverage impacts her bottom line as well. Ashley’s biggest purse was $30,000 for her 2014 fight against Nava and that came after her team fought their way up from an initial $12,000 offer. There have been much smaller purses than that, which also means she won’t miss the money when she’s done fighting.

“I’ve already been doing a life after boxing. Women don’t make anything with boxing. So already, in the last 10 or so years, I’ve been a trainer (at Gleason’s Gym). That’s my main job and boxing for me is pleasure,” said Ashley.

While big purses have eluded her, she has earned an abundance of respect.

“Known for skill, spirit and style, she is not only a top champion but, when it come to aging and fitness, a role model to women everywhere,” said WBC President Mauricio Sulaiman, whose organization honored her for her Guinness record at their second female convention in 2016 in Tijuana, Mexico.

She’ll be able to bank away a bit more respect if she can defeat Thorslund, who, at 24, is less than half Ashley’s age.

“Alicia can win this fight. Thorslund is a young undefeated prospect with a strong promoter (Sauerland Promotion) fighting at home. Ashley’s been there. She knows how to win rounds. Thorslund has never seen what Ashley is bringing to the stage,” said Olcese, whose flight to Denmark was canceled due to the snowstorm which affected the Northeast.

“I kind of think she still has an amateur style. She comes at you and she’s busy but I’ve also fought a lot of fighters like her,” said Ashley.

A rematch with Zarika fell through twice in 2017, first when the Kenyan veteran withdrew with an injury and then later in the year, when a purse bid involving the main event fighter Jennifer Han made it impossible to also keep the Zarika-Ashley II fight on the card, Olcese says.

Ashley figures she has another year or two left in her to fight. She wants the rematch with Zarika, saying she was “not there mentally” in their first fight due to incidents during fight week. “That’s one thing that’s really digging at me,” she says.

“If I do this fight, win, and then can’t fight Fatuma in the next six months, it really does nothing to me,” said Ashley. “Definitely if I can’t fight three times this year, then I’m gonna be hanging it up.”

It’d be nice to eventually get widespread recognition at home for the career she’s had, Ashley says, but it doesn’t keep her up at night. She needs no further affirmation that she’s lived an exceptional, accomplished life. But it’d be nice.

“I think I already have the respect because a lot of the people that I talk to show that. Recognition is another thing; that’s the one thing that I really don’t have. Not just in the boxing world but (from) the laymen,” said Ashley.