Were scorecards favoring Deontay Wilder that far out of line on March 3? 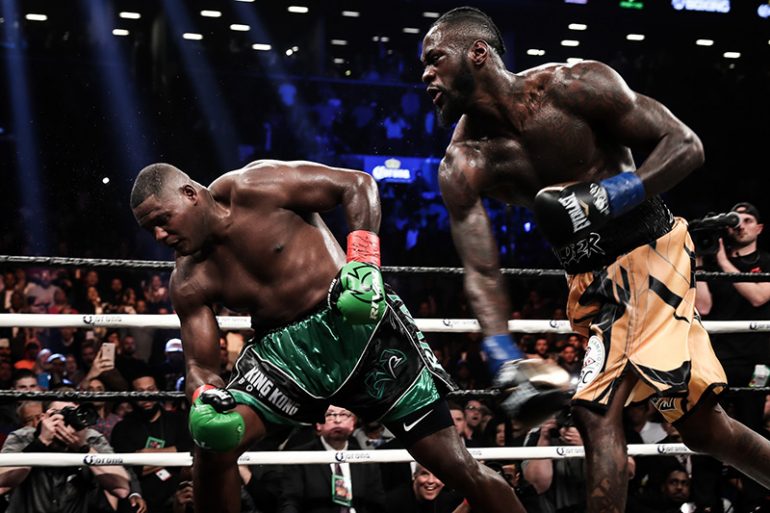 Deontay Wilder turned in one of his best – if not his best – effort since turning pro, last Saturday, but shamefully, part of the shine was removed from the performance because, after the bout, so many folks were aghast that the three official ringside judges all had the Alabaman ahead after nine completed rounds.

So instead of observers fully focusing on how the defending WBC heavyweight titlist weathered a storm and stayed centered, to come roaring back to drop one of his right-handed grenades on Luis Ortiz, they bemoaned the “weak” work of the three judges assigned by the New York State Athletic Commission.

I take issue with the vehemence directed toward the judges and want to take the opportunity to explain how it’s within the bounds of reason that the arbiters could see Wilder (40-0, 39 knockouts) winning after nine.

In round one, nobody clearly won the first minute of the round. Ortiz’s power shots at 1:59 and thereabouts gave him the second minute but not by much, as neither man was that busy. Ortiz throwing maybe one more power punch than Wilder in the last minute likely gave him the round. Ortiz won it 10-9, tight round; no one ran way with it at Brooklyn’s Barclays Center.

In round two, in the first minute, Wilders’ jab was active; Ortiz (28-1, 24 KOs) merely followed him. Ortiz maybe nicked the second minute with a power left, which was made less effective by him slipping to the mat after he threw it. The final minute left the round up for grabs…Ortiz was a mite busier and one straight left to the body looked solid, so he gets the round. Ortiz 10-9 but nobody ran away with it.

To round three – in the first minute, Ortiz was the more effective aggressor. The next minute was lame; no one deserved to take that 60-second span…so the last minute had the round up for grabs. Wilder hurled a couple combos, so he maybe stole the round, with better work in the last minute, when judges are more likely to ponder harder. Wilder 10-9 but it could have gone either way or been an even round.

In the fourth, Wilder got busier, with rights and one-twos, and took the first minute. Ortiz pressed more than the Alabaman and took the second minute. That left the final minute up for grabs…Ortiz took it with a straight left at the bell and Wilder lost it probably by not working any offense. Ortiz 10-9 but it was neither man’s difinitive round.

So, after four, my card, during this DVR-aided re-watch: Ortiz winning, 39-37…but since the rounds were close, with nobody pulling away in any round, no judge could be admonished if he saw it differently, if they saw it 2-2 or 3-1-1 Ortiz.

To round five…In the first minute, it was close, with the crowd telling you with boos that they wanted more. Even in the first 60 seconds. Ortiz was barely busier in the second minute, so he got that piece of the round. The final minute would offer the round winner. A Wilder knockdown at 12 seconds to go did just that. Wilder won the round, 10-8, and my card was now 48-47 Ortiz. Close fight, right?

In the sixth round, Wilder threw a couple of combos that snagged him the first piece of the round. Wilder didn’t press and the middle minute was even, so the final 60 seonds would sway the frame; Wilder probably landed the single harder shot in that bit and the round, so you could give him the round. Wilder 10-9…but it might have been an even round. That said, my card is 57-57. At this juncture, Steve Farhood has it 57-56 Ortiz.

In round seven, no one was the ring general in the first minute. From 2:00 to 1:00, Deontay was a bit busier and his defense was smart, so the final third of the round would determine its winner. And that was Ortiz because he stunned Wilder, who stayed aloft. He didn’t go down but the three official judges gave the Cuban a 10-8 round. I think Ortiz deserves a 10-8 but Deontay maybe keeps a point for his chin and heart. Ortiz, 10-9, is a plausible score… and my second-watch card is 67-66 Ortiz. If I had decided to score the fourth even, it would be 66-66, not an implausible scorecard.

In round eight, the round didn’t start on time, because referee David Fields called time, after the bell rang to start the eighth, so he could bring Wilder over to the doctor, for some extra assessment. About 22 seconds elapsed from when Fields called time. The doc looked at Wilders’ pupils, determined his brain function was OK. Wilder went to the other corner; Fields called time in and the action resumed. The Cuban looked to press his advantage from round seven and went hard to win the first minute. Wilder defended well but wasn’t offering offense, so he lost the second minute as well. Ortiz kept attacking, won the last minute and clearly won the round, as well. My card: Ortiz was up 77-75.

Round nine, then. Ortiz was busier to start off the round. From 2:00 to 1:00, Wilder was more alert but the 38-year-old landed more. Wilder then stole the round, when he landed a right hand that mildly buckled Ortiz. Ortiz led 86-85, on my second watch.

And the 10th was abbreviated. I didn’t tally because Wilder stopped him. So…If I’d gone 2-2 in the first four rounds, then I’d have Wilder up one. And indeed on the cards of Glenn Feldman, Kevin Morgan and Carlos Ortiz Jr., they did see the first four rounds as being 2-2. And all three gave Ortiz just the seventh and the eighth, after round four.

This is what it comes down to: The first four rounds were tight. “Nobody ran away” with the first, second, third or fourth. Scoring two of the four for Wilder you might not agree with but that is no abomination. That is a two-point swing and that explains the three judges’ scores, my friends. CompuBox says Wilder out-landed Ortiz in round two and, in the third, Wilder was maybe busier in the late stretch, maybe stole it…

Anyway, lots of maybes were unfolding in that ring on March 3. Lots of space in which subjectivity was in play and, yes, within the bounds of reason to see it how Feldman and Morgan and Ortiz saw it. So anyone saying that seeing the fight as those guys did makes them blind or telling us anyone agreeing with the judges doesn’t know what they are watching, all due respect, get over yourself. Consider being less cocky about your knowledge and try to grasp how subjective judging prizefights can be.

So there’s that issue, with the scoring, and hopefully maybe that helps clarify a little bit what was going on in the moments and days after, when so many folks were in pitchfork and torches mode, and proclaiming anyone who didn’t see Ortiz as being a clear winner, at the time of the stoppage, a buffoon, or what have you…

Also percolating days after the fight is the claim put forth by the Ortiz camp, their stance that Wilder was incorrectly given extra time after his difficult round seven, to recover. A member of Team Ortiz reached out to me, asking about that spot, when the ref brought Deontay to a doc for an extra check-up, after round eight had already started. I told the Ortiz crew-member that, in fact, I’ve seen this occur in many fights in New York in the last year or so, after the state lost a massive judgement to Magomed Abdusalamov’s family because the legal system acknowledged authorities could have handled the heavyweight’s case better after he absorbed heavy punishment from Mike Perez at the Madison Square Garden Theater in November of 2013. They’ve been extra careful in making sure boxers have an acceptable level of faculties during bouts and that includes taking extra time to assess fighters, above and beyond the minute given for rest between rounds. Thus I said, I didn’t see anything odious, any favoritism, being offered to Wilder on March 3.

I also asked the New York State Athletic Commission to weigh in, offer some clarity on this practice, this “extra time” assessment period:

“The ringside physician used an additional five seconds to examine the fighter after the standard one-minute rest period between rounds. It did not change the course of the fight,” responded NY State Department spokesperson Lee Park. “In New York State, ringside physicians have the authority to call a ‘time-out’ if they determine that more time is needed to evaluate the neurological status of a fighter during the course of a bout. Such a time-out is called after the one-minute rest period between rounds and is carried out in the shortest possible time, so as to not interrupt the course of the bout or give an undue advantage to a combatant. This established protocol was followed in the course of the Wilder vs. Ortiz bout.”

My three cents: The best way to keep the judges from affecting the event is to stop one’s foe; that should go without saying. I think this certainty isn’t mentioned as often as it should be, in the context of how “B-side” fighters and trainers should plan their strategies. You are not likely to get benefits of the doubt if you don’t own more leverage coming in, so act and plan accordingly. And as far as Wilder getting extra time, let me repeat, there’s nothing to see there. NYSAC was following a protocol in place for awhile now and it’s a “better safe than sorry” practice, never a bad thing in this most sweet-but-more-so-savage-science. Let us hope that in the next high-profile heavyweight contest, we see action that allows all of us to clearly determine its winner…and can all agree to try and not get into up in arms mode so reflexively, reminding ourselves that different people see things in the ring differently and, sometimes, the “robbery” is just a mere difference in opinion.