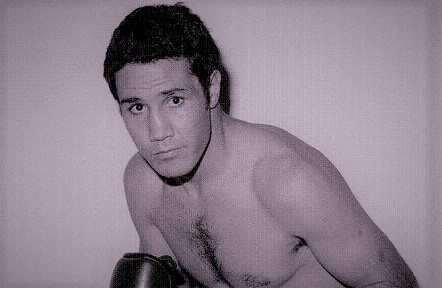 Photo courtesy of the WBC.
08
Mar
by Anson Wainwright

Big-punching lightweight Rodolfo Gonzalez regularly thrilled audiences in Mexico during the late-50s-early-60s before migrating to the West Coast of the United States. During his 15-year career, he won the WBC 135-pound title as an underdog and made two successful defenses.

Gonzalez was born on his grandfather’s farm in a small town south of Guadalajara on December 16, 1944. He was the second of nine children.

As a youngster, Gonzalez was interested in boxing, but it was his cousin, bantamweight champion Jose Becerra, who taught him the rudiments of the sport. Later, Mexican veteran Kid Azteca, would help Gonzalez develop his signature shot – the left hook to the liver.

With no amateur experience, Gonzalez turned professional at just 14 in 1959. The former champion admits to being nervous facing a 27-year-old man, but he had nothing to worry about. “El Gato” demolished the older man in less than three minutes.

Gonzalez built something of a reputation south of the border, earning the nickname “El Nino Del Nocaut” (The Knockout Kid) by winning 50 of his first 52 bouts inside the distance.

In one of those fights, Gonzalez travelled to Morelia, Michoacan, to face the best fighter in town. He was given no chance to win, however, the underdog was getting the best of it when an uninvited guest arrived.

“The referee was jumping from side-to-side. Somebody brought a broom to the referee and he killed the snake. He picked it up and threw it back to the people. The fight continued and I won. These things only happen in my country – Mexico.”

Shortly after making his U.S. debut in 1963, the hotshot contender was diagnosed with liver cancer and told he had less than a year to live. But one evening, while staying at his mother’s house in Tijuana, the deeply religious catholic claims he was visited in a dream by the Virgin Guadalupe who encouraged him to attend her church.

Loaded with morphine, Gonzalez made a pilgrimage to that church and laid himself at her mercy. Within a short period of time, the fighter’s condition improved and he walked home unaided. When Gonzalez sought further medical opinion, doctors were incredibly unable to find a trace of the cancer which had threatened his life.

Following this miracle-cure, Gonzalez moved to Long Beach, California, to resume his career after almost three years out of the ring. Initially that proved to be a struggle and he lost twice to a featherweight novice named Bobby Valdez in 1965 and 1966.

However, by October 1968, Gonzalez had recaptured his old form and scored a 10th-round stoppage over the physically imposing Ray Adigun

“The Olympic Boxing Promotions offered me $800 for that fight,” he said. “When I arrived at the arena, people would look at me with compassion. They probably thought I was going to take the worse beating of my life.

“I was losing until I got the opportunity to hit him with the liver punch and down he went for the count of 10. The people liked the outcome of that fight so much that they threw more money into the ring than what I got paid for the fight [laughs].”

In the fall of 1970, Gonzalez met future world champion and hall-of-famer Antonio Cervantes. “I had him on the canvas with my liver punch in the second round,” he explained. “Cervantes got up and ran all night. The referee stopped the fight in the eighth round because I had a cut eye. Although I was ahead in points, they gave the fight to Cervantes.” 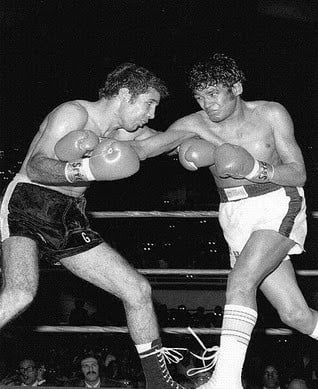 Gonzalez returned to winning ways and signed with powerful manager and ex-fighter Jackie McCoy. His new team quickly set up a bout with the fighter known as “The Father of Mexicans”, Jimmy Robertson, who had a notorious reputation for defeating Gonzalez’s countryman.

Not this time. Gonzalez handily outpointed Robertson and then edged former two-time world title challenger Ruben Navarro to earn a shot at WBC lightweight titleholder Chango Carmona in the fall of 1972.

“I knew it was going to be an easy fight,” said Gonzalez, who was a 3-1 underdog. “(Carmona) was lost if you pushed him backwards. He didn’t know what to do and left himself open. He put his hands down going backwards. I could have won the fight in the first couple of rounds, but I wanted to give the people their money’s worth. I kept pushing him back the whole fight.

“Besides being one of the easiest fights of my career, this was the most important fight of my boxing career. When the bell rang for the 13th round and Carmona stayed in his corner, it was over for him.”

Afterwards, Gonzalez travelled back to Mexico and presented the title to the Virgin Guadalupe.

The new champion stopped old rival, Navarro in nine rounds in his first defense and impressively turned back the challenge of Antonio Puddu.

Gonzalez had hoped to secure a unification bout with the fearsome WBA titleholder Roberto Duran, but opted for a career-high payday of $80,000 to defend in Japan against Guts Ishimatsu in April 1974. A weight-drained Gonzalez was stopped in eight rounds and cut caused his downfall in a rematch eight months later.

After losing to Ishimatsu, Gonzalez decided to retire. He did so with a record (81-7-1, 71 knockouts).

In THE RING Yearbook for 2003, Gonzalez received recognition as one of the 100 Greatest Punchers of All Time.

Now 73, Gonzalez has been with his partner, Barbara, for 18 years. He was previously married and has four children from that relationship and six grandchildren. The former champion, who lives in Oceanside, California, is currently under contract to a Hollywood production company who are working on a motion picture of his life story.

Gonzalez graciously took time to speak to RingTV.com about the best he fought in 10 key categories.

BEST JAB
JUAN COLLADO:
He relied on his left jab in most of his fights. I would bob and weave to keep away from him. It was a constant fight until I did my side-to-side footwork. In the ninth round I got him with a left hook to the liver. That punch ended the fight.

BEST DEFENSE
JIMMY ROBERTSON:
He was called the ‘Father of all Mexicans’. He was a good defensive fighter and a hard puncher. Also, he was converted from a left-handed fighter to a right-hand puncher. I beat him in the 10th round. He was a bloody mess.

FASTEST HANDS
MARCELLO CID: Very fast hands and he threw a lot of combinations. I got him against the ropes with a three-punch combination in the fourth round. That ended the fight. 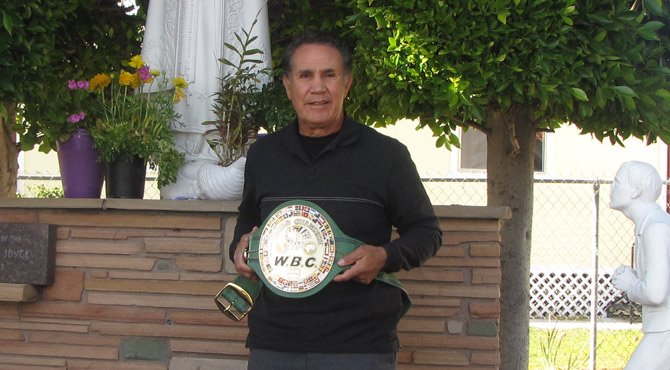 Photo courtesy of the WBC.

BEST FOOTWORK
ME: I never fought anyone who knew the footwork that I know. Of all the 89 opponents I faced, I never paid attention to their footwork. No matter what kind of footwork they had, or what kind of moves they made, they were going to be laying on the canvas. The fighter I respected the most, who had the best footwork, was a friend of mine, Muhammad Ali. He was and is the greatest of all time. I had the honor of being in training camp with him in the City of Hammett, California, when he was getting ready to fight my stablemate Kenny Norton. In the morning I got up to do my road work, but no matter how fast I ran, I was never able to catch up with him.

BEST CHIN
TORITO LOPEZ: I hit him on the chin, but it was like hitting the wall. He didn’t even blink, but kept on coming. Luckily for me my liver punch knocked him out in the fourth round.

SMARTEST
KID IRAPUATO: I was only 15 years old when I fought this man near Guadalajara. He had already fought world championship fighters like Pajarito Moreno and (Davey) Moore who was the featherweight champion of the world. He was a very skilled fighter. I got him with a liver punch and knocked him out in the sixth round.

STRONGEST
RAY ADIGUN: He was so strong. He hit me in the middle of the ring and sent me flying all the way to the ropes. He was not a fast hitter, just strong. The people in the audience called him “King Kong”. I caught him with a left hook to the liver in the 10th round.

BEST PUNCHER
ANTONIO CERVANTES: I discovered his right-hand power in the second round. Not only power but a sneaky right-hand punch. He faked a left jab, hit me with the right and put me down for an eight count. That irritated me so much that in the next round I hit him with a left hook to the liver and doubled up to the chin. He went down and his feet went up in the air. At the count of eight he got up. He was so afraid that he ran from me for the rest of the night. But he had power in his punches.

BEST BOXING SKILLS
CERVANTES: He was a very good boxer that moved in and out and side-to-side. He also had a long reach. The only thing he didn’t have was a strong chin. That means he couldn’t take a punch. Any fighter who has a pointed chin, I would put on the canvas right away.

BEST OVERALL
CERVANTES: He had long arms and strong power with either hand. He was tall and very smart. He would move in and out and hit at the same time. The only weak spot I found on him was his chin and immediately I put him down flat on the canvas. After that, he got up and ran for the rest of the night. But overall, he was an excellent fighter.