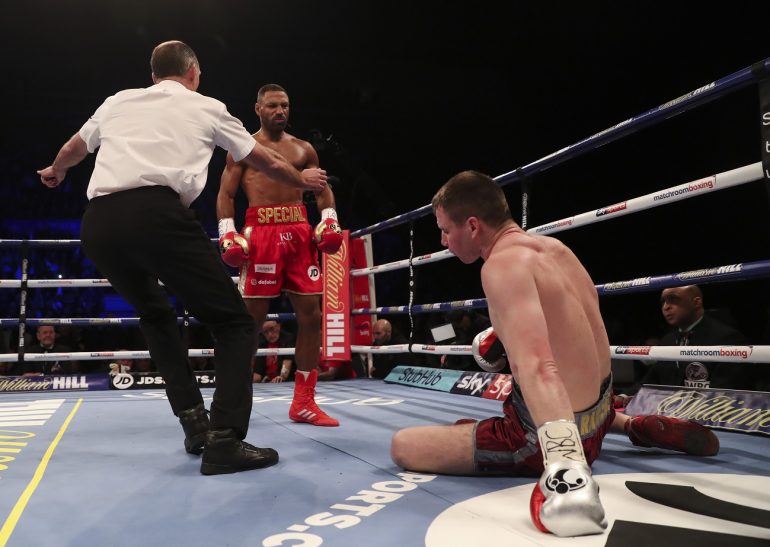 So Kell Brook is back in the mix, only this time, he’s going to try his luck, as he did on Saturday, in the 154-pound class.

Brook, age 31, was feeling heady after downing Sergey Rabchenko, via second round knockout, in Sheffield, England, and his optimism bubbled over hard.

“The desire is there and you could see in my performance that I’m back and I’m putting the guys at the top level on notice,” said Brook, after handing the Russian his second stoppage loss, the first being to Tony Harrison in 2016.

“I’d fight anyone. I’ve got nothing to prove in that respect, as I’ve boxed (unified middleweight titleholder Gennady) ‘GGG’ (Golovkin), Errol Spence Jr. and won my IBF title in America,” said Brook. “I’d like another test at 154 pounds to settle into the weight and get another great performance and then any belt out there, I want it. It’s my goal to become a two-weight world champion and I know I can do it. I’m accurate and I can land on anyone’s chin – there’s levels in boxing but if I hit them world champions with those shots, I will find their chins.”

He continued, “I expected a tough night’s work and 12 hard rounds and I was ready to do that. But once I got my range with the timing working, it was game over. You don’t get paid for overtime – rounds in the bank would be nice – but I know I could’ve gone on all night as I felt great in there. The longer the fight would have gone on the better I would have looked too, I was getting into my groove and my mojo is back. I was living next to the gym for the fight away from my family, so I was training, eating and resting, nothing else.”

The elephant in the room, I think, is Brook’s face. In 2016, Gennady Golovkin did a demo job on one eye and then Spence went at the other with surgical precision, when they tangoed in May 2017. Brook says he’s healed and wants a go at top-tier hitters at 154, where he suggests his body is better suited. (By the way, this is something his promoter Eddie Hearn has been saying for a few years, as he knows what a drain it was to have “The Special One” carve down to 147 pounds.)

“There’s a lot of history for me and Matchroom (Boxing) with Kell and that emotion spilled out after that brilliant win on Saturday,” said Hearn after the Brook win. “He’s one of the first fighters I signed and the GGG and Spence losses, plus the injuries, have been hard for everyone, and Saturday night was a massive moment for the career of Kell Brook. If he’d lost the fight, it was all over. If he didn’t look good, it was probably all over. If he’d been injured, it was probably all over. The way he dispatched Rabchenko, with the sharpness and the combinations, it was great. There was a brilliant energy in the (Sheffield) Arena and that was all generated because Kell Brook brings excitement every time he boxes.”

Hearn added, “I’ve always believed that Kell Brook is one of the biggest talents in world boxing – but I’ve also always believed he was boxing at the wrong weight. Kell always thought he could do 147 pounds and, in this day and age of social media, he was almost goaded into getting back to 147 pound to defend his title against Spence after fighting GGG at 160 pounds, people saying he was ducking Spence if he vacated and he wouldn’t do that. Take nothing from Errol Spence but I believe Kell beats him at 154.”

I think Eddie is in the minority there. Spence is a champ at 147 but I’m pretty damn sure the 28-year-old could hop to 154. And if he were to face Brook again, not only might he win again, it might be even uglier because Spence might be that much stronger at 154. What does his trainer Texan Derrick James think about a Spence vs. Brook rematch?

“Same results,” the trainer said. “Remember I told you that the first time I saw Brook fight.”

“There’s some world-class fighters at 154 pounds. The champions are all elite, and there’s some brilliant other fighters in the Top 5, but Kell can beat them all and be the man. Brook is a bigger name than (WBC beltholder Jermell) Charlo but he’s the champion, so make us an offer,” Hearn continued. “Rabchenko is a world class fighter but he’s not elite level. Kell proved he’s an elite-level fighter and we need another step-up in June or July and then we’re ready for the big stuff in the winter.”

“I was with Kell in October/November time and he was not in a good place,” said Hearn. “He was so overweight and he was going out and he didn’t care about boxing. He felt that a lot of the criticism he was getting was harsh but with the people around him and getting back into the gym, he realized that boxing saves him – he needs it in his life. When he’s in the gym, he’s happy, so, previously, when he’s won he’s just ballooned up and enjoyed himself. Now he said he’s going straight back in the gym and you’ve seen today that he’s done exactly that. At 31 years of age, you enjoy different things, spending time with the family over going out with the lads.

“He wants to feel healthy and spend time with the kids and be a role model in the gym. He’s at the stage in life where he wants to be settled and content and just get everything out of himself.”

I think there’s a solid chance that Team Brook will, in fact, steer clear of Spence; there’s other lower hanging fruit at 154…but it will take awhile for those options to coalescence, being that WBC titlist Jermell Charlo will be fighting TBA on June 9, and Brook wants an incremental step-up fight in that time frame, not a visit with a hungry lion. Also IBF beltholder Jarrett Hurd and WBA titlist Erislandy Lara are booked for a dance-off on April 7. Let’s see how that gets sorted before pondering either of them versus Brook. WBO welterweight belholder Sadam Ali will be looking to defend in May, against Liam Smith, so he needs to sort his business first before being in the mix for a Brook bout. In other words, moves on the chess board have to play out before we can get a clear look into Brook’s crystal ball for future endeavors. And man, busted right eye against GGG, busted left eye versus Spence…Bless Brook’s soldiering spirit!