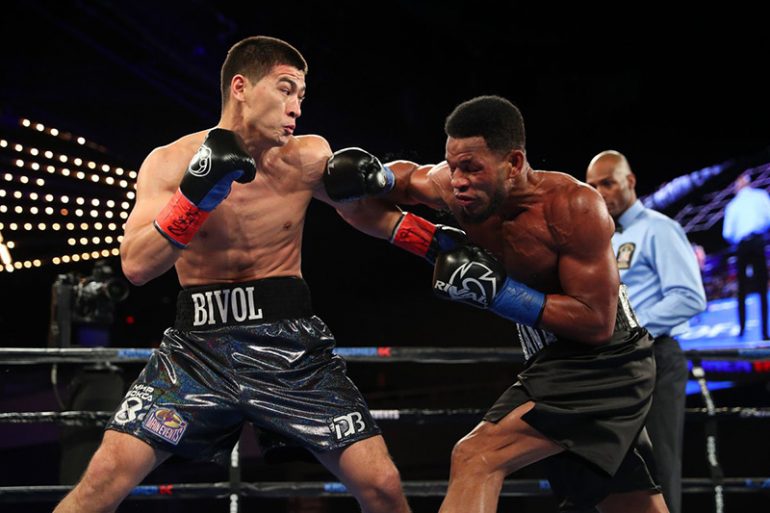 Dmitry Bivol stopped Sullivan Barrera in the final round of their WBA light heavyweight title bout on Saturday in New York City. A big right hand to Barrera’s temple put the Cuban standout down midway through the final round and referee Harvey Dock waved the HBO-televised fight off at 1:41.

It was a clash of top-10 light heavyweight contenders looking to break into the elite mix of the talented and wide open 175-pound division and Bivol (13-0, 11 knockouts), who retained his WBA belt, made a statement by being the first man to stop Barrera. However, he didn’t do it without spilling some blood and taking some lumps.

Bivol sustained a nasty cut on the outside of his right eye from an accidental headbutt in Round 2, had his nose bloodied in the middle rounds and sported an ugly bump above his left eye by the end of the fight.

However, the 27-year-old boxer-puncher from Russia by way of Kyrgyzstan, was the ring master for most of the fight. Bivol, THE RING’s No. 6 contender, was not only the faster, more mobile and sharper shooter of the two light heavyweights, he was far busier than Barrera, THE RING’s No. 7 contender, as well as the aggressor for the first half of the fight.

Barrera (21-2, 14 KOs), a 36-year-old technician from Miami by way of Cuba, appeared to be the bigger, stronger-looking of the two light heavyweights but he was not able to impose himself on the more athletically gifted Bivol, who worked a hard, educated jab and often punched in combination.