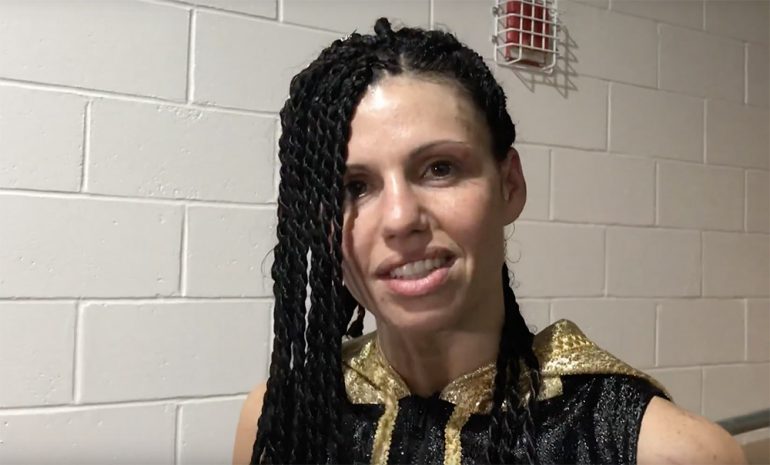 NEW YORK – Alicia Napoleon walked into Barclays Center and accomplished her mission for the night: to defeat the previously unbeaten Femke Hermans and raise the WBA women’s super middleweight title.

Napoleon, who hails from nearby Lindenhurst on New York’s Long Island and trains at Gleason’s Gym, had a sizable cheering squad on hand in Brooklyn as she walked down her Belgian foe, hurting her numerous times from the fifth round on with a smothering body attack and compact shots in close with both hands.

It was her first fight since signing with promoter Lou DiBella, and, appearing on the untelevised portion of the Wilder-Ortiz heavyweight title undercard, her first time fighting on a major boxing event.

“I know that this is in my path, and in my future there’s more to come.”

Napoleon’s fight was fourth on the card, entering the ring after three different Olympians (Richardson Hitchins, Gary Antuanne Russell and Sergiy Derevyanchenko) had opened the show in separate bouts.

DiBella tells RingTV he is looking at either May or June for the 32-year-old Napoleon’s next fight.

Being seen by fight fans and Showtime executives is a win for her, but Napoleon views it as a victory for other women in the sport as well.

“I really want to get all the belts and rise and I want my name to be known. Not just mine but all women. We need to rise in this sport. Time to elevate. Boxing’s gotta get with it,” said Napoleon.

“I think it really opened the door for me, but also [for] women.”