Regis Prograis consumes plenty of boxing books, but hopes to make his own history 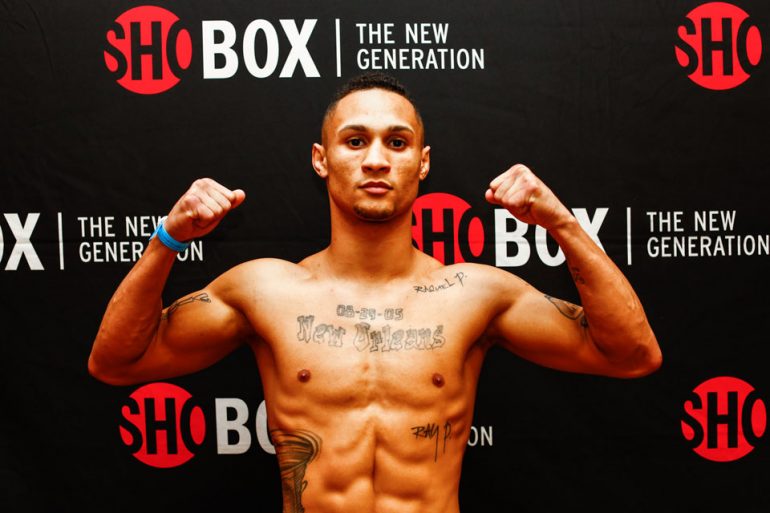 Regis Prograis has yet to make history of his own. That, he hopes, will come later in his career. After all, he’s just getting started.

But each day, he’s surrounded by history. When he peers at his bookshelf inside his Houston home, he sees the spines of tomes telling the tales of great fighters, like his all-time favorite, “Iron” Mike Tyson. Or In This Corner, where fighters chronicle their own legendary careers.

You see, Regis Prograis reads at least two books a month — 40 to 50 pages a day — though he tries to slow down when he’s in camp.

And these weeks of training have been his most important to date as he prepares for his first real test inside the boxing ring, a meeting with former unified junior welterweight titleholder Julius Indongo on Friday in Deadwood, South Dakota.

Outside the ring, Prograis (20-0, 17 knockouts) already, somehow, survived two hurricanes (one in his naive New Orleans, and another last year in Houston).

He reads to escape, and to learn the trials and tribulations fighters of yesteryear were forced to endure to reach true levels of greatness. Prograis has lofty goals of his own, and he hopes his Showtime-televised fight will prove he’s a star in the making.

“I definitely have a lot of hype around me but I don’t have a belt that comes with the hype,” Prograis, 29, told THE RING. “I want to prove people right. People think I’ll be the next star at 140, but I didn’t do it yet I definitely want to say grounded so I can keep working hard.

“I’m just doing me, I’m more of a humble type of person anyway. I’m not a flashy lifestyle [person], I just want boxing. I study the great fighters — I study all the great fighters, like [Roberto] Duran and Tyson. I just look up to them and want to be like them. You have to stay grounded until you get to that level.”

Beating a boxer like Indongo will help him start on that path. Prograis was originally slated to fight former titleholder Viktor Postol, but the Ukrainian withdrew with a hand injury. In stepped Indongo on short notice, another formidable challenge for someone who hasn’t faced a top-10 fighter yet.

The 29-year-old, nicknamed Rougarou, recently signed on with Churchill Management, led by Hollywood heavyweights Peter Berg and Mark Wahlberg, to guide his career, but Prograis isn’t interested in movies, at least not yet.

The Lou DiBella-promoted fighter wants to prove he’s ready for the likes of Mikey Garcia, who is chasing a title at 140 pounds on Saturday. And certainly to this point, Prograis appears to be the goods. His upper-body movement is excellent, and so, too, is his power.

“We are excited about the savagery that Regis wants to bring to every fight,” Churchill Management VP of Operations Sam Katkovski told THE RING. “He is a throwback fighter that you don’t see around anymore. With tonight’s victory he can put himself in a position for bigger fights and opportunities. We look forward to not only watching him fight but also telling his unique story to the whole world.”

In his biggest fight yet, Prograis was matched with fellow undefeated prospect Joel Diaz Jr. on ShoBox, but the cajun needed just two rounds to vanquish him. If he can take care of Indongo in similar fashion, fans will start beating the drums for an eventual matchup between Prograis and Garcia.

Maybe then, Prograis can get back to his books.

“I try to stop reading, when I start reading, I gotta finish it, I try to read it in a week or two weeks,” he said. “The Black Lights, real good boxing book, on Billy Costello and the business side of boxing. I feel like every fighter needs to read it.

“In This Corner, it’s about all the old fighters, interviewing all the great fighters. Somebody needs to make a new one.”

If Prograis has it his way, he’ll be featured in that version. But there’s still much left to accomplish.