Liam Smith is likely next for Sadam Ali, according to trainer 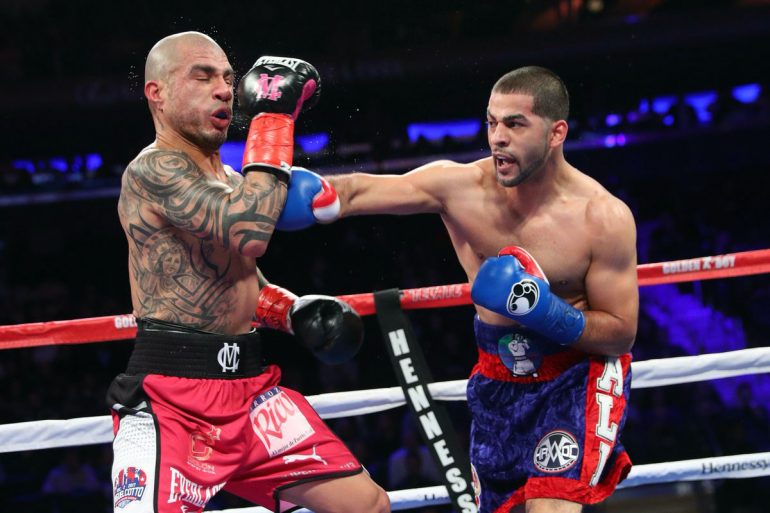 BROOKLYN, New York – It looks as if the next opponent for WBO junior middleweight titleholder Sadam Ali (26-1, 14 knockouts) may be Liam Smith on Saturday, May 12, as part of HBO’s Gennady Golovkin-Canelo Alvarez replay weekend, according to Andre Rozier, Ali’s co-trainer with Lenny Wilson.

Ali sent Miguel Cotto into retirement with a loss on December 2, 2017, winning the WBO belt with a unanimous decision. “World Kid” has now won four straight fights. Smith, the No. 1-ranked WBO 154-pound contender, is on a three-fight win streak since his loss to Alvarez in September 2016.

The venue looks like the Turning Stone Resort Casino in Verona, New York. The fight will be going up against ESPN’s Top Rank show featuring Fighter of the Year Vasyl Lomachenko, who’s possibly scheduled to fight WBO lightweight titleholder Ray Beltran at Madison Square Garden. Lomachenko does have the May 12th date circled and Madison Square Garden has been rented by Top Rank.

“As far as I know, it’s Liam Smith, and it looks like the Turning Stone,” said Rozier. “That’s what it’s looking like. We’re going to go up there and do what champions do.”

Smith (26-1-1, 14 KOs) beat Liam Williams on November 11 in an immediate rematch of their fight in April 2017, when Smith survived a bad cut over his right eyebrow to stop Williams in the ninth round.

Ali is coming off the most impressive victory of his career, a night which earned him both Comeback and Upset of the Year honors from THE RING.

“But before, guys didn’t want to give me a shot. I really don’t look into that. At the end of the day, I do what’s best for my career and also what my team wants me to do. I’m really ready for any challenge that’s next.”