An unprecedented battle for New York: Wilder vs. Ortiz vs. Kovalev vs. Mikhalkin 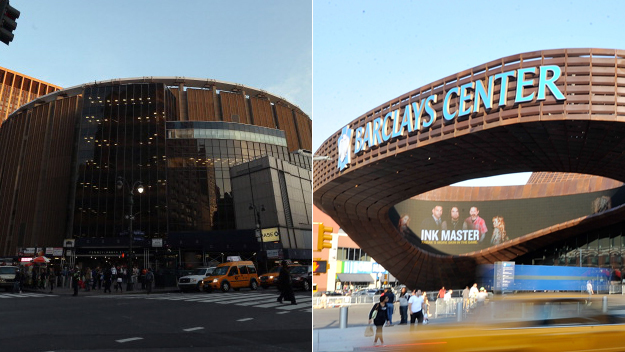 There have been literally thousands of boxing events in New York City since the earliest recorded match at the first Madison Square Garden, when heavyweight Herbert Maori Slade fought Jem Mace to a three-round no-decision on February 2, 1883.

There were times when there were multiple fight clubs operating throughout the city, smoky joints like the Eastern Parkway Arena in Brooklyn, Ridgewood Grove in Queens, the Kingsbridge Armory in the Bronx and St. Nicholas Arena in Harlem, and live boxing could be found virtually every night of the week.

But never in the rich pugilistic history of this nation’s brawlingest town has there ever been a night like Saturday night in New York.

For the first time ever, two major fight cards will take place on the same night, five miles apart, as the crow flies, when Sergey Kovalev defends his WBO light heavyweight title against Igor Mikhalkin at Madison Square Garden’s Theater and Deontay Wilder puts his WBC heavyweight title on the line against Luis Ortiz across the East River at the Barclays Center in Brooklyn.

Saturday will offer a smorgasbord to couch potato fight fans, who can easily toggle between HBO, which is televising Kovalev-Mikhalkin, and Showtime, which is showing Wilder-Ortiz, and if things break right, there is a real possibility that the two main events will not even overlap.

However it will pose a dilemma to fans wishing to be on the scene rather than watch on the screen, as Don King was wont to say, because there is no conceivable way to get from one venue to the other in time to see both fights.

And for Kovalev, who is both trying to rebuild a career and reputation shattered by back-to-back losses to Andre Ward, as well as establish himself as a house fighter in a city with a large and boxing-enthused Russian population, it could well be a missed opportunity for some much-needed exposure.

Going up against a heavyweight title fight is rarely a winning proposition for a light heavyweight, even one as popular and successful as Kovalev had been for the first 29 fights of his career, until he ran into Ward the first time in November of 2016.

Now, what was expected to be a card that would sell out the Theater at Madison Square Garden, MSG’s 5,000-seat adjunct arena, with WBA 175-pound beltholder Dmitry Bivol facing Sullivan Barrera in the undercard, will probably draw about 4,000 fans, tops.

And the bulk of the media coverage in the all-important days leading up to the fight has almost exclusively been trained on Wilder and Ortiz.

“The way it may work out is that a lot of people may stay home and try to watch both fights on TV,” said Kathy Duva of Main Events, which is promoting Kovalev-Mikhalkin.

That became a more likely proposition last week when middleweight Hugo Centeno Jr. suffered a rib injury, forcing him to pull out of a scheduled bout with Jermall Charlo, which would have been the middle fight of a three-bout Showtime telecast.

Now, with Showtime coming on at 9 p.m. and down to two televised fights – super middleweight Andre Dirrell opens the show in a 12-round rematch against Jose Uzcategui, followed by Wilder-Ortiz – and HBO coming on the air at 10 with Bivol-Barrera, it may well be possible for stay-at-homes to catch both main events without interruption.

Although there has been a history of programming and counter-programming on the same night by HBO and Showtime, in an attempt to steal a share of one another’s audience, this confluence of events seems more likely to have been sparked by the growing rivalry between MSG and Barclays, which, since its opening in 2012, has made a frontal assault on the Garden’s reputation as the Mecca of Boxing.

But this is the first time the two have ever gone head-to-head, a sign not only of the fierce competition between the two but also the sudden desirability of boxing events by both buildings, following a resurgent 2017 for the sport.

There’s also the issue of availability; both venues also house NBA and NHL teams and, for the remainder of March, each is hosting a college basketball tournament that will eat up a pair of Saturday night dates.

Still, Barclays has an opening on Saturday, March 31, but chose to go up against Kovalev-Mikhalkin on March 3.

“This simply comes down to both buildings being aggressive about boxing, which is great for the sport,” said a network executive involved with one of the events, “and neither wanted to back down.”

In a way, this detracts from what should be an important night for Kovalev, who, since losing a controversial decision to Ward in their first bout and being stopped in their rematch last June, has since shed trainer John David Jackson in favor of Arbror Tursunpulatov and, according to Duva, has forsaken the between-fights partying that has made his training torturous in recent years. Kovalev will turn 35 in April.

“It was the lesson of my life,’’ Kovalev (31-2-1, 27 knockouts) said, “but what happened has made me better and it’s in the past. I understand for myself, the main thing that I should do is maintain my body and my boxing career.”

Kovalev, a notorious control freak – Duva said he is as stubborn and set in his ways as Evander Holyfield was when he fought for Main Events – says he has given over control of his training to Tursunpulatov, who trained the Russian amateur team. Kovalev returned to the ring last November with a second round TKO over Vyachaeslav Shabranskyy, a fight that suddenly became a title bout when unified titleholder Ward announced his retirement.

That, too, was at the Theater and Duva said the plan was for Kovalev to cultivate New York’s sizable Russian community in the hopes of eventually fighting in the main arena, perhaps against fellow Russian Bivol in a unification bout. Kovalev might also fight a mandatory against Staten Island’s Marcus Browne or perhaps Badou Jack, if Jack defeats WBC titileholder Adonis Stevenson in May. Either of those fights is also likely to land in New York.

But first Kovalev must get past Mikhalkin, an awkward but light-hitting (only 9 KOs in 21 wins) southpaw, who beat Bivol as an amateur.

“The fight will be very interesting,” Kovalev said. I haven’t fought a southpaw in a long time. Maybe it will be uncomfortable a little bit and, maybe (Miklhalkin’)s whole life, he has been waiting for this moment. He’s very motivated because he’s never fought for a world title before.”

Nor has New York City ever hosted a pair of world title cards in two different venues, so close together, on the same night.

But even though it’s unprecedented, with boxing on the rebound and two arenas fighting each other for every last dollar from every last fight fan, don’t bet against it ever happening again.