Deontay Wilder out to silence the doubters in heavyweight title defense vs. Luis Ortiz 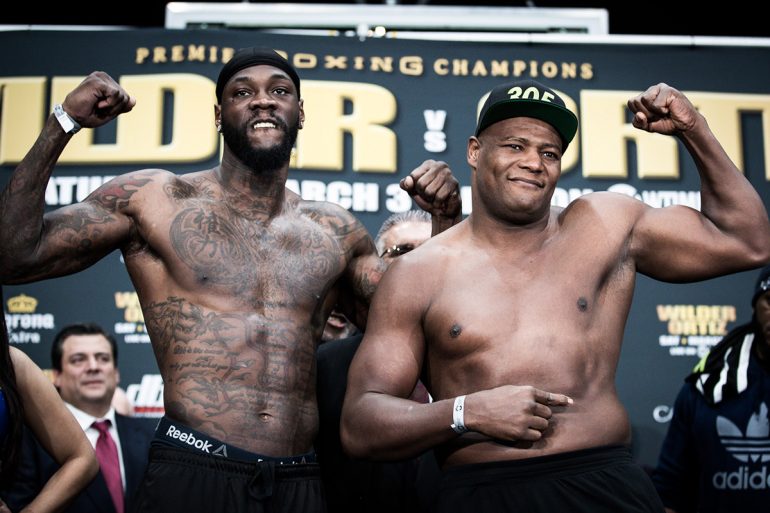 LOS ANGELES — Deontay Wilder hears the doubters with every ping on his phone, every notification that another Twitter troll has something to say about his game.

He’s too sloppy with his punches, they cry. He has a glass chin. He’s hasn’t faced anyone.

The big man has long strived to eliminate that last criticism. Wilder signed to fight Alexander Povetkin in 2016, with the fight to be held in Russia, no less. Before they could step in the ring, Povetkin tested positive for the banned substance meldonium.

Ortiz represented another opportunity for Wilder to prove his mettle.

After all, Ortiz (28-0, 24 knockouts) has long been considered the division’s boogeyman, a man whose tremendous boxing skills and power don’t quite meet the reward beating him would bring. But months before they were scheduled to duke it out, Ortiz tested positive for banned substances, another tantalizing matchup fallen by the wayside for Wilder.

Wilder (39-0, 38 KOs) ended up scoring a first-round knockout of Bermane Stiverne, the only man who had gone the distance with the Olympic bronze medalist, and now, the Ortiz fight is upon us once again.

Still, despite Wilder’s obvious willingness to fight the best, despite the awesome power he brings, respect eludes him. Really, it isn’t fair. Wilder has been nothing but a great ambassador for the sport, a charitable man who is a willing — and charismatic — media subject.

Even if the 32-year-old beats Ortiz on Saturday in the Showtime main event, Wilder won’t receive the proper respect. There are already pundits and fans saying the fix is in, despite no evidence to the contrary.

“Some of the people still doubt me to this day,” Wilder, THE RING’s No. 2 heavyweight, told RingTV.com following a workout last month. “And I want to show them. For me, there’s no greater feeling than proving people wrong.

“They just don’t understand what they’re seeing. ‘How the fuck is he doing what he’s doing?’ So now they have to label [my opponents] as bums and shit like that, but they would never walk that green mile to get in this ring.

“They would never step in this ring and do what we fighters do – put our life on the line. So many people, ‘Oh, I paid my money.’ But you’re way up in the nosebleed seats.”

Nosebleed seats or not, Wilder is loathed by many a boxing fan. Perhaps the only way he can shed the haters is to topple Anthony Joshua in a genuine heavyweight championship super fight. First, though, Wilder needs to find his way to that mountaintop.

And there won’t be any massive Joshua fight if he can’t dispose of Ortiz, easily the best opponent Wilder will have faced. Sure, Ortiz is 38 and a plodder, but he possesses terrific power and an impressive amateur pedigree in the Cuban school of boxing.

“The reason I wanted this fight is not only do I think Ortiz is one of the best technical fighters in the division, but he’s the boogeyman that everyone is running from,” Wilder said. “Champions have avoided him and I’ve always said I was the best and this is my chance to prove it.

The Alabaman will need to keep Ortiz at the end of his jab and use his superior athleticism to outmaneuver his foe laterally while connecting on his power shots. If he can hand Ortiz his first career loss, and finish the fight with the title challenger on his back, Wilder will be sitting pretty for the one thing he really wants; the one thing boxing really needs.

A heavyweight event the likes we haven’t seen in almost 20 years.

“I want [Joshua] just as bad as everybody else wants him,” Wilder said. “If it was up to me, we would’ve been fighting two years ago. I’ve been calling this man out.

The missing begins in earnest Saturday.