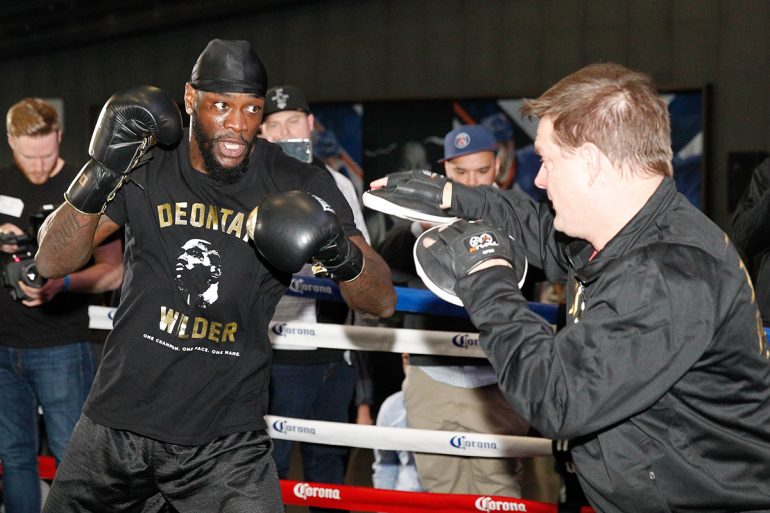 WBC heavyweight titlist Deontay Wilder has a new favored phrase he likes to toss out there: “Speak it, believe it, receive it.”

He stated this emphatically during a Thursday press conference and told the assembled media at the Manhattan venue, the Edison Ballroom, that he is quite keen on gaining another KO win.

“Bomb squad!” he bellowed, noting that every man he’s gloved up against, he’s stopped before the final bell.

The atmosphere was chill but the 32-year-old Wilder and Cuban strongman Luis Ortiz jawed back and forth during a closing Q&A.

Nothing boiled over, however, as the Alabaman projected an air of calm, cool and directed intensity. Ortiz, age 38, looked super-relaxed and one watcher of the Showtime stream cracked that he looked off, being he wasn’t using his preferred blood pressure meds. Yes, Ortiz’s PED history came up but not excessively. He maintained that he’d been flagged only because his BP meds had contained diuretics and that he was clean as anything. An online conspiracy theory that his left hand was maybe swollen was rebuffed, when he took off the black gloves he was wearing – circulation issues perhaps? – and waved both his hands, wiggled them, showing his hand fitness.

Maybe the most interesting visual element of the event was the staring contest between the titleholder and the challenger at the face-off. They looked deep into each other’s eyes, looking for uncertainty, and wouldn’t avert their gaze when prompted by various persons. Finally after what seemed an eternity, Ortiz looked toward photogs down front, as Wilder whispered unsweet nothings to the Florida resident. Ortiz blinked…

Other hitters looked to prime the pump for the card. Alicia Napoleon was composed, cool and articulate in promising that female fighters are here for the duration and that she will look to convince doubters on site, when she tangos with Femke Hermans for the vacant WBA female super middleweight title at Brooklyn’s Barclays Center. Andre Dirrell won for “Best Voice,” when he broke into some Sam Cooke during his back-and-forth with 168-pound rival Jose Uzcategui. Dirrell told us that, no, he can’t pretend to know Virgil Hunter but that tutor’s methods have improved him and he expects to prove it in the next two years. He has a full tank in reserve. “I believe this will be the worst opportunity of Jose’s life,” he said, throwing out the event’s best line. Uzcategui came off as unruffled and charming; he said he will show boxing prowess but, more so, a power edge in Brooklyn. Their fight starts soon after the 9 p.m. Showtime on-air start.

Promoter Lou DiBella reiterated that this scrap didn’t have to happen, that Wilder demanded this risky waltz. After all, if Ortiz beats Wilder, Wilder sees a massive pile of loot go up in flames, with a beef against IBF/WBA titlist Anthony Joshua falling to the wayside.

Wilder made sure to show his human side, giving props to Ortiz the family man, and he said he appreciates a dad working to give his kids a good brand of bread on the table. But then, a switch back…He reminded us all that he very much enjoys hitting people and seeing them hit the ground, in turn. A reminder that, yes, this isn’t the fight game. This Sweet Science is more often savage than sweet and most are expecting that element will be front and center in the main event, Saturday on Showtime.