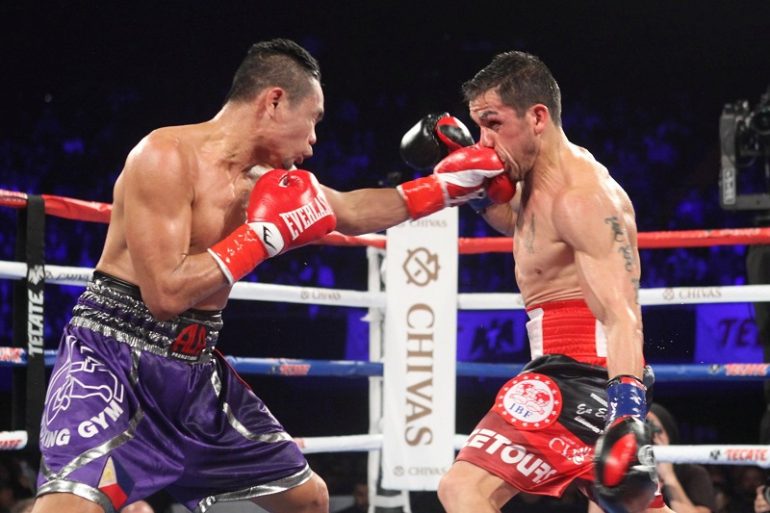 It only took Donnie Nietes 15 years to become an overnight success.

In reality, his HBO debut last Saturday was the culmination of so many nights trading punches in ballrooms in Cebu and mostly empty arenas in Manila, climbing the scales on channels only available in the U.S. on the most inclusive cable packages. He had to be so good for so long that his opportunity would come around and when it did, he made the most of it.

It wasn’t just that he beat Juan Carlos Reveco, a former two-time flyweight titleholder; it was how he did it. After a tactical start, Nietes silenced the boo birds at The Forum with a straight right to the chin that had Reveco stumbling back to his corner at the end of the sixth. Less than a minute into the following round, Reveco’s corner threw in the towel after he hit the canvas.

HBO’s willingness to showcase the lighter weights through its “SuperFly” broadcasts (at a time when Premier Boxing Champions has spread its fighters across several networks and Top Rank is becoming ESPN-centric) was the opening Nietes (41-1-4, 23 knockouts) had waited for, after other Asian junior bantamweights like WBO titlist Naoya Inoue and THE RING Magazine/WBC champion Srisaket Sor Rungvisai got theirs on the same platform.

Not bad for a guy who started as the ALA Gym’s janitor and then became its first champion.

He’s just the third Filipino boxer to win titles in at least three divisions and hasn’t lost since George W. Bush first presidential term. Being validated by an appearance on HBO greatly enhances his credentials and visibility for future Hall of Fame consideration and another big win or two should put him clearly over the top. 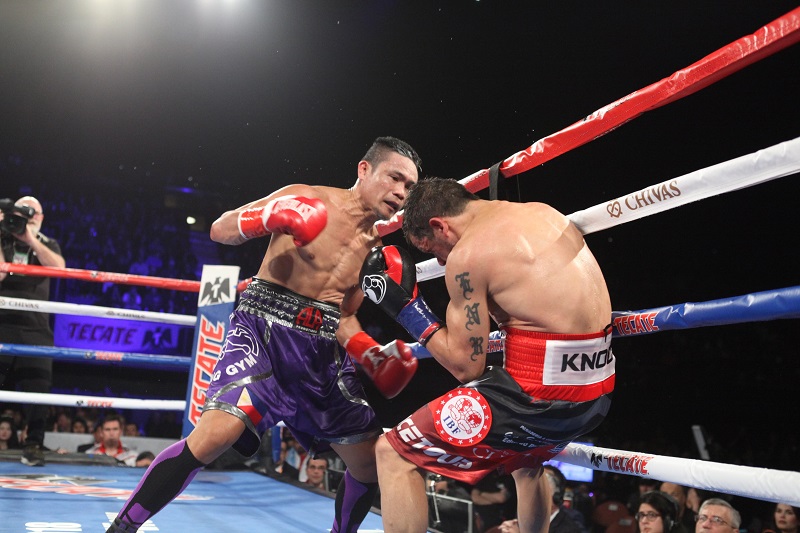 At age 35, Nietes has no time to waste but is at least in a better position to make the fights he couldn’t have previously willed into fruition. Here are five options for meaningful bouts at 112 and 115 pounds that “Ahas” may want to consider.

Daigo Higa – Higa would be the most compelling fight for Nietes if he decides to stay at 112 pounds. The latest sensation out of Japan, which is having its golden era in the sport at the moment, is a pugnacious, aggressive banger and has won all 15 of his bouts so far by knockout. He won the WBC flyweight belt last May with a sixth round stoppage of Juan Hernandez Navarrete and has made two defenses since, including a first round body shot knockout of former Nietes rival Moises Fuentes earlier this month.

Their styles would mesh for an exciting fight, and, with the IBF belt holder Nietes rated No. 1 and Higa No. 2 by THE RING at 112 pounds, they could establish a lineal championship. Higa was in attendance at The Forum last week and perhaps also might be seeing his pathway to U.S. audiences through this match-up. Would the 22-year-old Higa overwhelm Nietes or would Nietes teach him a lesson with his experience? Would be worth finding out.

Roman Gonzalez – This is a pairing I had first written about at the beginning of this decade, when both were champions at 105 pounds and had fought on the same card in Mexico. With 115 looking like it was a step too far up the scales for Gonzalez after two losses to Sor Rungvisai, fighting another veteran from the lower weights like Nietes would seem like an attractive way for Gonzalez to get back into the scene.

Reports out of Nicaragua have suggested that Gonzalez could try to contend for the WBO title that Inoue is expected to vacate for a move up to bantamweight, and he’d like to make the fight against Nietes. “If Donnie moves up, he’s one of the great champions of the WBO, hopefully they can rank Donnie so he can fight for the vacant title,” said Nietes’ promoter Michael Aldeguer. Two issues remain to be resolved however: Nietes’ people want the fight in a neutral location (the U.S.) and not in Nicaragua and the injured Rex Tso and Aston Palicte are currently rated Nos. 1 and 2 respectively by the WBO at 115 pounds.

Srisaket Sor Rungvisai – Facing THE RING junior bantamweight champion would be the most audacious move Nietes could make if he jumps directly to 115 pounds. Sor Rungvisai is a strong, hard-punching southpaw who made his name with two victories over Gonzalez and a win over Juan Francisco Estrada in the SuperFly 2 main event. Nietes would be the more compact puncher and Sor Rungvisai isn’t Meldrick Taylor with the hand and foot speed but “Chocolatito” would tell you about what the Thai can do with a single shot.

Nietes hasn’t had to face many lefties in his career and could find, like Estrada did, that punches that would slow fighters in the lower weights don’t have nearly the effect on Sor Rungvisai. Nietes would probably prefer a fight or two to feel out the division, which would be a wise approach, bringing us to our next two names…

Juan Francisco Estrada – For a time, Estrada was high on Nietes’ most wanted list, when he held the unified WBA and WBO belts. Nietes didn’t make his move into the 112-pound division until Estrada had vacated to move up. Facing Estrada as a sort-of eliminator for a clash with Sor Rungvisai would be ambitious but posing opposite a fellow patient counterpuncher could make for difficult viewing. Estrada could angle to go straight to a rematch with Sor Rungvisai and, after their thrilling 12th round last Saturday, fans wouldn’t mind seeing it again.

McWilliams Arroyo – Arroyo came in as the B-side and got a well-earned decision win over Carlos Cuadras in the fight following Nietes-Reveco on the SuperFly 2 card. A 2008 Olympian representing Puerto Rico, the 32-year-old hung tough with Chocolatito Gonzalez and Amnat Ruenroeng in title fight losses but had the focus and discipline to wade through Cuadras’ early thunder to earn the decision.

Arroyo holds the WBC’s “silver” belt, which could make him a quality step forward if the end goal is a fight against Sor Rungvisai. Truth be told, Arroyo deserves another TV fight after pulling off the upset over Cuadras.