Danny Roman gets ready for Ryo Matsumoto on Wednesday 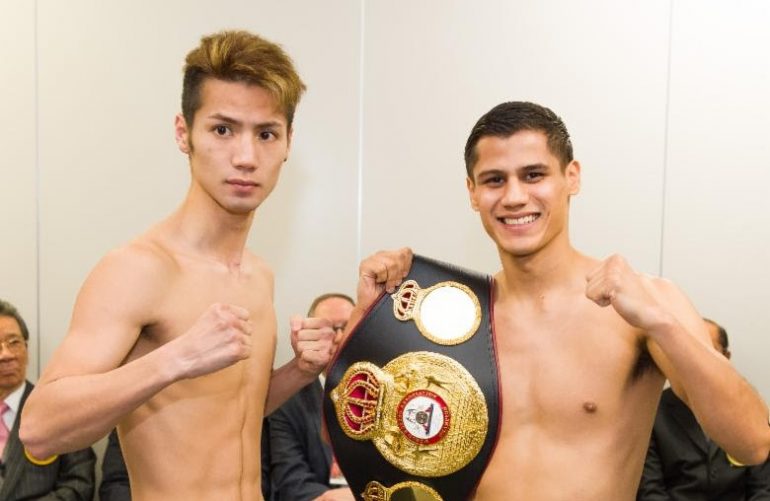 After losing a hard-fought unanimous decision to Juan Reyes on October 18, 2013, Danny Roman went back to his dressing room and wondered whether the loss would prevent him from ever fighting for – and winning – a world title belt.

More than four years later, and after scoring impressive victories, Roman can say he has done both. Now he will be defending his WBA junior featherweight title for the first time.

Roman will face Ryo Matsumoto, Wednesday night, at the Korakuen Hall in Tokyo, Japan. At Tuesday afternoon’s weigh-in, Roman tipped the scale at 121.3 pounds, while Matsumoto weighed in at 122 pounds.

The 27-year-old Roman (23-2-1, 9 knockouts) won the title in his most recent bout on September 3, stopping previously-unbeaten Shun Kubo in the ninth round. The victory also marked 15 consecutive victories for the Los Angeles-area resident.

After a lengthy winning streak, Roman is not worried about that being broken against Matsumoto or any other fighter.

“No pressure at all on my side,” Roman told RingTV.com in an interview Monday morning. “I’m just looking forward to keeping my winning streak.”

The hard-hitting Matsumoto (21-1, 19 KOs), who resides in nearby Yokohama, is ranked No. 11 by the WBA. He has won his last four bouts since being stopped by veteran Victor Lopez in May of 2016.

Matsumoto would avenge that loss almost eight months later, stopping Lopez in the sixth round.

The 24-year-old Matsumoto does have a four-inch height advantage but Roman acknowledges Matsumoto’s others strengths and advantages.

“Matsumoto’s strengths are his right hand and his reach advantage,” said Roman, who is trained and managed by Eddie Gonzalez. “His weakness is his defense. He has the tendency to throw wide punches and stay open for counters.”

“The preparation for this fight has been the same as the other fights. The only difference is the strategy for Ryo Matsumoto.”

Roman has enjoyed the journey from unknown prospect to contender to finally realizing his dream of being a majot titleholder. Roman would not be enjoying his current situation without the training and work he has put in and Thompson Boxing Promotions, which promotes him.

Thompson Boxing has guided the careers of Josesito Lopez, Timothy Bradley, Yonnhy Perez and Carlos Carlson. Now Roman is the latest high-profile fighter for Thompson Boxing, which is led by promoter Ken Thompson and matchmaker Alex Camponovo, who promote fight cards from the Los Angeles suburbs of Ontario and Corona.

“I’m very grateful to have Thompson Boxing Promotions on my side and I want to represent them well. They gave me the opportunity and believed in me when the other promoters did not want to work with me.”

Roman will likely get more higher-profile fights, especially in the United States, should he be victorious against Matsumoto. He has improved and may not have hit his ceiling yet, in terms of development.

The opportunities and potential are endless for Roman, who could hold onto his title for many years to come.

“As far as my development is concerned, it means a great deal. I had to work hard for this opportunity, while other prospects or contenders receive (those opportunities) so easily.”