The past seven months have been like a roller coaster ride for junior welterweight contender Josh Taylor.

In July, the exciting Scottish southpaw outmaneuvered and outclassed bitter rival Ohara Davies, stopping the previously unbeaten contender in seven rounds. It was the type of virtuoso performance that sends shock waves through the sport and there was no denying the Edinburgh man’s class.

Four months later, Taylor, who is rated No. 8 by THE RING at 140 pounds, posted another quality result. Miguel Vazquez was a former IBF lightweight titleholder who had never been stopped in a 44-fight career. The Mexican technician was competitive, but one single right hook to the body put him down for the count in the ninth.

“I thought it was a nice strong performance,” said Taylor before critiquing his 11th straight victory. “There were a few things I could have done better. I lost concentration at times because I didn’t respect Vazquez’s power. He caught me with a few silly shots.

This Saturday, Taylor (11-0, 10 knockouts) was scheduled to face former two-weight world titleholder Humberto Soto at the SSE Hydro in Glasgow, Scotland. However, the Mexican veteran sustained a serious eye cut in sparring last week and was forced to withdraw.

Cyclone Promotions didn’t have much time to seek out a new opponent, but they finally settled on Nicaraguan southpaw Winston Campos (30-3-5, 18 KOs). As well know, late replacements can be a distraction. On Saturday past, Callum Smith struggled to locate his A-game and labored his way to a points victory over six-day substitute Nieky Holzken.

“The change has had no effect on me whatsoever,” insisted Taylor. “I couldn’t get the proper sparring for Soto because he’s a lot smaller than me. There weren’t too many people keen to spar who were shorter, so I’ve been sparring the likes of (welterweight prospect) Chris Kongo and other fighters who are the same size or taller.

“In a funny way, the switch has probably worked in my favor, although I’ve not had any southpaw sparring in this camp. I’m not bothered, though. I’ll just go in and take my time for the first couple of rounds. I’ll adapt accordingly. I’m comfortable against southpaws, because I can get my jab off through the middle. I won’t have to go over the top of his front hand, or get inside his front hand and work angles. It’s going to be easy to get my jab going.”

The 27-year-old Taylor does have an adaptable and sophisticated style. Even at this early stage in his career, we’ve seen the former amateur star improvise according to what’s in front of him. He can box off the back foot. He can attack without mercy. He can put his punches together well. And, as we seen against Vazquez, he can end a contest with one punch.

The quality Taylor has shown to this point has many fans desperate to see him fight for a world title. The affable Scotsman is also eager to take the next step but, with so much going on at 140 pounds, Taylor wants to see how the land lies when Terence Crawford’s former belt collection finds a home.

“There’s obviously a plan in place for me to become world champion, but we need to make a decision on what way that will come,” said Taylor. “The belts were all vacant and now there’s some title fights coming up. There’s going to be mandatory fights scheduled in the future and I’ll be sliding up the rankings. Opportunities are going to come up and we’ll see what happens.

“The main thing is a Josh Taylor win on Saturday. I’m not too sure how it’s going to go, because I don’t really know anything about this guy.”

Taylor kindly agreed to offer his take on three junior welterweight title bouts that are scheduled between now and April: 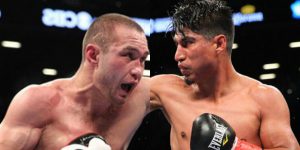 “Garcia is really good and he’s looked like a bit of a monster since his comeback. But I think Lipinets could give him a few problems with his sharpness. He creates angles and he’s got some quickness. I just think Garcia will be too strong for him. It’ll be a highly-skilled matchup, but I see Garcia catching up with him in the later rounds and landing the more telling shots. We’ll need to wait and see, but I’ll be watching it with interest.” 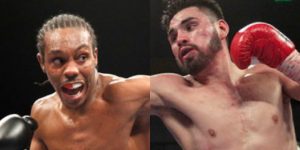 “I’ve seen Ramirez before. He was in the same weight class as me at the (2012) London Olympics. He’s a good fighter with good skills, fast hands, a good left hook and he’s quite aggressive. I’ve not seen much of Iman, maybe one fight, and going off that I would favor Ramirez to win. I’ve got an eye on all these fights because they’re potential future opponents.” 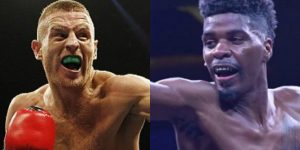 “I don’t know a lot about Hooker. I think Terry is stepping up because he’s been struggling at lightweight, although I’m not too sure. Terry’s a good fighter; punches in punches, throws good fast combinations. I’m looking forward to watching that and, if he wins, I’ll be looking to get a fight with him down the line as well. There’s some decent fights lining up for me and it’s going to be an exciting 12-18 months in this division.”

THE BOUT WILL BE SCREENED LIVE AND EXCLUSIVE ON CHANNEL 5 IN THE U.K.