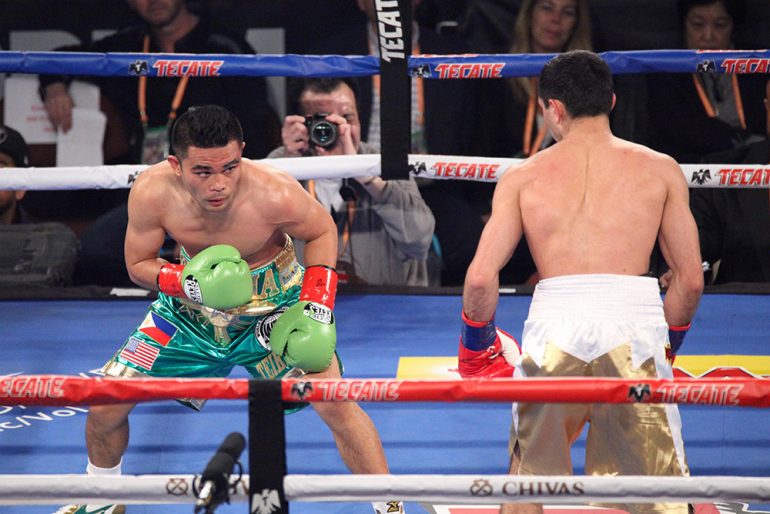 Brian Viloria and his team will take time after his disappointing loss before considering whether to proceed with his career or retire.

Viloria lost a lopsided decision to previously unknown Artem Dalakian for the vacant WBA flyweight title on Saturday at The Forum in Inglewood, California, just before the SuperFly2 broadcast began on HBO. It was Viloria’s sixth loss against 38 victories (23 by knockout), and ended with Viloria covered in blood following an elbow to his forehead in the 11th round.

“Brian deserves time to rest and be with his family following a gallant, brave effort. In the coming weeks, we’ll put our heads together and make decisions in the calm of objective analysis.”

Text messages to Viloria were not returned by the time of this story’s publication.

Viloria, 37, of Waipahu, Hawaii, has been a professional since 2001 following a stint at the 2000 Olympics. He won two titles at 108 pounds and then moved up to flyweight, where he unified the WBO with the WBA title in 2012, the first time the division had been unified since 1965.

His victories include knockouts of Eric Ortiz, Ulises Solis and Hernan Marquez in a career that sprinkled in losses to Roman “Chocolatito” Gonzalez, Carlos Tamara and Omar Nino (the latter of which he later avenged in 2012).

Though he’d never been showcased on an HBO broadcast, the commentators paid tribute to him during the opening fight between Donnie Nietes and Juan Carlos Reveco.

“Viloria has had an excellent career, and a bit of a hard luck one, a popular fighter when he turned pro, an Olympian, an offensive fighter, a crowd pleaser, a good personality,” said Max Kellerman. “Didn’t become a dominant champion but would have been an excellent fighter as he has been in any era.

“A great, great person,” added Andre Ward, a statement which Gittelsohn would agree with.

“I feel proud and privileged to be associated with a man of Brian’s talent, character and accomplishment. He’s a credit to the sport, and I have the deepest admiration for him,” said Gittelsohn.

If it was Viloria’s final trip between the ropes, he goes out bloodied, but unbowed.