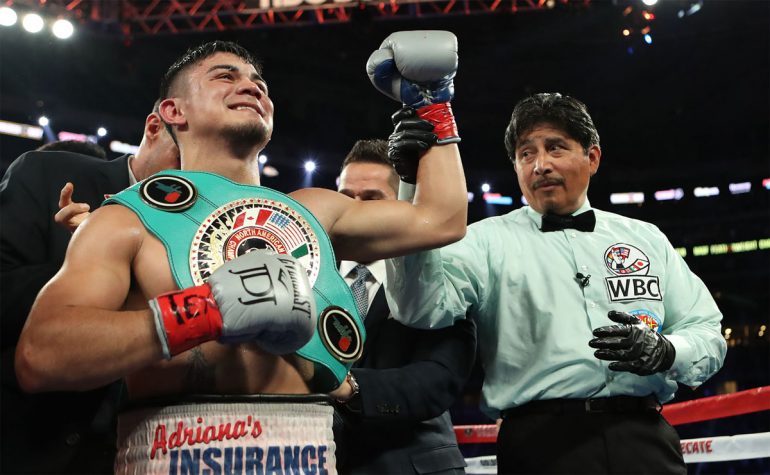 Joseph Diaz Jr. is waiting for his mandatory title shot against WBC featherweight titleholder Gary Russell Jr., but he isn’t doing so idly.

While Russell remains on the sideline, Diaz keeps fighting and did so again Thursday with a third-round knockout of former titleholder Victor Terrazas in the main event of Golden Boy Boxing on ESPN in Fantasy Springs, California.

The stoppage was Diaz’s first in five outings, a powerful left hand to the body that dropped Terrazas to his knees while referee Eddie Hernandez counted 10 as Round 3 expired.

“I already knew I had the power in me, I just never showcased it, I wanted to be technically sound.” said Diaz, THE RING’s No. 7-rated 126-pounder. “This fight, I really wanted to bring out the power so I could show everybody I can take someone out.”

Diaz (26-0, 14 knockouts) showed off his power from the opening bell. The 25-year-old Olympian dropped Terrazas with a digging left to the midsection, and then later did so with another left, this time upstairs, for a second Round 1 knockdown.

It was no surprise given the 35-year-old Mexican’s recent performances. Terrazas (38-5-2, 21 KOs) narrowly outpoined Cristian Mijares in 2013, but later in 2013, he was stopped in three rounds by Leo Santa Cruz. It would be about three years until Terrazas would fight again, and he barely escaped with an eight-round decision over journeyman Cristian Arrazola.

The following fight, he was knocked out again, this time by Eduardo Hernandez. Sure, Diaz was simply staying busy, but he looked good, and now he’s ready for a far bigger assignment.