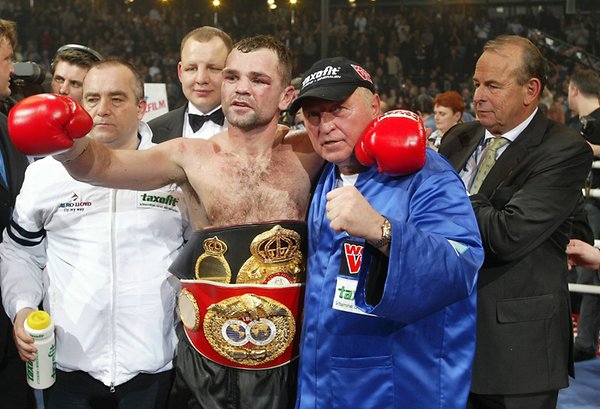 Sven Ottke was a highly decorated amateur who went on to become the unified super middleweight titleholder in the late 1990s-early 2000s.

Ottke was born in Spandau, on the outskirts of Berlin, Germany on June 3, 1967. His early years passed without incident. He liked to be active, be outside, explore and play soccer. At 14 years old, he was invited by his best friend to join him at Spandauer boxing club.

“Mark Stefan was a smart guy, so I didn’t think he’d box. He was slim but taller than me. He was also more a technician than puncher,” said Ottke in an interview with RingTV.com. “Mark was just a nice guy. When he asked me if I wanted to box, I didn’t understand.

“I had to talk to my mother and she was skeptical. I wasn’t listening to anybody. I was doing what I wanted. Mark’s father came to my house to try to explain to my mother, so I could go to training. My mum was good with it because after a short time I was successful. That made it easier for me to box.”

In early 1982, Ottke entered the amateur ranks. By the end of that year he had won his first tournament and was progressing quickly.

“In 1983, I became Berlin champion, North German champion and third in the German Nationals,” recalled Ottke, before voicing displeasure. “They cheated me. I would have become champion, but I was fighting a national team member. It doesn’t matter now. I already forgot it. The next year I won all three. In 1985, I became the champion in the men’s category.”

Ottke served two apprenticeships; one as a plasterer and the other as an industrial clerk before focusing on boxing.

A highly proficient technician, Ottke went on to represent Germany at three consecutive Olympic games. He reached the quarter-finals in Seoul 1988 and Barcelona 1992, losing out to the eventual gold medalist, Ariel Hernandez, in 1992 and again at Atlanta 1996. Ottke also captured two European golds and a bronze at the World Championships.

“It wasn’t my plan to go to the pros,” he explained. “My goal was to win the Olympics, but I failed. I was focused on the Olympics.

“In 1996, (famed boxing coach) Ulli Wegner went to the pros. He took Markus Beyer with him, and then talks began about professional boxing. Negotiations started with [Universum’s Klaus Peter] Kohl and [Sauerland Events Wilfried] Sauerland. Ulli was with Sauerland, so I chose them. Of course, I never regret that I turned pro.”

Ottke departed the amateur scene with a record of 256-47-5 and made his professional debut in March 1997. He won 12 straight bouts, over the course of 19 months, before his promoter secured a matchup against IBF 168-pound holder Charles Brewer.

The light-hitting German was able to edge the American by close, and controversial, split decision.

Over the next couple of years, “The Phantom” became the most active champion in boxing. He bested the likes of respected American Thomas Tate (TD 11 and UD 12), future IBF light heavyweight belt holder Glen Johnson (SD 12) and Brewer (SD 12) in a rematch.

In the middle of his reign, Ottke met the brash talking Anthony Mundine in December 2001. The unknown Australian was better than expected and gave Ottke all he could handle through nine rounds. Although Ottke was never known as a puncher, he required the knockout in this fight and got in the 10th.

By March 2003, Ottke had made 16 title defenses when Sauerland Events secured a unification fight against heavy-handed WBA titleholder Byron Mitchell.

“The unification of the WBA and IBF titles in Berlin in front of 10,000 people (is my proudest moment),” said Ottke. “That was the highlight of my career. I can truly say, I am proud of it.

“There was also the WBC title, but Marcus Beyer had it. He was my teammate and we both had the same trainer. It was impossible. How can you share the same trainer? Should he go one round with me and one round with him? [Laughs] It was like the situation with the Klitschkos. They wouldn’t (fight) for £100 million.”

In December 2003, Ottke outpointed Robin Reid in Nuremburg. Again, it was controversial, but the defending titleholder was given the benefit of the doubt on a unanimous decision: 115-113 twice and 117-112. The referee, Roger Tilleman, was heavily criticized for favoring the German, and even Ottke feels that one scorecard was dubious.

After winning a near shut-out decision against Armand Krajnc on March 23, 2004, Ottke (34-0, 6 knockouts) announced his retirement from boxing. He is one of the very few fighters to walk away undefeated. Ottke was a world titleholder for almost five-and-a-half years, making a division record 21 title defenses (shared with Joe Calzaghe).

“I wanted to retire in December 2003 because I was tired mentally. I was boxing in March, June, September and December, every three months, for seven years,” explained Ottke. “I could have had a break and came back, but I felt that was it.

“The last fight, against Krajnc, I only did as a gift to my trainer. I gave him a BMW. I told Ulli, ‘I love you. This is for the time you spent with me’ and gave it to him at the hotel in Magdeburg. We had a great night. Ulli was like my father. I haven’t spent so much intense time with anybody in the world as him. It was like father and son. I’m not an easy guy, but I listened to him.”

For much of Ottke’s title reign, Calzaghe was a rival titleholder with the WBO. Unfortunately, the two never settled matters in the ring.

“I don’t know why it never happened,” Ottke said. “That is not my job. It’s the manager’s job. It would be, for sure, a great task. I’m sure it would be a nice fight.

“I guess both management teams wanted to fight at home. They never came to a deal. I don’t even know if it’s about money. It just never happened. You would have to talk to Sauerland about it. Wilfried is the only one who knows.”

Ottke, now 50, is married and has three children.

“Now I am living my life,” he said. “I’m fit and I can do whatever I want. I’m not doing big things, but I get along. I bought a nice house and I’m doing good. I kept my money.

“I do a lot of jogging, cycling and weights. In summer time, I play golf and I enjoy it a lot. I do a lot of charity golf tournaments in Germany at Eagle Charity gold club. I train a female boxer, Nina Meiker, but it doesn’t take up lots of my time.”

Ottke graciously took time to speak to RingTV.com about the best he fought in 10 key categories.

BEST JAB
ANTHONY MUNDINE:
He was giving me the hardest time in the ring. We were very surprised by Mundine’s jab. We only had two or three fights of him and you couldn’t really tell that he had such a great jab. I had to find that out in the ring. He was much better than we thought.

BEST DEFENSE
MUNDINE:
It’s difficult to say because I was the defensive guy; everybody had to run after me [Laughs]. Mundine was unpredictable and fast. Until the KO it was a close fight. It was tough to hit him like I wanted to.

FASTEST HANDS
MUNDINE: It was a very difficult fight for me. Until the knockout it was an even fight.

BEST FOOTWORK
MUNDINE: Nobody was as fast as me. I fought lots of Americans and they aren’t that fast on their feet. Robin Reid told me in the ring to fight because he could not hit me. There was no special footwork with my opponents besides, again, Mundine.

BEST CHIN
CHARLES BREWER: It’s a very difficult question, because I’m not a hard puncher. I’m a technical boxer. I hit Brewer with all my power and he didn’t even flinch. It wasn’t my point to hit hard. My point was to move around and be fast.

SMARTEST
MUNDINE: He was a very smart boxer. It was like a chess match when we fought. It was close until the last punch.

STRONGEST
BREWER: Brewer was a naturally strong guy. You could tell from his physique.

BEST PUNCHER
THOMAS TATE: He was a strong boxer with power in his hands. I felt a lot of his punches, especially in our first fight. The second one was different.

BOXING SKILLS
MUNDINE: Mundine had great tactics; he was very fluid. He had a strong mind and a good fighting attitude.

BEST OVERALL
MUNDINE: It was my toughest fight in my whole career, until the knockout.