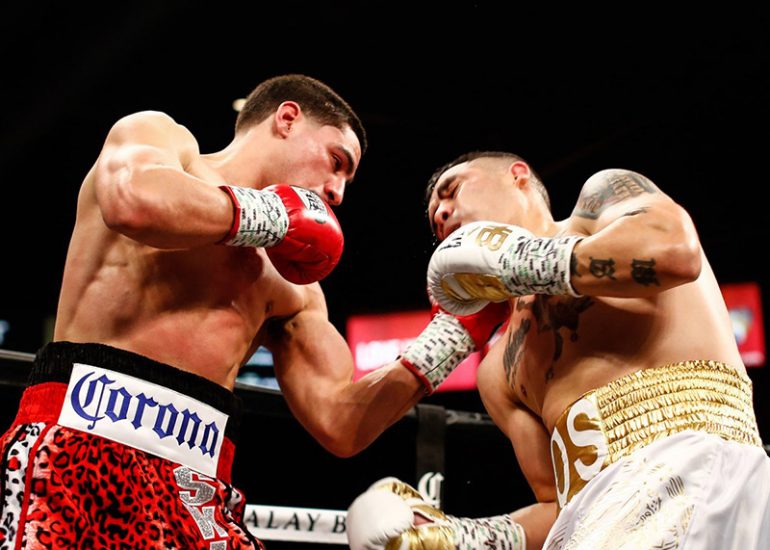 LAS VEGAS, Nevada — When the fight was announced, it appeared to be a grotesque mismatch between a young fighter still working into his prime and a shopworn brawler who had more heart than skill. But Brandon Rios gave Danny Garcia all he could handle for eight rounds before the former WBC welterweight titleholder’s devastating right cross crumbled “Bam Bam” to score a ninth-round TKO in a Showtime-televised main event at the Mandalay Bay Events Center.

Garcia (34-1, 20 knockouts) was stepping back into the ring for the first time since suffering the first loss of his career to Keith Thurman last March and parting ways with his WBC title. “Swift” entered the ring as a 20-1 favorite but Rios wasn’t here to be anybody’s pushover despite being on the wrong side of his career at 31.

It was evident from the opening bell that the Rios who put on devastating displays of power punching at lightweight was long gone. But Rios (34-4-1, 25 KOs) refused to lay down and pressed forward in an attempt to pressure Garcia into making a mistake while smothering any opportunity for “Swift” to land his vaunted left hook. 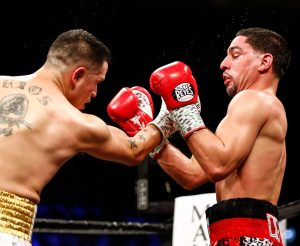 Rios lands an uppercut to Garcia. Photo by Stephanie Trapp-SHOWTIME

The strategy worked as Garcia had a hard time finding the Oxnard slugger early on while Rios managed to score some points and keep his Philly foe off balance. In the fourth round Garcia landed his left hook and began to find space to counter but it was clear that Rios was going to force him to fight every minute of every round.

To his credit, Garcia remained patient under the pressure and never found himself in too much danger despite a very pro-Rios crowd chanting his name and cheering every punch landed. In the fifth, Garcia landed a hard left hook but Rios walked right through it and clubbed Garcia with a right hand of his own as to suggest that he’s going to be here all night.

Rios had an excellent sixth round where it was clear that Garcia was taking the round off as he pounded on his opponent, who appeared to be committed to conserving his energy for a big finish.

Garcia did manage to rip a pair of hard hooks in the seventh round and began to time Rios’ advances and pick them off. But Rios continued to hang around and do everything in his power to make Garcia uncomfortable. 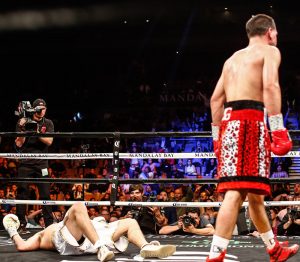 Somehow Rios got up from this knockdown but he was in condition to continue. Photo by Stephanie Trapp-SHOWTIME

But then a right hook — not the left that many thought would be the punch to end the night — landed squarely on Rios’ temple and sent him down in slow motion to the canvas. It was a punch that just about any other fighter would have been counted out for. But Rios rose to his feet as his heart was simply too big to stay on the canvas. Referee Kenny Bayless gave him every opportunity to collect himself but the punch did far too much damage and the fight was called off at the 2:25 mark.

It was a fun scrap that was more competitive than it had any business being. However, the real fireworks came afterward when Shawn Porter, who had a verbal exchange with Keith Thurman earlier in the night, entered the ring to challenge Garcia. It didn’t remain civil for long as the two yelled at each other and eventually there needed to be an intervention that would separate the two young former beltholders. It’s a fight that the boxing world would certainly like to see and could make for an entertaining evening of pugilism with their clash of styles.

But this was Danny Garcia’s night and the manner in which he dispatched of Brandon Rios is certain to makes its rounds on social media.

“I felt the ring rust a little bit in the beginning,” Garcia said of his near 12 months out of the ring. “He’s a good inside fighter and he was giving me some good uppercuts. I felt good, it was a good nine rounds. He came to fight. I came to box, I did that. I came to bang, and I gave the fans what they wanted – a knockout.”

With the 147-pound division becoming increasingly more crowded with talent, it will be interesting to see how the division is matched up moving forward. But Garcia certainly has a place at the table.