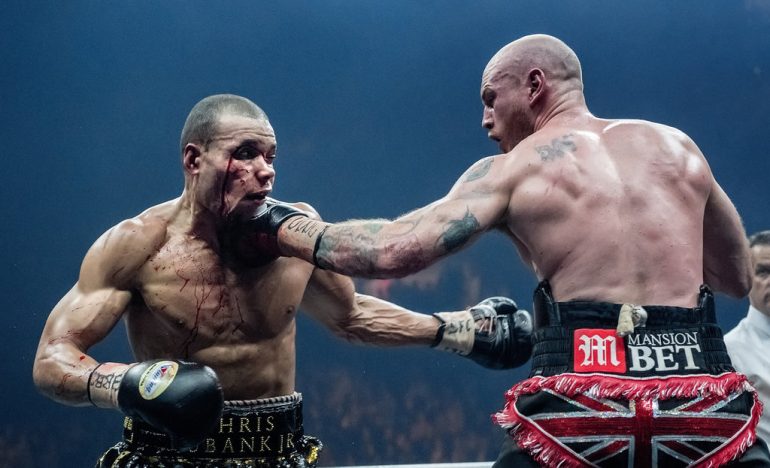 Groves walks Chris Eubank Jr. on to the jab. Photo by WBSS
17
Feb
by Tom Gray

MANCHESTER, England – Too big. Too experienced. Ultimately too good.

British star George Groves retained his WBA super middleweight belt and advanced to the final of the World Boxing Super Series tournament after posting a 12-round unanimous decision over countryman Chris Eubank Jr. at the Manchester Arena on Saturday. The official scores were 117-112, 116-112 and 115-113.

“The better man won on the night,” said Groves (28-3, 20 knockouts). “Credit to Junior for getting through 12 rounds, I didn’t think he would. Chris didn’t lie when he said he was going to grit it out. That was a terrific fight for the fans.”

Groves, who is rated No. 2 by THE RING at 168 pounds, boxed briskly behind his jab and rarely let Eubank get set. The 29-year-old Londoner executed his game plan perfectly, earning his victory with a professional and polished performance.

The atmosphere was at fever pitch during pre-fight pageantry and Eubank was booed incessantly. Groves, by contrast, was cheered soccer-style and responded to the fan affection by snapping his opponent’s head back with the jab in Round 1. It was the omnipresent weapon of Groves’ arsenal.

Eubank (26-2, 20 KOs) let his hands go in earnest for the first time in Round 2 and the crowd erupted, but Groves matched the attack and pushed his man backward. Again, it was a session that was decided by the lead hand and Groves was winning that battle with ease. Eubank looked uncomfortable and a deep cut around the right eye, sustained in Round 3, made matters worse.

Groves’ experience against bigger game was telling and the challenger’s signature raids were either smothered or they cut holes through the air. Eubank did put together a brace of sharp bursts in the fourth, but effective blows were few and far between. For the most part, Groves was defensively adept and out-boxing his man.

“I couldn’t see out of my right eye for most of the fight but a cut’s a cut and you have to deal with it,” said Eubank, THE RING’s No. 4 super middleweight. “George has got the heart of a true champion and did what he had to do. I thought I did enough in the later rounds to win it. But hopefully, we’ll get the rematch on.”

As the rounds progressed, Eubank’s desperation increased. He could score with a big single shot, but the jabs and right hands from Groves were more frequent. Both men had their moments at the end of the eighth and the action was fierce. Eubank just lacked the outside game to compete and struggled to find the range he could acquire against lesser men.

Two right hands hurt Eubank in the 10th and he swung from the heels in retaliation. The challenger was now being made to flounder and blood flowed freely from the eye cut. At this point, it was a complete pro against an incomplete pro and Groves’ slicker work was carrying the day.

The fight ended with Eubank going for homerun after homerun. The challenger had success, but it was too little too late and Groves responded well.

Groves has come through real fire to reach the top of the super middleweight column. The Englishman was stopped twice by domestic rival Carl Froch in 2013 and 2014, in IBF title fights, and a close points loss in 2015 to then-WBC beltholder Badou Jack was a crushing setback.

Groves finally reached the end of the rainbow when he halted Fedor Chudinov to win the vacant WBA title in May, but the Eubank triumph might have been even more satisfying.

The Chudinov victory exorcized a lot of demons, but that bout took place on the undercard of the Kell Brook-Errol Spence welterweight title fight and was almost completely overshadowed. Defeating Eubank on such a huge platform is a career-best victory for Groves and a defining moment.

Eubank will need to pick up the pieces. Just as was the case against Billy Joe Saunders, who defeated him on points in November 2014, the blazing hand speed and ambitious combinations weren’t enough. The 28-year-old boxer-puncher still has time to improve, but acknowledging that fact and hiring a full-time trainer would be the best starting point.

Groves is set to face the winner of the semifinal bout between Callum Smith and Juergen Braehmer, which takes place in Nuremberg, Germany, on February 24.

However, Groves will first have to recover from a suspected dislocated shoulder suffered during the bout.

“My shoulder feels pretty sore,” Groves said, “but I wasn’t going to let anything beat me tonight.”