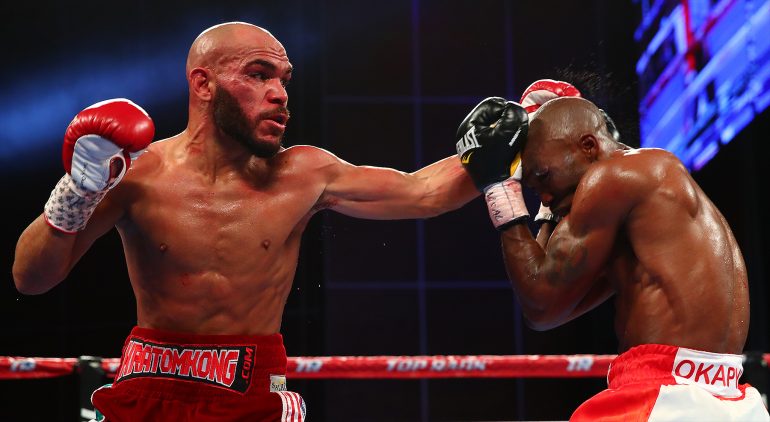 It was his fourth shot at a title, and it didn’t come easy — far from it — but finally, Ray Beltran can call himself champion.

He battled through a sea of blood, with two badly sliced eyelids and a game opponent who traveled all the way from Africa, but Beltran closed strong and edged Paulus Moses via unanimous decision in a hellacious fight that could have gone either way.

Two judges saw it wider, with tallies of 117-111 for Beltran, with the other judge turning in a 116-112 scorecard to crown Beltran the new WBO lightweight titleholder.

Beltran (40-4, 25 knockouts) picks up the belt vacated by Terry Flanagan, and with Jorge Linares-Vasyl Lomachenko talks all but dead, Bob Arum told RingTV.com on Thursday that the winner of the ESPN fight could face the Ukrainian on May 12 in New York. With serious cuts all over his face, it’s doubtful Beltran would be available then.

But none of that matters at the moment: Beltran has finally achieved his dream, one that seemed far-fetched during the days when he was only known as Manny Pacquiao’s chief sparring partner.

“I have no words. I gave everything I had,” said Beltran, THE RING’s No. 3 lightweight. “I really had to push myself. He is a very experienced and tough fighter.

“He surprised me with a couple of good punches, but right away I thought about my family and everything I have been throughout my career. I gave it my all. I made my career the tough way, and now I’m a champion.”

Beltran started strong, hungry to finally grab what he knows should have been his after he was robbed in Scotland in a 2013 draw with Ricky Burns. Beltran dropped Burns and broke his jaw, but it wasn’t enough. This time, he wouldn’t be denied.

The 36-year-old Mexican worked Moses’ body with power shots from the onset and applied steady pressure. Moses was happy to stand in the pocket and work on the inside, a strategy that began to pay dividends in the third. His sharp punches began to find their mark, all set up by his long, educated jab.

Moses (40-4, 25 KOs), at 39 years old, was making his U.S. debut and he fought with everything he had. The cut over Beltran’s left eye materialized in the third, the fourth time he’s been cut in his last five fights.

And Moses went right to work on it. When he boxed from the outside, he found success and he started to take control of the bout in the middle rounds.

He belted Beltran with overhand rights time and again, but Beltran timed it with a big counter right that wobbled the Namibia native in the fifth. Moses bounced right back with a devastating right uppercut that buckled Beltran’s legs, but he somehow kept his balance, and it was a wonder that neither his knees nor his gloves touched the canvas.

The former 135-pound titleholder’s best rounds came in the sixth and seventh, when Beltran’s activity dipped, and by that juncture, his right eye also was gashed. So, too, was his mouth, which was spilling blood, and it appeared he couldn’t see the shots coming.

Moses poured it on and buckled Beltran twice more in the eighth, but he never wavered. The durable fighter absorbed them and kept coming.

He found another reserve of energy and closed the show strong. In fact, he won all three final rounds on one card, and curiously the last six and seven on the other two cards.

And after the late rally, Beltran can now deservedly call himself champion after 12 brutal rounds. He finally did it.