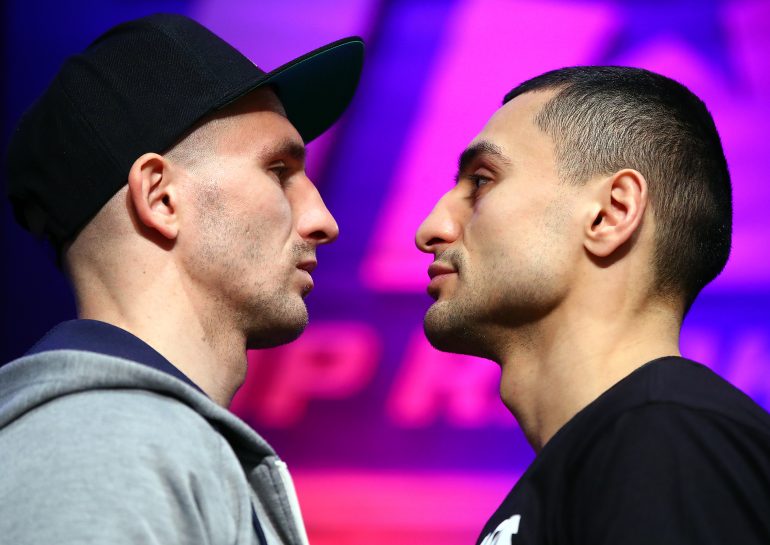 Since he made his pro debut five years ago, Top Rank has had high hopes for Egidijus Kavaliauskas.

But until now, the top prospect hasn’t been tested, insteading being carefully developed by Top Rank matchmaker Brad Goodman.

That all changes Friday as the company will see if “Mean Machine” is for real when he steps up against tough contender David Avanesyan in a 10-round bout on ESPN.

Kavaliauskas (18-0, 15 knockouts) has impressed with his punching power and aggressive style, but the 29-year-old Lithuanian has yet to face anyone with discernible talent. Avanesyan, who gave Lamont Peterson trouble last year, represents a quantum leap in competition.

“This is unquestionably my biggest fight taking on a former world champion like Avanesyan,” said Kavaliauskas, who’s guided by THE RING’s 2017 Manager of the Year, Egis Klimas. “I know very well this is a tough fight. I will go into the ring and fight with all of my will and heart to beat him.”

If Kavaliauskas comes out on top, Top Rank has big plans for him. The Las Vegas-based promotional firm works with Terence Crawford, who moves up to 147 pounds in April, as well as the great Manny Pacquiao and titleholder Jeff Horn.

They’ll need dance partners for those guys, with all of the other elite welterweights in Al Haymon’s stable. But first, Kavaliauskas has to prove he can hang.

“That’s a test for him,” Bob Arum told RingTV.com. “The guy he’s fighting is a very competent guy. We’ll see how he looks against him. He’s the toughest guy he’s fought. I’m not going to say this is the guy we’re looking to put in with Terence Crawford until I see him with this guy.

“I am very hopeful. He’s Egis’ fighter, Egis has a tremendous eye and he’s always been high on Kavaliauskas and so are our matchmakers.”

Avanesyan (23-2-1, 11 KOs) held the WBA’s secondary welterweight title, which THE RING doesn’t recognize, and he defended it with a decision over the badly faded Sugar Shane Mosley in 2016. But in his next fight, the 29-year-old Russian was edged by Peterson via decision in a rough-and-tumble fight.

“Kavaliauskas is a good fighter but he’s not ready for a fight like this,” said Avanesyan, who now resides in England. “I am a former world champion and he is stepping up to fight me.

“He’s got a good jab, some power but this fight is more important for me and not him. When I win It puts me in line for a shot at another world title. Let’s see if Kavaliauskas is ready for a fight like this. I don’t think he is.”