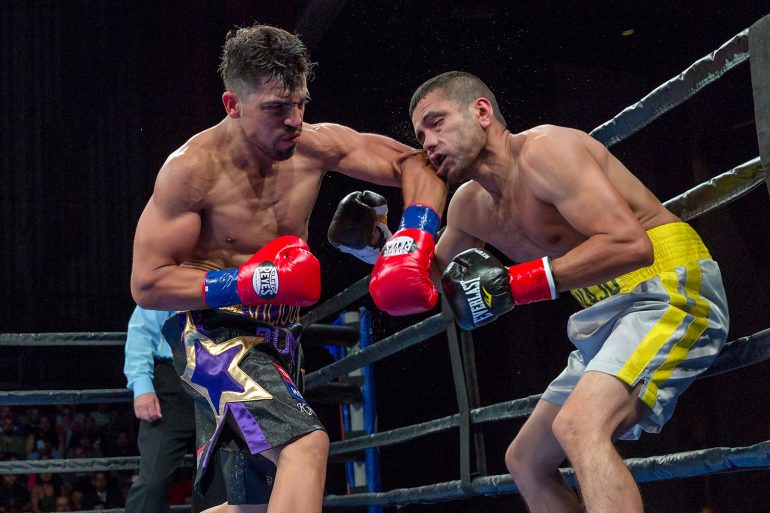 Surely the Saturday scrap between vets Victor Ortiz and Devon Alexander is a true crossroads fight.

Doesn’t the loser drop two steps backs, and have to be resigned to being in the “ex-champ who fights younger guns” category? And if the result is a conclusive one, in a bad way, if, say Ortiz gets dropped and stopped and ends up with a blank look on his face, his eyes unable to focus into lucidity, might that not be his last call?

That hasn’t been the main subject matter in the count-down to the tango, which will unfold on Fox, from Texas, on a PBC card. That’s understandable. After all, how much does a keyboard tapper want to go there…how much can you really be expected to poke and prod and query a fighter on whether this is his last chance? It’s a bit rude, when going over-board, in my view, because the question presupposes that you think it a very real possibility that the person you are talking to is going to get an L…and maybe in ugly fashion.

At the Thursday presser in Texas, Ortiz who was quite heralded back when, and had no shortage of backers loving his pop and his personality and his potential appeal to those oh so loyal Hispanic rooters, spoke of being confident…

“We’re ready to go once again. I’m here for what’s mine, and that’s a victory. Alexander is a nice fighter and I’m sure it’ll be a war.”

And he offered a slight hint into what MIGHT be lurking in that mind, one that belongs to someone who ain’t a young 31, someone with six losses, who might be one “kayoed by” away from maybe not fighting again…He spoke of needing to trust…

“The victory is the only thing on my mind. I’m here to defeat Devon Alexander. I just need to trust my training and I know it’ll give the result I want.”

The Cali.-based boxer, who is a bit of an internet sensation, something of a popular target for wiseguys taking aim at his acting aspirations, and his entries into out of the ring business forays, like cosmetics (see “Facelube”) is also a must watch type because he can crack.

“I’m definitely looking for the knockout. I want to put on a great performance for these fans. They’ve supported me throughout this promotion and I owe them something memorable.”

Yes, you bust on Ortiz for the Facelubery and such, but he’s telling you right now that there will damn well be drama in this fight, be it positive or negative…

“Devon and I have known each other for a long time, but that all goes out the window on fight night. It’s going to be a brawl. We’re going to do what we have to do to get this win and move on to the next step of my career.”

Is his middle initial D, for “drama?” Because there’s been no shortage..

In 2009, he lost in a graduation match test to Marcos Maidana, and media took issue with him not demanding to fight on, and not adhering to the Gatti credo of being willing to go out on his shield. More drama, when he dumped Robert Garcia, and enlisted brother Danny, for his next fight.

And then good drama, in 2011; his waltz with Andre Berto was Ring’s Fight of the Year. Nine months later, he got a Floyd Mayweather Lotto Ticket, but committed that cardinal sin, not protecting himself at all times while Floyd walloped him as he chatted with the ref.

The Ortiz detractors in 2014 hooted at him for not fighting on against Josesito Lopez, even though he said his jaw was broken. And then Luis Collazo kayoed him at Barclays Center and people left right and center, including his promoter, told him to retire. He didn’t listen… and once again said no mas, when asked if he wanted to fight on against Andre Berto in April 2016. Retire, dude, they said on Twitter. No, responded Ortiz, showing that weird/admirable chutzpah. He beat Saul Corral last year and gets back on the horse versus Alexander, 27-4, who is also kind of an “old” 31.

Ortiz at the Wednesday workout for media, in Texas, had this to say:

“I had a great training camp. I just made sure to listen to my coach every day and grind every day with my team. You really have to grind when people say this is your ‘last chance,’ because I’m not ready for that.

“Life tends to take you certain places and right now I’m where I’m supposed to be. I’m 31-years-old and I believe I’m going to be able to accomplish all my goals in this sport.”

And you decide…admirably upbeat or cringingly delusional?

“I’m thankful for the support of El Paso and I’m proud to be fighting in the main event on Saturday. We’re here to perform for everybody and have a great time.”

My three cents: My guess is everyone will have a great time watching Alexander, who should be able to be the better ring general and avoid power shots en route to a UD win, and Ortiz, because it’s an Ortiz fight. Drama is just about a given. How do you see this battle of ultra vet welterweights playing out, friends?