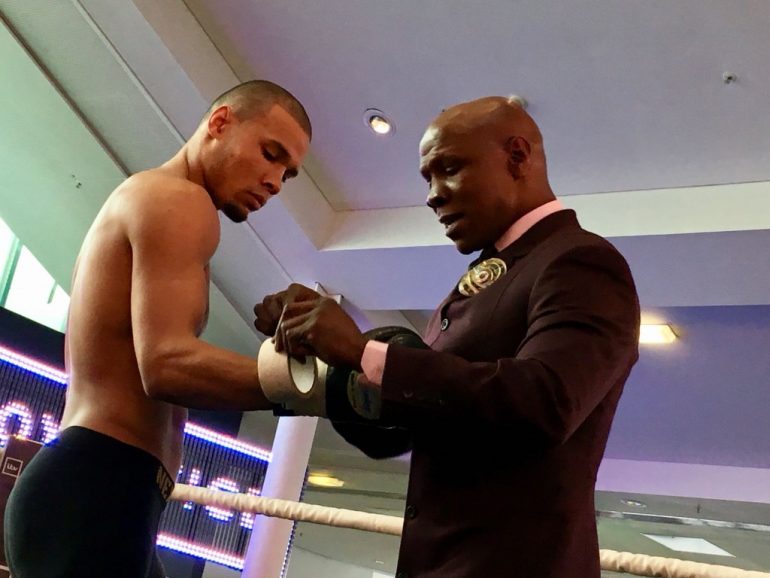 Chris Eubank is a former two-weight world titleholder, famed for the eccentric behavior, in and out of the ring, which helped make him a household name in the U.K. in the 1990s.

Eubank was born in Dulwich, South London, on August 8, 1966. He grew up with three brothers. His mother moved the family to Jamaica when he was just two months old before moving back to London when he was eight. As a youngster, the future world champion was never far from trouble and was suspended from school many times before finally being expelled.

“I was protecting kids who were being bullied,” Eubank told RingTV.com. “Even though I would get suspended and expelled for protecting these kids, I wasn’t doing anything wrong. At the time, I was the only one who knew that. It wasn’t trouble; it was actually putting trouble straight.”

After spending time in a children’s home, the 16-year-old Eubank was sent by his father, Irving, to live with his mother in the South Bronx district of New York.

This was when Eubank followed two of his brothers into the sweet science and trained out of the Jerome Boxing Club. He went on to win the (New York-based) Spanish Golden Gloves in 1984 and reached the semi-finals of the official Golden Gloves tournament. Eubank then turned professional, leaving the amateur code behind with a record of 19-7.

Eubank made his professional debut in October 1985, scoring a four-round decision over Tim Brown in Atlantic City. In fact, his first five fights took place in the U.S. before the eager young prospect decided to move back to the U.K. in 1987.

In 1990, Eubank, now a contender, stepped up the competition. He enjoyed a successful year, which culminated in a grudge match against bitter domestic rival Nigel Benn for the WBO middleweight title. Eubank upset “The Dark Destroyer” by ninth-round knockout in a classic contest.

In June 1991, Eubank entered another potent rivalry with countryman Michael Watson; a brilliantly skilled boxer-puncher with world-class skills. The two men fought their hearts out at Earls Court in London. Eubank would prevail in what the vast majority of U.K. media viewed as a highly controversial decision.

“I won, but people were blinded by their jealousy,” Eubank said. “People have a bigoted view. If you watch the fight back, you’ll see there’s no way he beat me. You have to remember when you’re champion your championship has to be taken from you; like he was proceeding to do in the second fight.”

Watson outboxed Eubank for much of the contest and was comfortably ahead on points entering the championship rounds. Sensing urgency, Eubank stepped up his attack and paid the price when Watson dropped him with a sharp right hand. But Eubank, on his last reserves, rose gamely and launched a ferocious right uppercut which floored Watson, causing his neck to impact the bottom rope. The damage was done and Eubank halted the stricken fighter early in the final round.

“It’s emotional. I can’t go through that right now,” said Eubank in relation to the life-changing injuries Watson suffered. 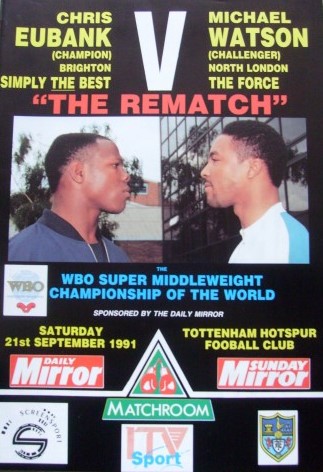 Those results led to a unification bout with old rival Benn who had picked up the WBC 168-pound title. That bout ended in a controversial draw, which Eubank now admits Benn should have won.

Approaching 30 years old, Eubank had made 14 successful defenses by the time he took on Steve Collins in Cork, Ireland, on March 18, 1995.

“I lost because the legend goes, ‘There is a man in Cork, who said ‘There is no way Chris Eubank wins this fight,’” said the former champion. “It was the weekend of St. Patrick’s Day. What is to be commended is the cojones of the man who was champion, who went into that lion’s den on St. Patrick’s Day, fighting an Irishman. That’s really the story.”

Both men were on the canvas, but it was Collins who won a close but unanimous decision that Eubank contests to this day. Two low-key wins set up the inevitable rematch in September 1995. This time, Collins edged a 12-round split decision.

Eubank retired briefly from the sport, but when former rival Collins surprisingly decided to retire for good, Eubank stepped in at short notice to face a young, up-and-coming Joe Calzaghe for the vacant WBO 168-pound title in October 1997. This was the acid test for the young Welshman.

“I was asked once, ‘When did you first come across Joe Calzaghe?’ And the truth is, no matter what I’d heard about him beforehand, it was all conjecture. He could have been built fighting fodder as far as I was concerned, because he hadn’t been proven. It was his first world championship fight when I fought him.

“The first time I actually came across him was when I was hit with this shot that put me on my back (in Round 1). I didn’t feel the seat of my pants hit the ground. I felt my shoulder blades hitting the canvas and that’s when I first met Joe Calzaghe [Laughs]. As he famously said to someone else, ‘If you think I slap when I punch, I’m going to slap you to death.'” 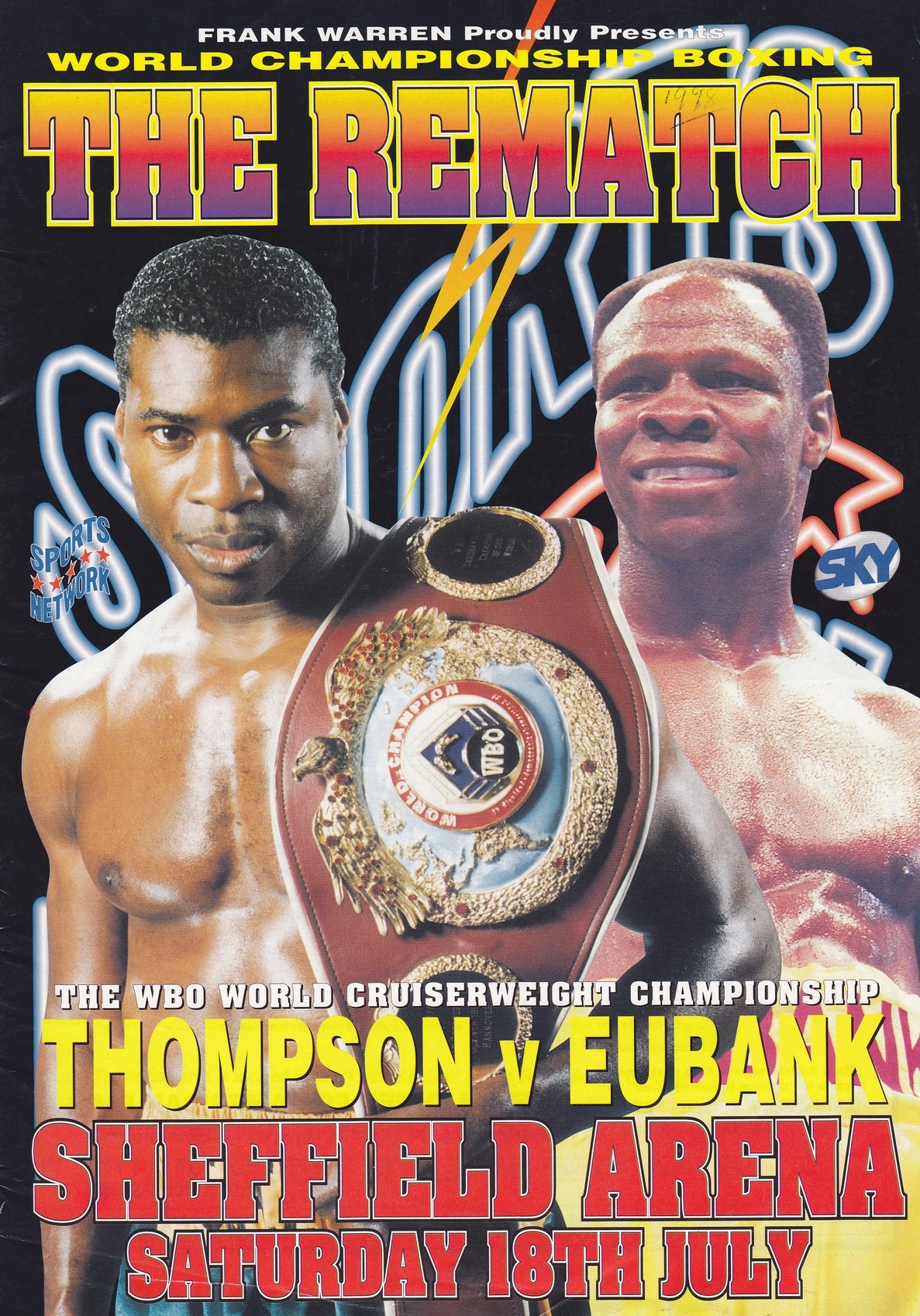 The pair met again three months later and it was another terrific fight. Eubank was ahead on points after nine rounds, but a grotesquely swollen left eye meant the fight had to be stopped in Thompson’s favor. This was the only time in his career that the iron-jawed Eubank failed to finish a fight.

Eubank retired for good with a record of (45-5-2, 23 knockouts) but he always remained in the public eye. He has appeared in several TV programs including, At Home with the Eubanks, Celebrity Big Brother and I’m a Celebrity…Get Me Out of Here!

One of Britain’s most decorated world champions is now 51 years old and lives in London. He has five children and the second eldest, Chris Jr., is currently ranked No. 5 by THE RING at super middleweight. He faces WBA titleholder George Groves in the semi-final of the World Boxing Super Series on Saturday. Eubank Sr. plays a pivotal part in his son’s career.

The former two-weight world titleholder graciously took time to speak to RingTV.com about the best he faced in 10 key categories.

BEST JAB
Dean Francis:
It was a sparring partner, I never fought him in a fight. Dean Francis had a jab that you couldn’t see coming. You couldn’t see it, because he never turned his elbow up. He effectively turned his fist, so you never saw it, it was too quick. It was a beautiful thing to experience, even the pain of them. I wouldn’t put anybody’s jab in front of Dean Francis’ jab.

BEST DEFENSE
Dan Schommer:
He totally had me off my guard and proceeded to give me a boxing lesson. He took one of my teeth out and they gave me the decision for which I apologized, maybe eight years ago. He’s now a successful businessman up in Canada. I found him and apologized for the judges robbing him of that fight. It was in Sun City, South Africa in 1995. You couldn’t hit him. He was always slightly out of range, which is why he was able to pick me off like he did.

FASTEST HANDS
Joe Calzaghe: I was in a fight where I knew when he dropped me in the first round that I would not get a look in until the 11th or 12th rounds. Five seconds before the bell rang I caught him, and he held on, but I took a real beating. For every one shot I was landing, he was landing four. You can’t beat speed and he had it in abundance.

BEST FOOTWORK
Dan Sherry: I fought (Sherry) in my first world title defense in Brighton in 1991. He was trained by a fellow, one of the greatest, Sugar Ray Leonard, and his footwork, if I remember correctly, was effective.

BEST CHIN
Eduardo Domingo Contreras: He was from Argentina. Contreras, by far, had the hardest chin. If you watch that fight, you’ll see what I mean. I dread to think how he is today. He took everything. I was landing with emotion [Laughs].

SMARTEST
Schommer: His entire act; the way he stood at the press conference, the way he spoke to you. There was nothing about him, he had no cut of a fighter. He was completely disarming. When you watch the fight, you see I get completely outboxed. I got the decision and accepted the decision, at the time, because I was the aggressor. But when you’re being picked off because you’re missing shots, you should not win the fight. I wasn’t being effective.

STRONGEST
Nigel Benn: If someone was strong, it didn’t matter because strength isn’t what it was about. You can’t beat me with strength. You can only beat me with skill and device. You can’t bully me and beat me, because I was technically competent. Nigel Benn, for instance, in the second round of (fight one), lifted me up in the air. I thought, ‘This guy doesn’t know what he’s doing’ because he doesn’t care about his charge. He’s burnt out a percentage of his charge. When someone’s over you, you always go limp, you never use your strength. That type of bravado is called stupidity. It’s always better to use technique. I’ve said many times before, I wasn’t that good, but I was intelligent.

BEST PUNCHER
Benn: I’ve never been knocked out, but I came near a couple of times. Johnny Melfah hit me with a shot in the third round at the Albert Hall and I sensed white light. But when Benn hit you, you stayed hit. The impact of the hit stayed with you for at least two-and-a-half seconds. Everybody else, when they hit you, that hit starts dissipating straight away. With Benn, it stayed for like two-and-a-half seconds and obviously, within a split-second, another (punch) would come because he punched in bunches. If you couldn’t hold one, there was no way you were going to hold two, and then it would be three or four. Benn, by far, hit the hardest.

BOXING SKILLS
Schommer: You couldn’t hit him; he was just slightly out of range. You’ve got to remember, it’s not just boxing skill, it’s also the intellect. Here’s a man who has disarmed you beforehand because he made you think he wasn’t anything special. I have to read another fighter and he’s the only fighter I read wrong. OK, and Joe Calzaghe, obviously. His boxing skill was exemplary. He was able to make me miss and pay. Michael Watson, the performance in the second fight, was comprehensively brilliant. He had taken the advice of the great Mike McCallum who said, ‘The only way to beat Eubank is to stay on him for three minutes of every round’ which I thought was impossible. That’s exactly what (Watson) did.