Brandon Rios believes he has one more run left as he returns to big stage vs. Danny Garcia 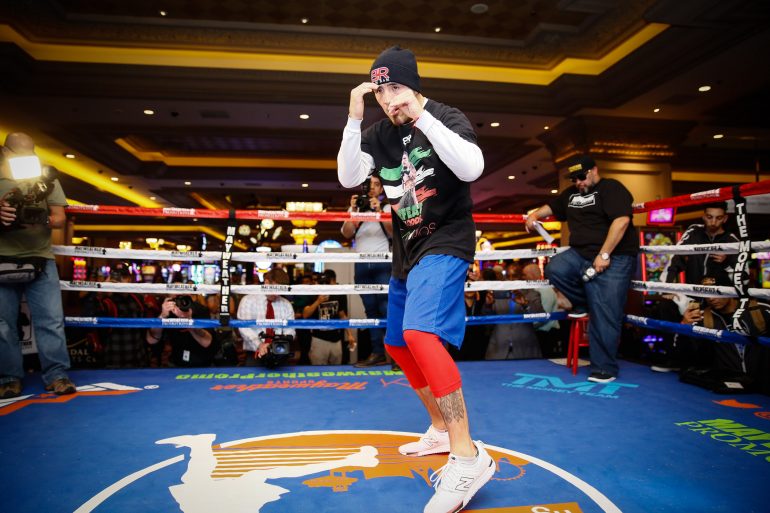 After over 11 years fighting professionally and countless more in the unpaid ranks, he called it quits. It was after Timothy Bradley laid a comprehensive beating on Rios that he realized it was over and announced his retirement swiftly at the post-fight press conference.

It didn’t stick, and Rios returned last year with a knockout of journeyman Aaron Herrera.

Rios insists that at 31, he returned to the sport for all the right reasons. To hush all his critics who believe he left so much of himself in countless wars in the ring, and that he’s simply a shell of his former self, the man whose relentless pressure made him a commodity in boxing.

Rios (34-3-1, 25 knockouts) is now thrust back into the spotlight with a Saturday welterweight showdown against Danny Garcia in Las Vegas. Matched up against one of the sport’s elite fighters, Rios is naturally a major underdog, an afterthought in Garcia’s comeback fight following the decision loss to Keith Thurman.

But Rios says those who dismiss his chances are “just adding fuel to my fire.”

“They’re making me stronger and making me want it more and making me more hungry,” Rios told RingTV.com. “When I win that fight, I don’t want them to jump on [the bandwagon]. It makes it more exciting, more intrigued to come in shape.”

That’s the biggest change, he says. Rios is already on weight three days out. He swore off alcohol a year-and-a-half ago. “Bam Bam” said booze brought nothing but “bad things, bad habits — it was messing me up.” His wife now makes his meals — healthy ones.

And that’s the main reason why Rios believes he still has enough left to fight on the top level, despite all the all-action brawls and punishment he’s sustained. The former lightweight titleholder’s preparation for Bradley was poor. He arrived at camp “really heavy and it took me forever just to lose weight.”

“I can’t do it the way I’ve been doing it,” said Rios, who is once again training in Oxnard, California with Robert Garcia, the man who led him to his title victories. “My metabolism slows down a little bit as I get older, you can’t fucking wait for the last minute and you’re not getting younger, so you gotta do it right. That’s what I’ve been doing.”

At first, he said he didn’t even really think about boxing. He had accomplished a lot and earned plenty of significant paydays, including $4 million for a lopsided loss to Manny Pacquiao. He’d thrilled the masses during his trilogy with Mike Alvarado, the first two of which are among the best fights of the past 10 years.

But “one day, something kicked me in my ass to say ‘that shit could be me still.'”

If he’s going to be something more than an opponent during the rest of his time fighting, he’ll have to perform well against Garcia, if not score the massive upset.

Otherwise, he’ll likely be used as a stepping stone for Al Haymon’s 147-pound prospects looking to make a name for themselves. Rios says the rest did him well and that he’s not washed up. That the excess weight he was carrying simply did him in.

We’ll see Saturday night, because if Garcia runs roughshod over Rios, this could very well be his last time fighting in the spotlight.

“Everyone knows the way I fight,” he said. “Going all out is my style. I’ll walk through brick walls to get the victory. Everyone will see on Saturday night the new and improved Bam Bam.”