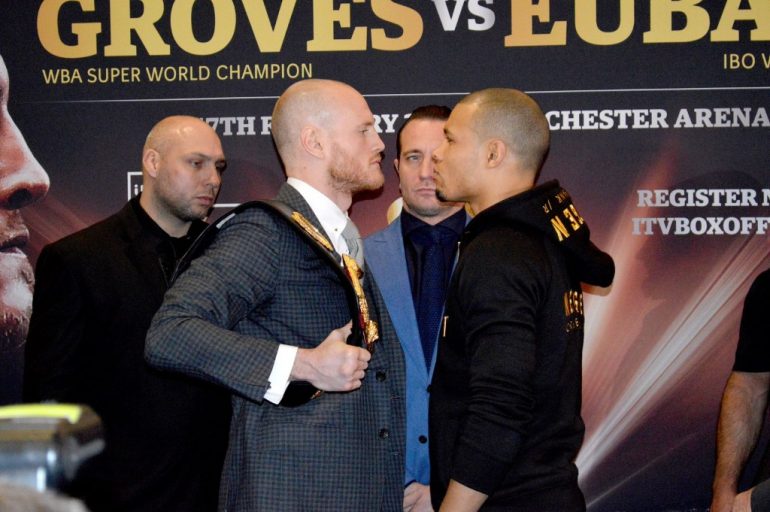 George Groves will defend his WBA super middleweight title against Chris Eubank Jr. on Saturday night at the Manchester Arena in Manchester, England, on Saturday and the grudge continues to build ahead of this hugely anticipated WBSS semi-final.

Groves, rated No. 2 by THE RING at 168 pounds, and Eubank, who is rated No. 4, have both been on the verbal rampage since the fight was confirmed in October. The time for talking will soon be over, however, and both fighters are confident of victory.

“I have been involved in big fights before and I’ve learned a lot along the way,” said Groves. “This is a tremendous fight, but it’s not my biggest fight to date. I am in the form of my life; certainly, I’m in the best shape I’ve ever been in through my career. I’m fully prepared to go out there and retain my world title in style.

“It’s not an expression that I particularly like but it comes down to levels and I’m levels above Junior. I’ve sacrificed a lot and I’ve been through some terrible times to get here. Desire is one thing I’ve always had in abundance. I’ve picked myself up from the lowest points and now I’m at the top and enjoying it. I won’t be taking my eye off the ball.”

“I’m the number one seed and I will go on to win this tournament and win it well. I started last year and will continue this week. I’m ready and hopefully, he is too.”

Eubank insists that he is ready for what he admits is the biggest fight of his career to date. Still, the Englishman appears unfazed about the task ahead and promises to justify the pre-fight odds which have swayed in his favor.

“What motivates me is becoming the No. 1 super middleweight in the world,” said Eubank. “This is my stage, my time, my opportunity to show everyone that everything I’ve been saying is real. It’s time to prove the doubters, the naysayers and keyboard warriors wrong.

“There is nothing George can do that is going to stop me. It’s collecting season and I’m coming for all the belts. After the tournament, every other belt holder is on the hit list. George Groves is just the first.

“The only thing (Groves’ trainer) Shane McGuigan needs to worry about on Saturday is having that white towel ready.”

For details on how to watch Groves-Eubank Jr. go to itvboxoffice.com