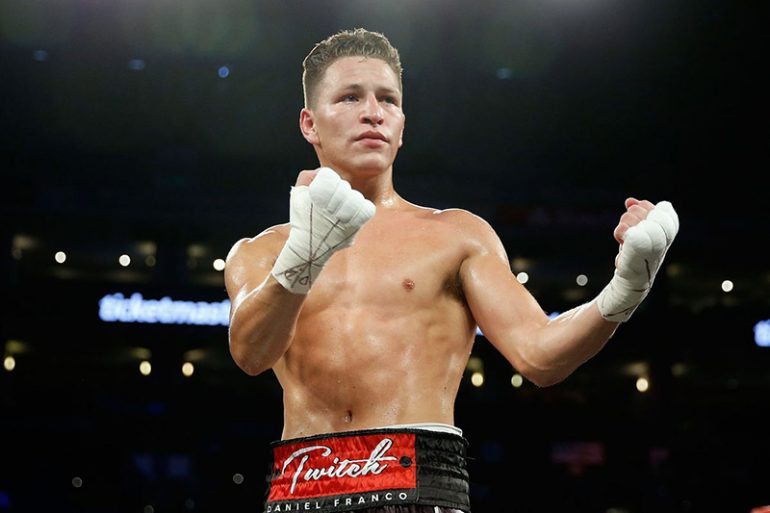 The reminder is a twisting, jagged scar. It runs about eight inches long and begins around the middle of Daniel Franco’s forehead and curves down behind his left ear, like a great fish hook. It’s what greets Franco each morning in the mirror. He laughs at the sight of it.

He has no memory of how the wound got there.

Maybe it’s what buoys Franco. Maybe it’s why he manages to somehow stay out of the angry vortex so many seem sucked into when they’ve been damned by misfortune. There is some frustration, Franco says. It pinches and prods him, lingering on his psychological periphery. Still, the true Daniel Franco, the positive, smiling, jovial Daniel Franco, the one he truly knows, hasn’t been tarnished. Scar or no scar.

By now, most fight fans know his story. The featherweight from Rancho Cucamonga, California, almost lost his life after suffering an eighth-round TKO loss to Jose Haro on June 10, 2017, at the WinnaVegas Casino in Sloan, Iowa. “Twitch” collapsed in the ring and was immediately whisked to a hospital where doctors performed brain surgery to relieve the swelling. He survived an induced coma that lasted over a week, and a near-fatal infection. He succeeded in coming out as close to intact as someone can from the type of traumatic brain injury that few survive.

Franco, who turned 26 on December 22 and underwent four surgeries to repair two brain bleeds, isn’t angry. No one would blame him if he was. Roc Nation Sports, the company that promoted him and is owned by billionaire music mogul Jay Z, have turned their backs on him. They didn’t even send him the usual promotional Christmas gifts, as they do with their fighters each year. Not even a holiday card. He’s buried under enormous debt of over $500,000 in medical costs.

There is no conceivable way to pay it.

And yet, Franco has returned to being himself. To being positive. He speaks in halting starts and stops, but he understands what’s being said to him and can respond.

Franco, who compiled a professional record of 16 wins (11 by knockout), two losses and three draws, just had a fragment of his skull surgically put back when RingTV.com spoke to him. However, while the ordeal has strained his psyche, it has not twisted his essence. This hasn’t beaten him.

Because of his indomitable spirit in the face of his nightmarish ordeal, on January 19, Franco was named the winner of the Boxing Writers Association of America’s 2017 Bill Crawford Courage Award.

“I can laugh now,” Franco admitted. “What are you going to do? I don’t how or why I’ve become positive. Maybe because it’s been ingrained in me ever since I was a kid. I just feel that if you don’t have a positive attitude nothing positive is going to happen to you. It couldn’t get any worse for me than what I went through already.

“Why dwell on it? The way you look at things is the way you feel. If you stay positive and look at things positively, that’s the way you’re going to feel. I was always positive growing up. I have a great appreciation of the boxing community. A lot of people have reached out to make sure that I was okay. I know how fortunate I am. I know that I’m lucky to be alive. I’m lucky to have the love of the people around me.”

A week after awaking from a 10-day medically induced coma, Franco was lying in the hospital and had to see the knockout that put him there.

“I saw highlights of the fight, because no one would let me see the [Haro] fight,” Franco said. “My family went out to eat and I asked my friend Kevin to see the fight. He wouldn’t let me see it, either. So, I grabbed my phone and Googled it. I just saw the knockout, and I like, ‘Wow, oh wow.’ To me, it was nuts, because I didn’t remember it. I haven’t seen the whole fight.”

Franco wants to return to school for his associates degree. A future goal is to help people who suffer brain injuries like his. On Christmas Day, Franco went deep sea fishing for the first time since he was 11. He had the whole Pacific Ocean out in front of him and felt the sun beating on his forehead, the wind, the boat rocking under his feet.

The tranquil moment gave him time to reflect on everything that happened to him in 2017—a year he can barely remember. He remembers gazing into the water, and then up at the horizon and how beautiful everything was.

“I went through struggles and I’m lucky that I made it through,” Franco said. “It was great to experience something that I haven’t done in forever. It does make you feel alive considering everything I’ve been through.”

Simple things, Franco says, he doesn’t take for granted. Small acts, like breathing. His timetable to start school has been thwarted by the medication he takes for seizures, making it impossible for him to drive. He still hasn’t heard anything back from Roc Nation whether they are willing to help defray some of the medical expenses and no one from Roc Nation returned any calls when they contacted for this story.

Franco is moving on. He refused to let his situation dictate to him.

“I’m still able to do everything I was able to do before the injury,” Franco said. “I’m able to love my girlfriend. I’m able to walk. I never thought walking would be something I was ever grateful for. I’m just not a fighter anymore. I’ve learned so much about myself and people in general.

“I’m not a fighter anymore.”

Franco is actually wrong. He’s still a fighter. That part of him will never change.

“It’s terrible I can’t compete anymore and I still want to be part of a team and be part of someone’s training,” Franco said. “My goal is make boxing better.”

His inspirational story already has.