Caleb Plant: Porky Medina does not have the will that I have 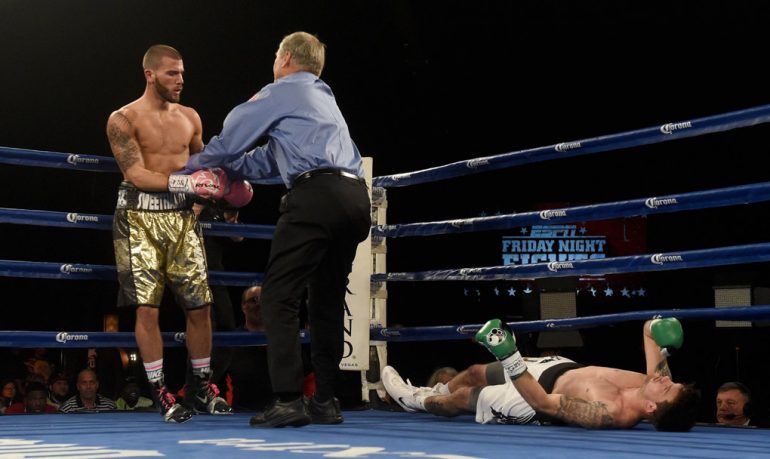 Undefeated super middleweight Caleb Plant looks to get one step closer to a title fight in an intriguing 168-pound mix when he faces Rogelio “Porky” Medina on the undercard of Devon Alexander vs. Victor Ortiz, which takes place at the Don Haskins Center in El Paso, Texas on February 17.

The winner will occupy the vacant No. 2 ranking spot for the IBF super middleweight title, currently held by Caleb Truax.

For Plant (16-0, 10 knockouts) , who resides in Las Vegas after spending most of his life in Tennessee, his fight with Medina may as well be a title fight.

“I treated this camp like every other camp and that’s like I’m preparing for a world title fight,” the 25-year-old explains. “The only way to get to a world title is to prepare like one.”

His fight with Medina (38-8, 32 KOs) will be a clash of styles as Plant is more of a boxer while Porky is known to plow forward and seeks to bludgeon his opponent. But for Plant, the contrast in styles could present excitement for those watching.

“There are really no secrets in this fight. Everyone knows what Porky is going to do and what I’m going to do,” Plant tells RingTV. And if that’s the case, Plant fully intends to put on an entertaining display of fireworks on February 17. “I’m into putting shows on. Anybody who has seen me fight has been excited. I don’t think I’m going to have to try too hard. It’ll happen naturally from the differences in styles.”

But there’s also something else that the fighter known as “Sweet Hands” has as an advantage over his opponent: the will to win.

“At this point it’s just a battle of wills,” he says. “As tough as he is, I don’t think he has the will that I have. After all the things I’ve been through, I think the A-side has a stigma of having it easy and that’s not true.”

Plant may have the struggling fighter story that others boxers in his position have in common. He grew up in the impoverished confines of Tennessee with a father who took odd jobs while trying to maintain a career as a kick boxer. The younger Plant travelled with his father to his fights and eventually found himself in a gym following in the footsteps of his dear old dad. After starting as a kick boxer and being a five-time world champion, Plant shifted gears to boxing and eventually found himself as an alternate for the 2012 Summer Olympics.

But there’s a wrinkle in this story that presents Plant as a man who has certainly endured something different than most of his opponents. And that’s the passing of his 19 month old daughter in January 2015 due to an unknown medical condition that caused seizures. He has her name tattooed on his arm to remind himself what he’s fighting for and that nothing will be more challenging than dealing with that loss.

“For a lot of people, boxing is the hardest thing that they’ve ever done. But not for me. Not by far,” Plant explains. “When your daughter is on life support five different times and all five times you are brought into a room to be told that your daughter is going to pass away, that will make you grow grey hairs. She had multiple seizures every day and no motor skills. When you go through things like that there is no pressure under the lights. I’m doing what I want to do. That’s not pressure to me.”

Plant is confident that he’ll leave Texas with his undefeated record still intact and he’ll immediately turn his attention to Truax, who he reveals that he’s not too fond of.

“He had a lot of bad things to say about me when I had 12 fights and he had nearly 40, that’s not really a good look,” he says. “But now that I’m on his front porch, knocking on the door and asking if he can come out and play, we’re going to see if he really backs that up. If he can hold the belt in his upcoming rematch with James DeGale, instead of talking tough on social media, let’s see it happen in the ring.”

It’s obvious what Plant is after, and he’s clearly determined to get it. Whether or not Medina will have the will to stop him will be left up to the two pugilists when they step into the ring this weekend.